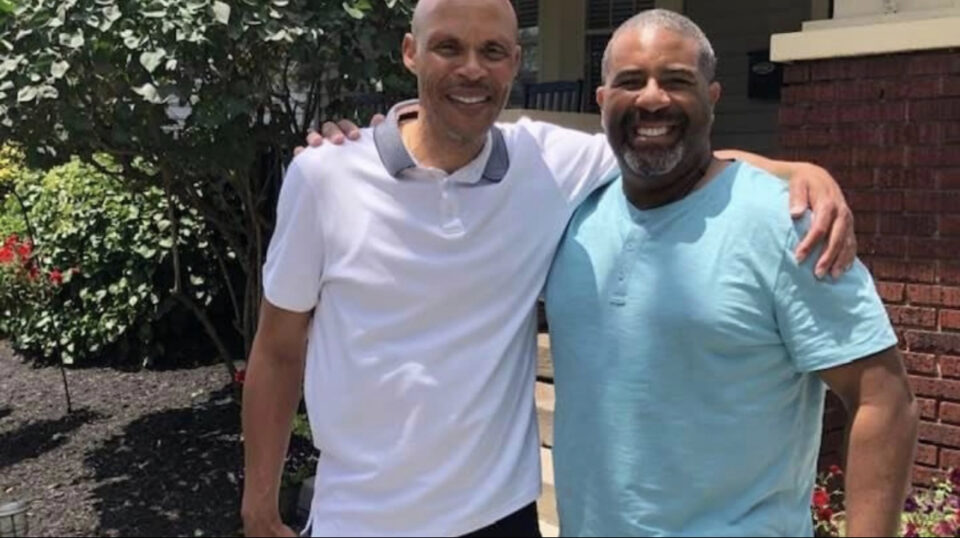 Over 20 years later, two former college roommates are still showing up for one another in more ways than one.

Dr. Richard Koonce and Steven Robinson were students at HBCU Norfolk State University and working as bartenders when they met. As their relationship blossomed into a genuine brotherhood, Koonce introduced his former roommate to the woman who would become his wife, Natalie Robinson. The old pals hadn’t seen each other in over two decades, but Facebook, texts, and occasional phone calls kept them connected.

Nearly two years ago, Koonce, an adored basketball coach in Sandusky, Ohio, was diagnosed with primary schlerosing cholangitis (PSC), a chronic and incurable liver disease that leads to scarring of the liver and the deterioration of the bile ducts. Koonce had been receiving treatment from the Cleveland Clinic when he opted to go the living donor route instead of a deceased donor’s liver.

It was during a family trip to Sandusky that Robinson decided to visit Koonce, who finally shared his health struggles. After realizing they had matching blood types, Robinson, a NewJersey native and president and creative director of Lucid DGTL Design Studio, tells BLACK ENTERPRISE he immediately looked into how he could get approved to help his brother “get on the road of a healthy recovery.”

With the enthusiastic support of his family, Robinson was also approved to be a donor. He has since traveled to Cleveland and undergone extensive testing, including cardio exams, liver biopsy, MRI, and more to ensure clearance for the transplant surgery.

The liver transplant surgery will take place on Valentine’s Day, February 14. He said that his unconscious decision of the date could be “another loving brother moment.”

“It’s about all of the people you don’t realize who have love for you until you’re facing hardship or a crisis, and those people step up to show you how much you mean,” Koonce says.

“The date of Feb. 14 is representative of all those blessings and more!  Ultimately, it’s simply about the most important gift that we can ever give each other, and that is love,” adds Koonce, who credits Steve’s love and God for his most recent blessings.

A GoFundMe page has been organized by Koonce’s colleague and friend to help with the costs both families have mounted and will continue to face with procedures and follow-up appointments.