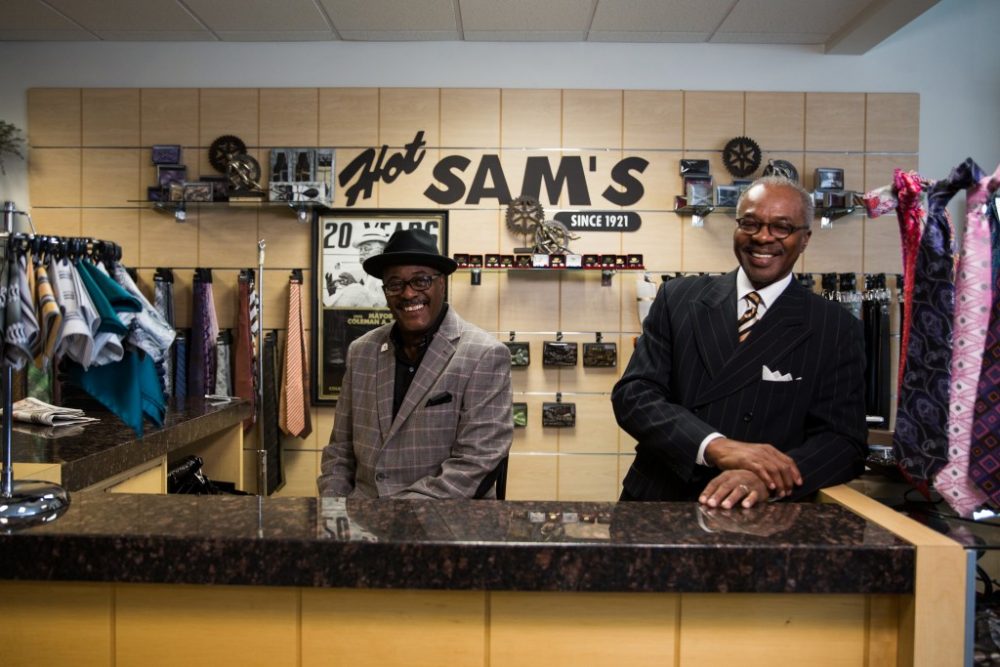 (Hot Sam's, the oldest men’s clothier in Detroit, is part of the funding program. Image: detroitdevelopmentfund.com)

The Entrepreneurs of Color Fund in Detroit, a popular financing tool for minority-owned businesses in the Motor City, is growing nearly three times bigger. Two supporters of the fund, JPMorgan Chase and the W.K. Kellogg Foundation, announced this week (Dec. 13)  that the fund will be expanded from $6.5 million to over $18 million immediately, courtesy of new investments by existing backers and first-time investors.

A strong demand for capital and a continued effort to help Detroit minority small businesses benefit from the city’s economic comeback are contributing factors why the fund is being expanded.

Creating New Jobs and Goods in the Motor City

“Our Entrepreneurs of Color Fund has created great economic opportunity for minority-owned small businesses in Detroit this year,” stated Ray Waters, president, Detroit Development Fund. “This expansion of the fund will create countless new jobs and bring new goods and services to even more neighborhoods in the coming years.” The Detroit Development Fund facilitates the Entrepreneurs of Color Fund.

To fuel the ongoing demand of the successful fund, JPMorgan Chase and the Kellogg Foundation each are making new investments of $2 million and actively recruiting new funders to significantly increase the fund’s size. New investors, Fifth Third Bank and the Ralph C. Wilson Jr. Foundation, are, respectively, investing $3 million and $2.5 million. Another new investor, the Kresge Foundation, has committed a loan guarantee up to $2 million. The new investments are expected to encourage other investors to support the fund.

Detroit Mayor Mike Duggan and JPMorgan Chase Chairman and CEO Jamie Dimon will discuss the fund expansion today. “We’re doing everything we can in Detroit to create more opportunities for people of color and providing entrepreneurs greater access to the small business capital they need to succeed is helping us accomplish that,” Mayor Duggan stated.

He added, “Detroiters who’ve opened or expanded a small business already have created hundreds of jobs.  We need more, so I’m very grateful to JPMorgan Chase for encouraging investors to work together and grow the Entrepreneurs of Color Fund, and for its ongoing support in the revitalization of our city.”

JPMorgan Chase and the Kellogg Foundation provided grants, respectively, of $3.5 million and $3 million in 2015 to establish the Entrepreneurs of Color Fund. The  Kellogg Foundation provided another $450,000 grant in 2016. The new investment by JPMorgan into the fund is part of the nation’s largest bank’s five-year $150 million investment in Detroit.

“Thanks to this fund, minority-owned small businesses are rebuilding homes, repairing streetlights, and opening neighborhood retail stores, and their entrepreneurial spirit is a big part of Detroit’s continued comeback,” stated Dimon of  JPMorgan Chase. “When a fund like this is successful, we want to help it reach more small businesses and that’s exactly what we’re doing by encouraging investors to collaborate and taking this model to help entrepreneurs in San Francisco and the South Bronx next year.”

There are about 50,000 minority-owned small businesses in Detroit, making it the fourth largest city for minority entrepreneurship. The fund is designed to increase economic opportunity by providing these businesses with greater access to capital and business assistance, allowing them to grow, hire locally, and further contribute to the city’s economic recovery.

Spending at Detroit small businesses has grown significantly—from down over 4% in early 2014 to up 4% in mid-2016, according to the JPMorgan Chase Institute. Some 58% of consumer spending took place at small businesses in the city, which is 20 percentage points higher than the average small business spends across 14 other major U.S. cities.

“The Kellogg Foundation developed and initiated this fund to dramatically change the wealth trajectory of people of color in the city and its neighborhoods,” stated La June Montgomery Tabron, WKKF’s president and CEO. “Our commitment to the Entrepreneurs of Color Fund provides a pathway for community ownership, better jobs, and more opportunities. The goal is more equitable economic development and an increase of quality of life for the people of Detroit and their children.”

The fund offers loans from $50,000 to $200,000. It provides business assistance to Detroit entrepreneurs of color, allowing them to grow, hire locally, and further contribute to the city’s recovery. To date, the fund has lent or approved $4.5 million to more than 43 minority small businesses, resulting in over 600 new or preserved jobs. Some 53% of the loans are supporting minority women-owned businesses while 70% of the loans have supported small businesses based in Detroit neighborhoods.

“While access to capital is a critical piece of the puzzle for many small business owners to grow and innovate, the connections this fund provides to marketing, accounting, and other business services can also lead to long-term growth and sustainability,” said David Egner, president and CEO of the Ralph C. Wilson Jr. Foundation.

The fund is one way to ensure more Detroiters share in the city’s continued economic recovery, and the unique and scalable structure of the loan fund and technical assistance it provides has become a model for how to help minority entrepreneurs expand in other cities.

“Detroit’s full and inclusive recovery depends on its longtime residents and small businesses having access to capital to launch or expand businesses, create jobs, and spread economic vibrancy throughout the city,” said Rip Rapson, president & CEO of The Kresge Foundation. “We’re proud to back this fund with a guarantee that will do just that by unlocking millions of additional dollars.”

Fifth Third Bank hopes its $3 million contribution to the fund will help minority small businesses thrive. “Building and maintaining strong communities is at the heart of what we do,” said Greg Carmichael, president and CEO, Fifth Third Bank.

Established in 1996, the Detroit Development Fund aims to “improve the quality of life for residents in underserved Detroit neighborhoods.” A 501(c)(3) and certified as a CDFI, DDF provides term loans and lines of credit to small businesses, small contractors, and for-profit and nonprofit affordable housing developers. It currently manages $23 million in loan capital. More details and information about the Detroit Development Fund and the Entrepreneurs of Color Fund can be found at www.detroitdevelopmentfund.com.