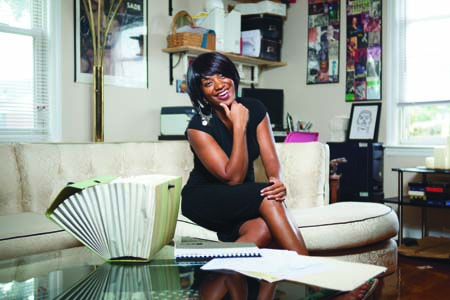 Forty-one-year-old Chris White’s annual income has ranged from $50,000 to $80,000 since she began working as an engineer in 1993. However, even with a good salary, the Woodbridge, New Jersey, resident has been unable to accumulate wealth. “I need someone to help me evaluate where my money is going because I can’t seem to build on my savings goals,â€ says White.

In addition to her job as an office manager at a tax consulting firm, where she now earns an annual salary of $53,000, White makes almost $5,000 bartending part time. She used to run a check-cashing business in Jersey City, New Jersey, for five years. But her entrepreneurial aspirations came to an end in 2009 when she was forced to file for bankruptcy to pay off $90,000 in business loans and personal and business credit card debt after being robbed. “One weekend I pulled out $50,000 on three different cards to remain in business,â€ says White, recounting her efforts to keep the business afloat.

White, who at one time had a credit score of 710 before filing for Chapter 7 in December 2009, quickly rebuilt her credit from the 500-range after the bankruptcy was finalized in April 2010 to 680 today. Since then, she has focused on rebuilding her credit by taking out and repaying two small $500 loans from the Intersect Fund in New Brunswick, a nonprofit that lends to small businesses that have experienced financial hardship to help them rebuild their credit. She also has a secured Visa card with a $300 limit, which she makes sure is paid in full each month, and she pays her $330 car note on time.