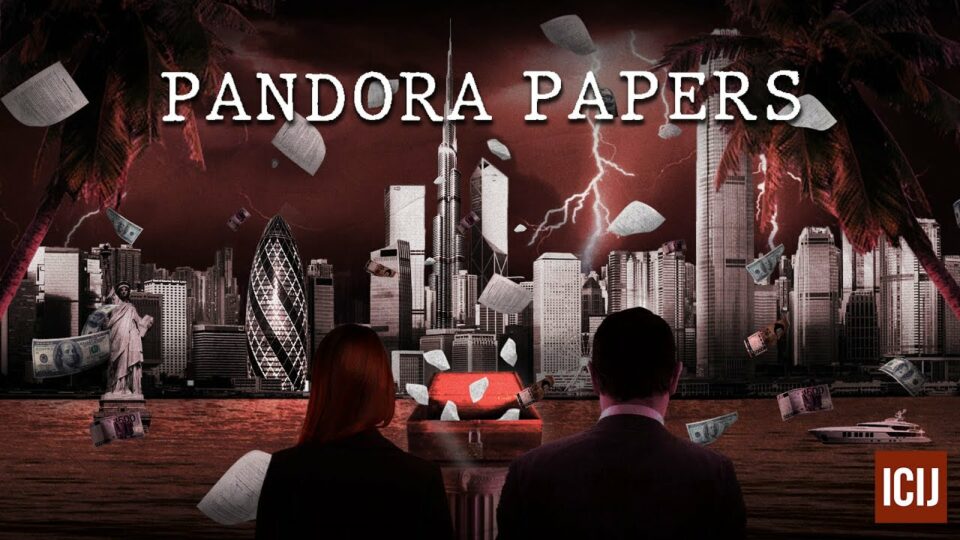 (Image: ICIJ)
Hundreds of people, including politicians, business leaders, celebrities, and billionaires, have been linked to such shady accounting practices as keeping assets secret, avoiding taxes, and buying land.
The findings come from the “Pandora Papers,” a new investigation based on a leak of confidential records of 14 offshore service providers that give professional services to wealthy individuals and corporations seeking to incorporate shell companies, trusts, foundations, and other entities in low- or no-tax jurisdictions.
The massive report, which included a review of nearly 12 million documents, lists Elton John, Shakira, and Ringo Starr among those being targeted.  The report, released Sunday by the International Consortium of Investigative Journalists (ICIJ), involved 600 journalists from 150 media outlets in 117 countries.
Not long after the report’s  publication, at least eight national governments promised to launch their own investigations into the financial activities disclosed in the papers.
According to the ICIJ, Kenyan President Uhuru Kenyatta’s family has been accumulating a fortune in offshore tax havens for decades. The Pandora Papers show the family owned at least seven entities based in the British Virgin Islands and Panama, two well-known tax havens, the ICIJ reported.
The offshore businesses have assets worth more than $30 million, the ICIJ reported. Kenyatta, who has vowed to fight corruption in his country, is the son of Kenya’s first president after its independence
Most of the family’s companies were created before Kenyatta was elected president, the ICIJ reported, and documents show that some remained active after he took office.
Kenyatta told CNN that he would “respond comprehensively” to the Pandora Papers once he returns from a foreign trip.
Over  330 current and former politicians identified as beneficiaries of the secret accounts. They include Jordan’s King Abdullah II, former U.K. Prime Minister Tony Blair, Czech Republic Prime Minister Andrej Babis, Kenyan President Uhuru Kenyatta, Ecuador President Guillermo Lasso, and former associates of both Pakistani Prime Minister Imran Khan and Russian President Vladimir Putin
“The new data leak must be a wake-up call,” said Sven Giegold, a Green party lawmaker in the European Parliament. “Global tax evasion fuels global inequality. We need to expand and sharpen the countermeasures now.”