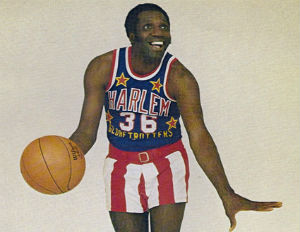 According to reports, 83-year-old Meadowlark Lemon passed away in his home in Scottsdale, Arizona, on Sunday, Dec. 27. His death (cause remains unknown) was first announced by the Harlem Globetrotters, and was later confirmed by his wife, Cynthia Lemon.

Lemon was the ringmaster of the Harlem Globetrotters (known as the “Clown Prince” of the team) and became a household name; having toured and played in more than 16,000 games, including 7,500 consecutively.

“My destiny was to make people happy,” Lemon stated during his induction ceremony to the Naismith Memorial Basketball Hall of Fame in 2003.

Born in 1932 in Wilmington, North Carolina, Lemon went on to attend Florida A&M University, and was later drafted into the U.S. Army for two years. Â At age 22, Lemon sent his first application to the Globetrotters in 1954. The following year, he was chosen to play. In 1980, he left to form one of his Globetrotters imitators, the ‘Bucketeers’, with whom he played until 1983. In 1984, he moved on to play with the Shooting Stars for three years. In 1987, Lemon moved on to yet another one of his new team endeavors: Meadowlark Lemon’s Harlem All Stars. Despite touring with his own team, he returned to the Globetrotters in 1944 and played 50 games.

Lemon was also the recipient of many awards, including the John W. Bunn LifetimeÂ AchievementÂ Award, the highest honor given by the Naismith Memorial Basketball Hall of Fame outside of induction. He was inducted into the hall three years later.

In addition to being an ordained minister, he published the memoirÂ Trust Your Next Shot: A Guide to a Life of JoyÂ in 2010, recalling his days with the Globetrotters. He spent his later years as a motivational speaker, traveling the country and speaking with children at various basketball camps and youth prisons.

Lemon is survived by his wife, ten children, his ministry, and beloved fans.