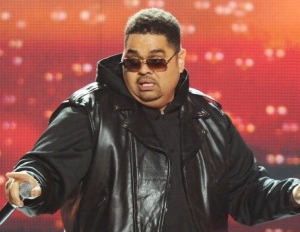 Just one day after losing legendary boxer Joe Frazier, and on the evening that rappers Jay-Z and Kanye West storm New York’s Madison Square Garden for their “Watch the Throne” tour, the music industry mourns the sudden death of rapper Heavy D. The rapper, whose real name is Dwight Arrington Myers, collapsed Tuesday morning and was rushed to the emergency room at Cedars-Sinai Medical Center after a neighbor near his Beverly Hills home called an ambulance. He was pronounced dead at the hospital. At press time, cause of death was still unknown. Heavy D recently performed on BET’s Hip Hop Honors and reportedly had a new album in the works.

Joe Frazier, the heavyweight champion most famous for handing Muhammad Ali his first defeat, died Monday night after succumbing to cancer. He was 67.

Frazier was diagnosed with cancer last month, according to his personal and business manager. Through September, Frazier had been doing regular autograph appearances.

Leslie Wolff, who has been Frazier’s manager for seven years, said the boxer had been in and out of the hospital since early October and receiving hospice treatment until the last week of his life.

The Appeals Court for the District of Columbia Circuit upheld a lower court’s ruling that found the new healthcare law’s minimum coverage requirement constitutional on Tuesday.

The appeals court agreed with the lower court’s ruling saying it was constitutional to require Americans to buy healthcare insurance coverage by early 2014 or face a penalty. The court dismissed a lawsuit challenging it.

The Obama administration sought the new law to curb soaring health care costs and to increase coverage for the more than 35 million Americans without healthcare insurance.

The Smithsonian Portrait Gallery in Washington, D.C. is getting a burst of color.

The ‘Black List’, a collection of large-scale photographs from Timothy Greenfield-Sanders‘ project, features 50 of the nation’s most prominent African Americans–think: Whoopi Goldberg, Diddy, Serena Williams and Hill Harper, to name just a few.

“We are apart of this country’s history. For us to occupy such a large space in The National Portrait Gallery is apropos,â€ said Harper, an award-winning actor and bestselling author.

See more about the exhibit at BET…

New data released by the Census Bureau on Monday showed the number of American poor reached a record 49 million, or 16%, in 2010. The Census Bureau calculated the statistics under a new measure aimed at showing a fuller picture of poverty in the United States.

The biggest rise occurred among people ages 65 and older who are being driven into poverty by out-of-pocket medical expenses, including premiums and co-pays from the federal government’s Medicare program for the elderly. Almost 16% of the elderly are living in poverty. That’s roughly one in six senior citizens.