The Hidden Genius' of Oakland, California 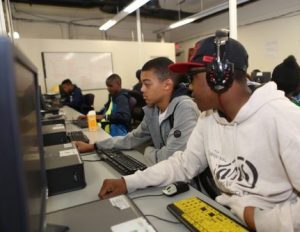 When Jason Young moved to Oakland, California to found his company, Mindblown Labs, he saw that the city was rapidly changing, and a lot of that change was being driven by prosperity. However, there were certain populations and demographics within Oakland that were being left out, particularly young black males. Young set out to change that through the creation of The Hidden Genius Project. He hypothesized that by teaching young black men critical thinking skills, problem-solving skills, creativity, and giving them access to the right networks, they could attain the same amount of success as their counterparts.

In 2012, Young and co-founders Tracey Moore, Kilimanjaro Robbs, Isaak Hayes, and Kurt Collins focused on bringing these young men the resources and training that they needed, by providing them a safe space to learn and create their own projects, through the utilization of technology.

One of the most difficult challenges of getting this company off of the groundÂ was that the founders were extraordinarily, overly committed, as they were working on multiple projects, including their own technology startups. In order to mitigate this issue, they brought on their first employee, Brandon Nicholson, who is now the executive director.

With roots in Oakland, Brandon, a former Ron Brown scholar, who attended Princeton, and completed his doctorate at UC Berkeley in education policy, seemed like the perfect fit. Because of his background, he was tasked with advising the educational component and structure of the organization, upon joining the team in 2012. He now operates the day-to-day functions, focusing on all things managerial.

This program is no walk in the park, and it is not to be taken lightly. With an intensive immersion program focused on rising ninth through eleventh graders, students are asked to make a commitment of 15 months, including two total summers at 40 hours a week for seven weeks, one after school session per week during the school year, and one Saturday per month. In addition, they must come in for regularly scheduled office hours. This culminates in students building their own software projects, pitching them, and presenting introductory business plans. Most importantly, they have a strong peer network, along with an overall sense of community and commitment to being agents of positive change.

So far, the program is experiencing tremendous success, in addition to witnessing results that were not predicted. Leaders of the organization are seeing growth in the students’ skill development, and in their ability to build and design projects. Student participants also have an increased sense of self-confidence, due to their ability to navigate the technology spaceÂ and reach their goals in general. “Fundamentally, we’re a youth development organization that integrates technology and entrepreneurship skills,” says Brandon.

Leadership takes precedence within the organization. “The hardest part of our work is working with the students to navigate everything that’s going on around them, teaching them to create a sense of communal identity, and helping them envision their own success and actions. [It’s] not [about] just having an impact on the community, but also being a reflection of the community.â€ Â

Within the first two cohorts of 15 total students, without any real employees, all but two finished the then 24-month program. Currently, with the third and fourth cohorts and staff on hand, they are at 100% retention, with all students not only completing the 15-month program, but also graduating high school. Additionally, all of the traceable alumni who are of age from the first two cohorts have entered post-secondary education, and the organization is on pace to serve about 1,000 students this year, throughout all of their programs and partnerships combined.

The goal over the next five years is to expand. Jason and Brandon see The Hidden Genius Project going nationwide to serve black males who not only would work in the tech industry, but who could also become entrepreneurs and create companies lead by diverse founders.

“We want to establish ourselves as ‘thought leaders’ in the space, and not just focus on training young men, but creating systems that allow us to really scale our impact. Through cultivating talent and maintaining partnerships with school systems and other organizations, the goal is to have an impact that will reach far beyond the thousands of young men that we serve,â€ says Jason.