His Favorite Girl! Nick Cannon Pays a Visit to Honor His 102-year-old Great-Grandma 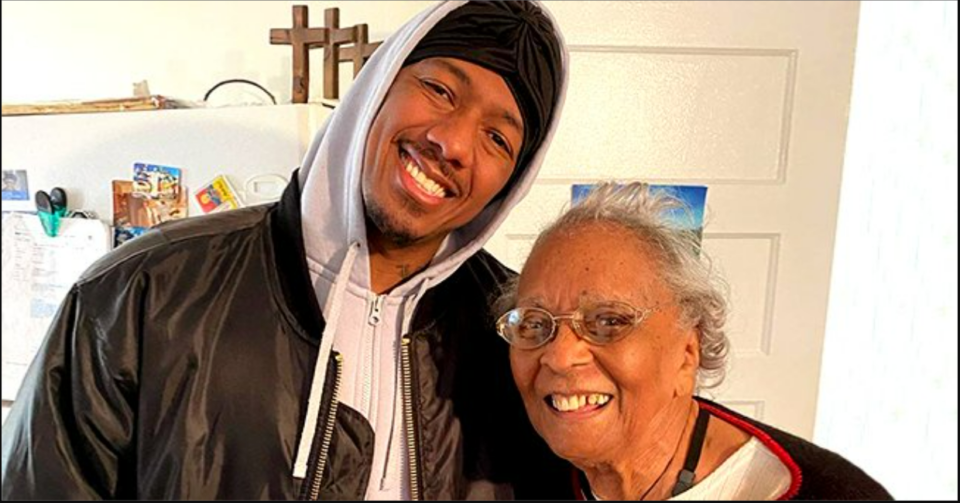 Television host and media personality Nick Cannon took a beat from his busy life and being a baby daddy to take a trip to North Carolina to honor his 102-year-old great-grandma.

Corinne is a beloved community advocate and was being honored for her dedication and work and joined by her grandson Cannon and his dad.

According to an excerpt of the book, “Legendary Locals of Cabarrus County” by Michael Eury, Corinne was quite the local legend of her town fighting for civil rights.

“The first African-American woman to be hired for a Cannon Mills production position, Mrs. Corine Cannon withstood resistances from some white workers during her 1963 arrival at the mill. Piercing glares of disapproval were often accompanied by whispered remarks or vocal taunts. A white supervisor recommended that Cannon turn the other cheek and not respond, but to privately report abusive whites. Cannon Mills’ plants were segregated when she joined the workforce, including the restrooms, but Mrs. Cannon was soon followed by more women of color and later, black men in management positions.”

A Busy Man Building An Empire

While Cannon has been the topic of several headlines, including the most recent revelation on his talk show that he’s expecting his eighth child, he still continues to take care of his business.

As previously reported, in an interview with Afro Tech, the longtime entrepreneur discussed his current and future business ventures. His biggest venture yet, Cannon told the outlet, is that he has built a billion-dollar business out of his hit show, Wild n Out. The success was a result of making necessary moves on his own.

“I’VE TURNED ‘WILD ‘N OUT’ INTO A BILLION-DOLLAR BUSINESS, AND THAT’S ONLY BECAUSE OF THE ENTREPRENEURIAL EFFORTS THAT WE PUT FORWARD,” CANNON SAID.

“There were many times when people didn’t believe me from the beginning. I funded Wild ‘N Out on my own because MTV didn’t understand it or know what it was. Therefore, I kept the ownership for years until the big boy came around and I had to charge them double for the bag.”

Cannon’s penchant for success is in his blood!