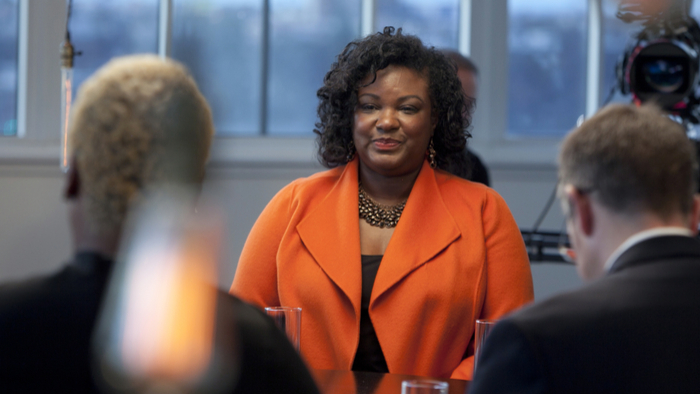 She will lead an influential, newly formed 11-member board for the Dallas-based company. Aventiv calls itself a multi-million dollar firm that promotes rehabilitative justice. It helps former inmates gain access to business, job training, and educational resources to effectively build their skills to re-enter society.

Hodge is the president and CEO of Mission: Launch, a Baltimore-based nonprofit that works with financial institutions to help formerly inmates gain start-up capital to start businesses. She too is the CEO of R3 Score, an alternative background check firm.  In June 2021, she was named on the Forbes inaugural 50 Over 50 list of women business executives and activists. A nationally recognized re-entry advocate,  Hodge was featured in this BLACK ENTERPRISE piece.

The advisory board has some heavy hitters. They include the former president of the National Bar Association, the top executive of the Hispanic Heritage Foundation, and a former Federal Communications Commission leader. They too include former executives from GE and IBM, U.S. Department of Labor senior officials, community activists, and public policy experts. Check out the members here.

The advisory board will work with individuals in prisons, their loved ones, community leaders,  government agencies, and reform advocates. Their efforts are aimed to help Aventiv improve the lives of those impacted by the criminal justice system.

Hodge reflected on her role in a statement.

“I have committed myself to reducing the harm prison causes to individuals and their families, especially children.  The fact is our prison system makes reentry incredibly difficult. I am pleased to play an impactful role in helping Aventiv use its place inside facilities to improve outcomes for justice-involved families and cement the foundation for systemic change. Once part of the problem, Aventiv is now part of the solution.”

Statements from Adventiv CEO Dave Abel included, “We have undertaken an ambitious transformation to make investments work for all the people whose lives are affected by the criminal justice system,” he stated. “These changes were long overdue. Now we’re investing hundreds of millions of dollars in a broader suite of technology products and services that support communications and education, reentry, and rehabilitation. We are very fortunate to have a stellar group of advisors in our boardroom.”