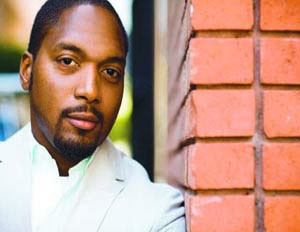 Activist Bryant Terry wants to improve people’s lives through food. So for the past decade he has been advocating for a fairer food system–one in which low-income communities and people of color have access to fresh, healthy, local food–and then showing people what to do with that food once they get it.

BlackEnterprise.com: A lot of people have no idea what a food justice activist is.

Terry: The work I do is responding to the health crisis among Americans. And much of this is connected to what we’re eating. I started off as a grassroots activist, working in communities, specifically with young people that were being impacted by the overconsumption of fast food, packaged foods, and processed food. We needed to empower them to make, select, and prepare fresh healthy food but at the same time we had to empower them to take charge in bringing more options for getting this food in their neighborhood. But I wanted to make a wider impact. For me, cookbook writing is a form of activism; through my books I hope to move people to change their habits, their attitude, their politics.

What led you to tackle these issues?

I always go back to my childhood in Memphis, Tennessee, having grown up with grandparents who came from rural Mississippi and had backyard gardens. So I felt like young people living in concrete jungles were missing something. But it also came from a political awakening. I was looking back at the work the Black Panthers were doing–their free breakfast for children, their grocery giveaway–and they were directly responding to the same issues: malnutrition, the impact of institutional racism, and trying to empower low-income communities of color.

How do you make the average person understand that they should care about this?

Personally I can say that I don’t care how healthful or environmentally responsible or ethical or humane the food is, if it doesn’t taste good then I don’t really care about it. And this is coming from someone who does this work. People want to have delicious food. The food that we buy in the supermarket is typically shipped across the country, sitting in trucks and in refrigerators and in warehouses sometimes days, week, months. If you use food that’s local, from your farmer’s market or better yet food that you grew at home, it’s going to be so much more flavorful.

Do you think people are getting the message?

There is more research showing that vegetarian diets are helpful as ways of controlling a number of illnesses. Then you have people like Oprah Winfrey doing a vegan diet. So it’s moving from the margins closer to the mainstream. I don’t think it’s as scary as it once was. And I don’t think that everybody feels like it’s a white hippie diet.

You’ve said before that African American food has been vilified.

Some people actually think that African American cuisine consists of fried chicken, red velvet cake, and macaroni and cheese. Yeah those are the kinds of food we ate on holidays. But the food we ate at home on a daily basis, the kind of food that I’m promoting–fresh black-eyed peas and butter beans and collard greens–are the types of food that any physician who’s in tune to diet will tell you that everyone should be eating. And these are the types of food that we ate traditionally; these are country cooking.

Terry, along with other food industry professionals, will be profiled on BlackEnterprise.com throughout this month, in conjunction with Black Enterprise magazine’s November 2011 “A Passion for Food” issue.