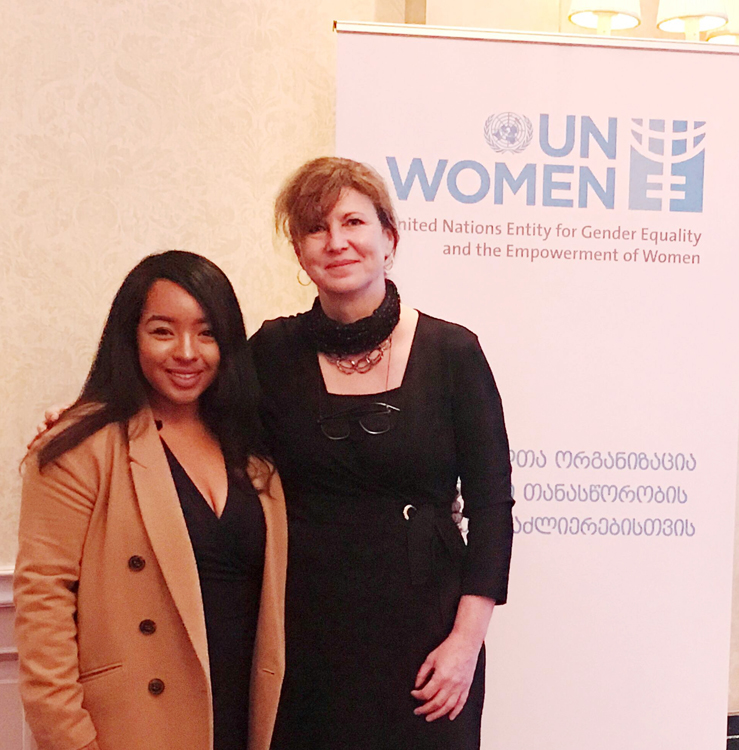 (Ward with UN colleague in Tbilisi)

Meagan Ward is an entrepreneur who launched her own branding agency, Creatively Flawless. She recently took a trip to Tbilisi, Georgia, where she represented the U.S. Embassy on a humanitarian campaign. I recently caught up with her to ask her about the experience.

Can you share how you snared such an incredible opportunity, what your role was while there and how you plan to leverage the experience?

Ward: I made the recent trip to Tbilisi, Georgia, to represent the U.S. Embassy for 16 Days of Activism Against Gender-Based Violence in November 2017. A U.S. diplomat reached out to me after researching work I had done as a women’s empowerment activist in my community. The diplomat had read some of my articles centered around a women’s business lounge called Femology that I opened in Detroit last summer. What captured their attention is that Detroit is very much like the country of Georgia, both revitalizing and in rehabilitation, with a blank canvas full of opportunity.

One of the goals on domestic agenda in Georgia is to get more women economically empowered through entrepreneurship. It is a country with more men than women, yet 43% are not active within the workforce. While there, I instructed a series of seminars, workshops, and delivered a keynote speech for the UN Women engaging with CEOs, policymakers, and influential business leaders that focused enterprise, gender equality, and women’s empowerment as a culture.

Tell us about Creatively Flawless, Femology, and how you became an entrepreneur.

Entrepreneurship is about being creative and using the resources you have, so with no money, I used the computer that I had, YouTube and my fashion aesthetic to teach myself how to design and code websites. My first client came after I posted an ad on a job site, which changed the game for me. I realized that I had the power to create my own success—I graduated, worked for just one year, and quit my job after not getting a $3 raise.

Launching Creatively Flawless in 2014, a branding firm for women entrepreneurs, I later dove into full-time entrepreneurship at the start of 2015. This was one the biggest decisions of my life. It was risky, but my business was making just as much as the job I had so it was just as risky as staying at my job after my request for a raise was rejected. Since then, I’ve had designs showcased by major retailers, including Time Square, Vogue, Essence, and other national publications.

[I also launched] Femology to foster collaboration. It’s a spin on co-working with a feminine twist that aligns the needs of modern women in business.

What was the biggest surprise that you encountered while serving in Tbilisi?

I did not expect to be so emotionally connected to the unique experiences of the women I met. One of the most heartfelt moments occurred while I was speaking to women who were displaced by the 2008 war between Russia and Georgia. I saw women in low-income, poverty-stricken settlements much like projects here in America.

Learning about their challenges, including fleeing their homes and essentially starting life all over again, with fewer resources and less access, was both illuminating and evocative. In all, I saw that these women were powerful despite the challenges they have faced. They’ve proven to be victorious and continued to live their lives and rebuild.