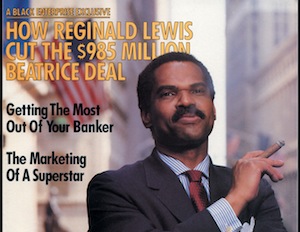 It was a hot summer day on Wall Street, right across the street from the statue of George Washington in front of Federal Hall. That’s when I asked the most important question of my 30-plus-year career as a journalist: “So, Mr. Lewis, what do you plan to do next?”

Reginald F. Lewis, who I’d been assigned to interview for Black Enterprise magazine’s then-annual Deal of the Year cover story, immediately locked on to me with his intense gaze, even as then-Black Enterprise Art Director Jan DeChabert and photographer Jeffrey Scales were positioning and styling him as the subject of our cover shoot for our December 1987 issue. Only days earlier, Lewis had made headlines in both national news and business media when he sold McCall Pattern Co. for $90 million in cash and debt–achieving an astonishing 90-to-1 return on his initial equity investment of $1 million. I was there to try to develop a rapport with him in advance of our interview, set for a few days later.

“What’s next for you?” I repeated nervously, worried that my inquiry had somehow offended him. “I mean, what do you plan to do after this?”

Never dropping his gaze, Lewis appeared to mull over and then quickly reach a decision. “I’ve been interviewed by dozens of journalists from all of the major business publications over the past several days,” he said. “And you are the first one to assume that this McCall deal is not the biggest thing I’d ever do. Not one of the others thought to ask me about what I planned to do next.”

Lewis never shared with me his thoughts on why this was the case, but I’ll tell you what I believe. Had Lewis been white, his success with McCall Pattern would have been expected and viewed as evidence of even greater potential going forward. But because he was a Black man, mainstream business media assumed that he’d already made as big a mark as he was ever likely to make. They assumed that the McCall deal was the pinnacle of his achievement–or rather, over-achievement–not a sign of bigger deals to come. On the other hand, as a young Black man who’d chosen the likes of Paul Robeson as personal role models–and who was also accustomed to being underestimated–it never dawned on me that Lewis could be finished at 44. To my thinking, he was just warming up. The man I knew Lewis to be at that point was too focused, too driven, too–alright, I’ll say it–had too much swagger (think Denzel Washington) to be satisfied with “first-black” honors, 15 minutes of fame and a news clip or two from the Wall Street Journal.

“I have a rule,” Lewis continued, after another brief pause. “Never talk about a deal until it’s done. But I will tell you this: I’m about to do a deal that will be more than ten times the size of this [McCall] deal. That’s all I’m going to say.”

Lewis turned away to face the camera, effectively ending the conversation. But I didn’t need to hear anything more. I immediately excused myself and hustled to the nearest subway station to catch the uptown 4 train to Black Enterprise‘s offices on 5th Avenue, and lobbied then-Managing Editor Derek T. Dingle (now our Editor-in-Chief), who ultimately convinced our Founder and Publisher Earl Graves Sr., to move our story on Lewis up to our November issue and bump the already completed cover profile of top General Motors executive Roy Roberts to the December issue. I couldn’t say what was going to happen, or even when exactly, but I knew it was going to be big, and Lewis had already committed to being interviewed by Black Enterprise, so we were perfectly positioned for breaking news. Even though I was still a new hire at the time, with barely six months on staff, Mr. G and Derek agreed it was worth a shot, and we moved the Roberts cover story to the December issue.

Barely two weeks later, in August of 1987, the ground-breaking deal was announced: Lewis’ company, TLC Group, was buying the international food division of the Beatrice food conglomerate for $985 million dollars, the largest leveraged buyout of off-shore assets in history. I didn’t totally appreciate it at the time, but the story would be a turning point of my fledgling career, transforming a journalist who had occasionally interviewed business people into a true business journalist. Not only did I have an exclusive interview with Lewis locked in before the story broke, he also invited me to sit in on negotiations as he quickly sold off the division’s Australia unit, allowing me to witness his prodigious negotiating prowess for myself. “You’ll be just another Black guy in the room,” he said with his trademark confidence when extending the invitation. “They’ll just think you work for me.”

Shortly after the deal was announced, Lewis, a noted Francophile, was off to Europe, no longer available for face-to-face interviews. Not only did Black Enterprise get the inside track as the story broke, but we had an exclusive on the best images, thanks to the now iconic photography of Scales, including the photo that would later grace the cover of Lewis’ inspirational autobiography, Why Should White Guys Have All The Fun? From the landmark Beatrice International LBO until his untimely death from a brain tumor in 1993, I was privileged to be assigned nearly every Black Enterprise article on Lewis, including a second, in-depth cover interview for our June 1988 issue, when TLC Beatrice was named the BE 100s Industrial/Service Company of the Year. All because I thought to ask what no other journalist did: “What’s next?”

Today, Reginald Lewis is rightly recognized as the iconic inspiration of at least two generations of African American business moguls and top Wall Street executives (not to mention non-African-Americans). Included among them are the likes of BET Founder Robert L. Johnson, real estate magnate Don Peebles, and Lazard Investment Banking Co-Chair Bill Lewis (no relation), as documented by In The Black: A History of African Americans on Wall Street author Gregory S. Bell’s article on the silver anniversary of the TLC/Beatrice deal, which you’ll find in the December 2012 issue of Black Enterprise. Lewis’ legacy speaks for itself, and tonight, I will be among those at a dinner at the Harvard Club, to benefit the Reginald F. Lewis Museum, celebrating the anniversary of the deal that launched a billion-dollar business empire.

I’ve always felt blessed to be able to say that I am also a part of his legacy. Since that hot summer day on Wall Street when Lewis broke his No. 1 rule, I’ve honored my own rule, one that continues to serve me well in business and in life: Never assume that what a person has achieved, no matter how impressive, astonishing or unexpected, is all that they can or will achieve.

Or as Lewis may have put it: Never end a story until it’s done.