In the News: Flint, Michigan 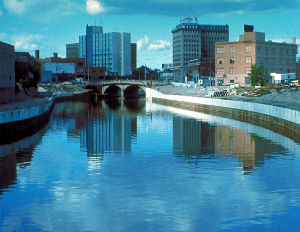 There has been a lot of recent news surrounding the Flint Water Crisis in Detroit, Michigan. Early last year, the Environmental Protection Agency was made aware of the toxic levels of lead that had leaked into the water after Flint made the Flint River its primary source of water due to a financial state of emergency, but they made no effort to make the Michigan Department of Environmental Quality treat the water.

This led to poisoning, sickness, and the possibility of long-term neurological damage in children. African Americans make up a whopping 56.6% of the city’s population. The crisis is now being referred to by many people as both genocide and environmental racism, and several communities and leaders are calling on Governor Rick Snyder to be arrested.

1. Hillary Clinton has made Environmental Racism a Campaign Issue
At the Democratic presidential debate on Jan. 17, Hillary Clinton responded, “the Flint Water Crisis” when asked what issue the candidates felt had been neglected during the debate. The following day, on Martin Luther King. Jr. Day, she continued to voice her anger. At an event in South Carolina, Clinton stated, “We would be outraged if this happened to white kids, and we should be outraged that it’s happening right now to black kids.” While the media have debated whether or not Clinton is trying to capitalize on a political moment or rather to help the community to fight their battle and raise awareness to the issue, her outrage has sparked much-needed attention on Flint.

[Related: 5 Ways You Can Help the Water Crisis in Flint, Michigan]

2. Congressional Black Caucus (CBC) Chairman Urges House Committee on Oversight and Government Reform. Chairman to Have Governor RickÂ SnyderÂ Testify During Upcoming Hearing.
On Jan. 28, CBC Chairman G.K. Butterfield sent a letter to the oversight and government reform chairman, urging him to call upon Michigan’s Governor, Rick Snyder, to testify during the latest court hearing. The letter held, “The harm experienced by the residents of Flint is irreversible and multi-generational. The governor has admitted harm, numerous missteps, and seemingly has a blatant disregard for the care of the citizens of Flint. Governor Snyder has been a central figure in the decision-making process that led to the water crisis and, to that end, should be invited to testify before the Committee.” Earlier in January, the CBC also sent President Obama a letter, asking for a thorough investigation of all entities that had oversight in the Flint water crisis, in addition to urging for immediate funding to assist the city in its recovery.

3. National Society of Black Engineers urges officials to make things right in Flint.
Neville Green, the national chair of the National Society of Black Engineers, holds that cultural responsibility is extremely important, and that the elected officials in Flint, Mich., have failed the community, as well as threatening their safety. Who did this impact the most? Its youth. the NSBE is actively engaging in donations, educating the community on water safety, and coming up with new solutions with engineers. The NSBE is challenging all civil leaders, black organizations, and student movements to join in the support of the movement, removing the dangerous substances and restoring the community’s basic right of access to clean water.