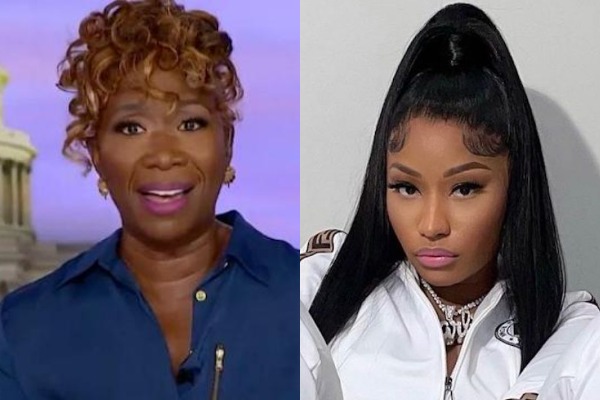 Joy Reid is not backing down from her public vaccine debate with Nicki Minaj. The MSNBC correspondent took to her show to issue one more response regarding their “teachable moment.”

On Tuesday, The Reid Out host took to her nationally syndicated show to respond to the female rapper after Minaj went off on Reid for shaming her initial claims against the vaccine.

“Essentially, she made public her own vaccine deliberation, which according to trusted friends is a better way to describe vaccine hesitancy, which by the way is not the same thing as refusal,” Reid told her viewers in a clip shared by Curtis Houck.

“But by doing, Nicki also used her social media platform and her 22 million Twitter followers to cast doubt on the vaccine to a heavily Black audience. Needless to say, both my comments and her series of infuriated responses went viral.”

#BREAKING: Joy Reid responds to Nicki Minaj's Covid vaccine tweets, saying Black people are not the problem when it comes to vaccines, but rather white conservatives. On Minaj, Reid says it's #Tucker, @mtgreenee, & @RealCandaceO who've taken advantage of her (1/) pic.twitter.com/q1o252Kwso

Reid’s response came after she called out Minaj for becoming a trending topic on Monday after she explained why she was skipping out on attending the Met Gala because it required the vaccine.

“They want you to get vaccinated for the Met. if I get vaccinated it won’t [be] for the Met. It’ll be once I feel I’ve done enough research,” Minaj said. “I’m working on that now. In the meantime my loves, be safe. Wear the mask with 2 strings that grips your head & face. Not that loose one.”

She then followed up and explained her reluctance to get the vaccine after hearing an account about her “cousin’s friend in Trinidad.”

“My cousin in Trinidad won’t get the vaccine cuz his friend got it & became impotent,” Nicki claimed. “His testicles became swollen. His friend was weeks away from getting married, now the girl called off the wedding. So just pray on it & make sure you’re comfortable with ur decision, not bullied.”

My cousin in Trinidad won’t get the vaccine cuz his friend got it & became impotent. His testicles became swollen. His friend was weeks away from getting married, now the girl called off the wedding. So just pray on it & make sure you’re comfortable with ur decision, not bullied

But after Reid blasted her tweets and accused Minaj of encouraging the Black community not to get vaccinated, the “Queen” rapper claimed Reid was “thirsty” to “spread a false narrative against a Black woman,” as noted by Yahoo.

While noting how Black people have good reason to be hesitant about a mandated vaccine, Reid also called out the conspiracy theories that scientists have debunked with facts.

“Everything from just being reluctant or fear of potential side effects all the way up to conspiracy theories about the vaccines that are causing people to refuse to take them or just delay,” Reid said. “And that needs to be addressed. Let’s be clear; there are good solid reasons for Black people to have these doubts.”

Reid made her point, and so did Nicki. It’s also worth noting the “Chung Li” rapper has yet to delete her vaccine tweets.