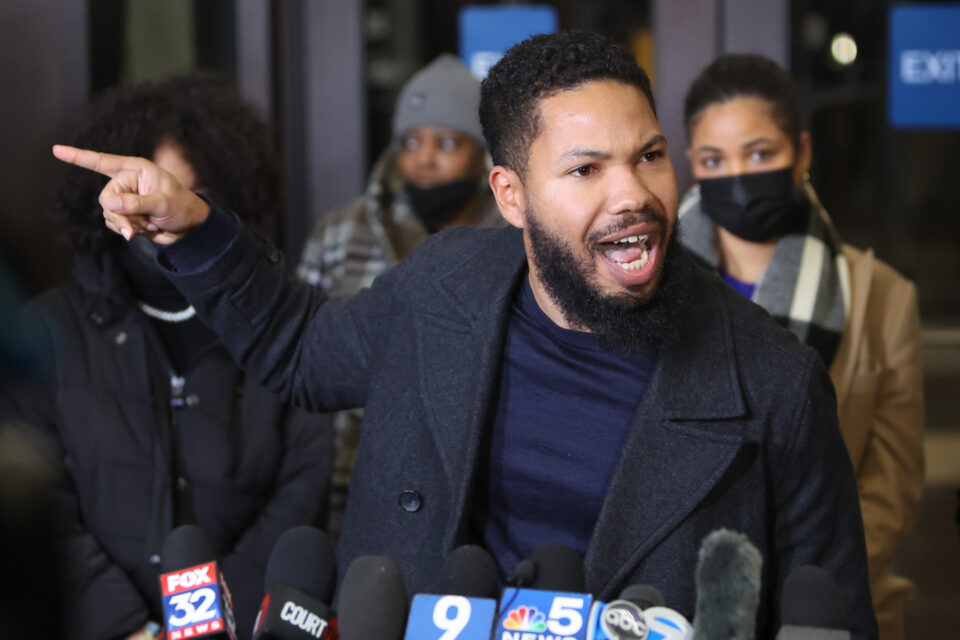 CHICAGO, ILLINOIS - MARCH 10: Jocqui Smollett, the brother of former "Empire" actor Jussie Smollett, speaks to the press at the Leighton Criminal Courts Building after his brother was sentenced to jail on March 10, 2021 in Chicago, Illinois. Jussie Smollett was found guilty late last year of lying to police about a hate crime after he reported to police that two masked men physically attacked him, yelling racist and anti-gay remarks near his Chicago home in 2019. He was sentenced to 150 days in jail, 30 months probation, ordered to pay $120,000 restitution to the city of Chicago and fined $25,000. (Photo by Scott Olson/Getty Images)

In a scene that could have been part of the Empire television series, actor Jussie Smollett blurts out, “I am not suicidal,” after being sentenced to 150 days in jail.

Smollett’s brother, Jocqui, has stated via Instagram that his brother has been placed in a psych ward but denies that he has suicidal ideations.

“So Jussie is currently in a psych ward at Cook County Jail. What’s very concerning is there was a note attached to his paperwork today and put on the front of his jail cell saying that he’s at risk of self-harm,” Jocqui Smollett said in the video clip.

“I just want to make it clear to folks that he is in no way, shape, or form at risk of self-harm. And he wants to let folks know that, that he is very stable, he is very strong, he is very healthy and ready to take on the challenge that ultimately has been put up against him.”

‘Mr. Smollett is being housed in his own cell, which is monitored by security cameras in the cell and by an officer wearing a body-worn camera who is stationed at the entrance of the cell to ensure that Mr. Smollett is under direct observation at all times.”

The statement also clarifies that Smollett is “entitled to have substantial time” out of his cell. He has the ability to use the phone, watch TV as well as interact with staff. No other detainees will be in the common areas when he is there. The protocols the jail has are often used for people who are in protective custody who may “potentially be at risk of harm due to the nature of their charges, their profession, or their noteworthy status.”

Last week, he was sentenced to five months in jail, 30 months of felony probation, and ordered to pay restitution of more than $120,000 and a $25,000 fine for lying on police reports in a hate crime hoax in January 2019.