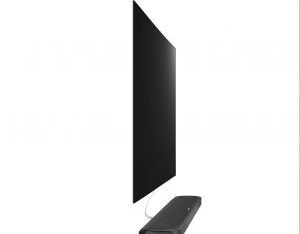 Because the W-series sets are so thin, they can be mounted flush against a wall with no gap between the television and the surface.

The W-series also feature cutting-edge OLED display technology. According to LG, the graphicsĆ‚Ā are able to “reproduce the most lifelike images of any display technology, with perfect blacks, infinite contrast, expanded color gamut, and wider viewing angles.Ć¢ā‚¬Ā¯

“Led by the LG SIGNATURE OLED TV W-series, our TV lineup at CES 2017 demonstrates our commitment to innovation and leadership in OLED and the premium TV market globally,Ć¢ā‚¬Ā¯ said Tim Alessi, head of product marketing at LG Electronics USA. “With Dolby Vision and Dolby Atmos integrated into our newest OLED products, viewers can recapture the magic of the cinema and experience their favorite movies with their original clarity, depth, and imagination intact.Ć¢ā‚¬Ā¯

LG did not announce a ship-to date for the new W-series TVs. However, you can get a sneak peek at several Best Buys across the country including San Francisco, Los Angeles, Las Vegas, Houston, Dallas, Boca Raton, FL, and Paramus, NJ. You can also sign up at BestBuy.com to receive notifications about the new televisions.