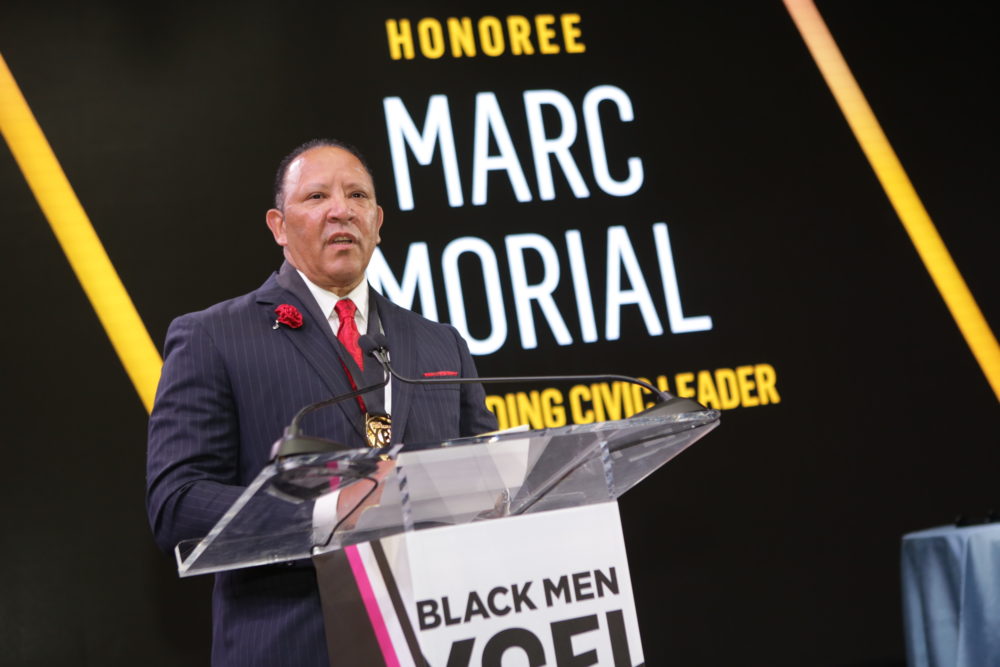 With the dawning of a new decade, Marc Morial, president and CEO of the National Urban League, the largest historic civil rights and urban advocacy organization, is fully aware of the myriad of formidable challenges facing African Americans – and the nation. However, he didn’t expect that America would be on the brink of another war just two days into 2020.

As the recipient of BLACK ENTERPRISE’s Xcel Awards at the 2019 Black Men Xcel Summit for redefining the civil rights for the 21st century, Morial shared his views with BE on that threat and a range of other issues, including the presidential election, voting rights, 2020 Census, entrepreneurship and race relations. A common thread through his responses; Urging African Americans to remain “woke and aware” – and when possible, take action.

The following is the excerpts from the interview:

BE: First, I want to start by gaining your impressions of the escalating tensions between the US and Iran.

People of the United States do not want another war. They do not want to fight these proxy wars over what is going on in the Middle East. And the challenge has been we are now almost 20 years into the Iraq and Afghanistan Wars. Our soldiers have been through two, three, four, five, six, seven, eight tours of duty. And we have spent trillions and trillions of dollars that could have been spent on critical infrastructure, invested in our schools, invested in the eradication of poverty.

Congress is going to have to put up a block on this. The Obama administration had sought a way forward with Iran, with a nuclear deal, which may have been controversial in some quarters but was designed to de-escalate tensions. The Trump administration has not articulated or advanced a strategy with respect to Iran and now has engaged with combative action, which is designed to create retaliatory measures. People need to resist now, and not be mulled and lulled like they were with the Iraq war.

The 2020 CENSUS AND VOTER PARTICIPATION

BE: As we look at other issues, what are NUL’s priorities for 2020?

The National Urban League’s priorities are one, making sure we do everything in our power so that the 2020 Census does not undercut anybody and the black community is fully counted because the ramifications of a low count will affect us for an entire decade.

The second thing we’ve got to do is ensure that everyone is registered, educated, motivated to vote in the fall, and combined with that, aggressively resist African American voter suppression. Whether it comes from state legislature, judicial decisions, Russian interference, we have to vocally and physically resist any voter suppression, and make sure that everyone votes in 2020.

To me, those are the Urban League’s two tasks. We are in discussions with the Congressional Black Caucus and the civil rights community so that those priorities are going to be the black community’s priorities.

BE: In terms of the Census, how do you ensure as many African Americans as possible are counted as well as understand its importance?

The US census Bureau was underfunded by the Trump Administration. We’ve aggressively advocated that Congress add additional money for the Census, and on three occasions, it has done that. [US Senate Minority Leader] Charles Schumer led an effort to ensure that they’d have additional [funding for] marketing and communications. The second thing we have done is continue The Census Black Roundtable with 50 to 60 African American civil rights groups and professional associations. What we’re doing is trying to mobilize everyone to make sure that all of us are talking, messaging and educating people that this census includes online and telephone options to fill out the form in addition to the paper form and door knocking folks are doing.

BE: Is part of the electoral thrust trying to get the Voting Rights Advancement Act passed through the Republican-controlled Senate and signed by the president?

That’s why we have to vote because the Senate may not be inclined to pass the Voting Rights Advancement Act or may pass a watered-down version. We have to educate our community that that’s why we have to vote not only for president but for members of the United States Senate, members of the House, mayors, county commissioners, council members, officeholders across the board. We have got to understand that our power lies in the vote, and when we turned out in large numbers in large numbers in Louisiana and Kentucky [in 2019], it affected the outcomes of those huge elections.

“I WANT TO SEE A BLACK PERSON ON THE TICKET”

BE: Now that the field of Democratic presidential candidates is becoming less diverse, what impact will that development have on your messaging for voter registration and involvement? Is there a push to ensure as we go through the primary process and pick the nominee that you advocate for a diverse ticket? Are such factors important?

All of the above in the short run. Cory Booker remains in the running. And I’m hoping Deval Patrick will go on to do well. However, my personal voter feeling is that I want to see a black person on the ticket if the nominee is a white person. I want to see a black person in the No. 2 position. I don’t express an opinion right now as to who that might be. There are many qualified people who could play that role. The Democratic coalition has to reflect diversity.

BE: So how do you combat voter suppression at the polls?

Our role is going to be to publish a message that people need to resist voter suppression, and then we need to be well-educated about what the Russians did in 2016. They ran their own suppression campaign online talking about the black community, letting trolls pose as Black Lives Matter activists. We’ve got to be really woke and aware.

BE: The Trump Administration has revealed plans to alter the Community Reinvestment Act. How has NUL addressed these proposed changes?

So the Community Reinvestment Act is an economic civil rights law. It mandates that banks make loans and investments [as well as engage in] philanthropy within communities where their depositors are located. The proposed changes seek to de-emphasize mortgage lending to people of color with low and moderate incomes. The changes appear to allow banks to take credit for, for example, things that we understand to be gentrification. In other words, the investment in a luxury apartment complex that’s located in a distressed community reinvestment area.

Those are the concerns that we have. This is a complicated thing. We’re continuing to study it. We’re preparing a formal comment that we will have some time soon. We’ve got to be proactive in it. We’re going to propose advanced criticisms and recommend changes to the Community Reinvestment Act. But, people need to be highly aware that it was one of the tools that advanced, along with the affordable housing goals of Fannie Mae, an increase in black home ownership in the 1960s when it was 40% to the year of 2000 when it was 50%. Now, due to the Great Recession, It’s gone all the way back trending towards 40%. And black home ownership could plunge to the middle 30s.

BE: Shifting to wealth creation through entrepreneurship, how can we significantly grow black-owned businesses in 2020?

The paramount issue for black-owned businesses today is access to capital, and that problem has not been solved. I believe it is an issue for which we need presidential leadership that will make it a priority and use the tools of the federal government to leverage the private sector. I mean there is a lot more risked capital out there interested in supporting African American businesses but the focus is still paltry and low.

I don’t think we have the right mechanism. We need new approaches. I think one approach would be to take [Minority Business Development Agency], elevate it, make its leader an assistant secretary of Commerce and increase its funding. MBDA has been historically underfunded for 20 years.

We cannot solve the racial wealth gap unless we try to build black businesses of scale in the United States. I had an extremely aggressive strategy when I was Mayor in New Orleans related to African American Businesses. I probably created 20 to 25 black millionaires. Some of these folks are still in business today. Several of them took one opportunity in New Orleans and built it into businesses that are doing business all over the country. You need leadership from the top that says black business growth and development is in the best interest of the economy.

BE: From your vantage point, where does the nation stand in terms of race relations today?

I am deeply concerned about the direction of race relations in this country and the rise of white nationalism. That’s the premise as a philosophy and an ideology, and we all have to resist it with our voices. We have to join others because hate crimes are on the rise, racial incidents, religious bigotry is on the rise in this country and it is absolutely unacceptable. When it’s anti-Semitic, anti-LGBT, anti-black anti-immigrant, anti-Muslim, its fruit of the same wicked, poisonous tree. Whether it’s the NYPD or the FBI, they have to treat hate crimes for what they are and not just conduct investigations, but do arrests and prosecutions. When the public sees people taking a perps walk because they’ve been charged with hate crimes, I think that the message is going to be much stronger. So we will continue to work with black, brown, Muslims, Jewish, Latino colleagues. We will continue to stand up. We will continue to speak out.