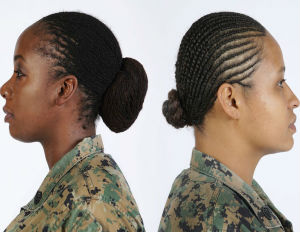 However, the appearance of the twists must be neat and professional looking, and can’t interfere with military headgear. As for locks, they are permitted to be worn with any hair length, but must be separated with square or rectangular-shaped partings, and can’t be wider than 3/8ths of an inch in diameter.

The Marines will be publishing a web page in the next month, illustrating authorized and unauthorized male and female hairstyles, according to a message.