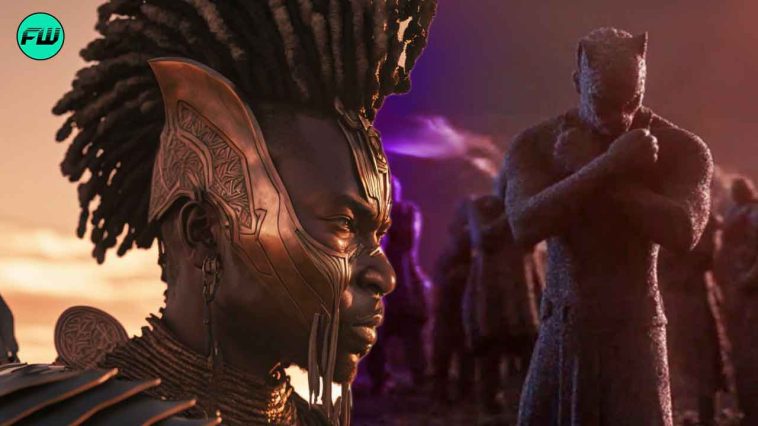 Marvel fans want a series starring Bashenga, the first Black Panther, and they want Ryan Coogler to make it happen.

A talented Black artist named Shaun Harrison illustrated stunning mockups of Bashenga and took to Twitter to push the narrative of Bashenga and he posted pieces of art that he created as concepts exploring the idea.

According to FandomWire, Black Panther teased the narrative of Shaman Bashenga becoming the first Black Panther. However, none of the Marvel movies dive too deep into the history of Wakanda and King Bashenga.

The outlet stated that Bashenga united all the tribes of Wakanda that were once divided.

The warrior had a vision of the goddess Bast and was summoned to the Vabranium-rich soil that produced a powerful herb that he was constructed to consume by the goddess. Partaking of the herb made him superhuman, and the King of Wakanda became the first Black Panther.

After, descendants of the Golden tribe had taken on the Black Panther mantle.

Concepted a New Disney/Marvel release Bashenga: The First Black Panther. And it’s taking off so let me post here… drop below to see more images pic.twitter.com/m613vqw8uo

Harrison followed up with an additional post hinting at characters who would fit as members of the five prevalent tribes back in Bashenga’s times, handing the lead role to British actor John Boyega and adding the character of Phastos to the plot.

"Bashenga” follows Wakanda as 5 tribes of the kingdom fare over control of newly found metal Vibranium. Stars #JohnBoyega as #Bashenga, #BrianTyreeHenry reprising Phastos of the Eternals, #Doechii as Bask, #BurnaBoy as W'Tene leader of the River Tribe and guest apper. by Tems. pic.twitter.com/KkNMAaNhEe

Additionally, the artist provided a list of musical contributions that would appeal to the narrative.

Created in Midjourney, After Effects, and Photoshop pic.twitter.com/eeCtygEsn9

Fans reacted to the Bashenga concept.

“This looks awesome,” one user replied, while another wrote, “WE NEEED THISSSS i want to see baast!”

When one user questioned the purpose of the concept another explained, “It’s been two movies and a bit movies, we know absolutely nothing about Wakanda’s history. A big rock fell a long time ago and now they’re the richest and by far the most advanced country on the planet, with no explanation. Zero world building.”

Marvel Studios and Disney have been tagged a lot demanding the concept to be brought to the big screen following the premiere of Black Panther: Wakanda Forever.

Ryan Coogler, you have 24 hours to respond!