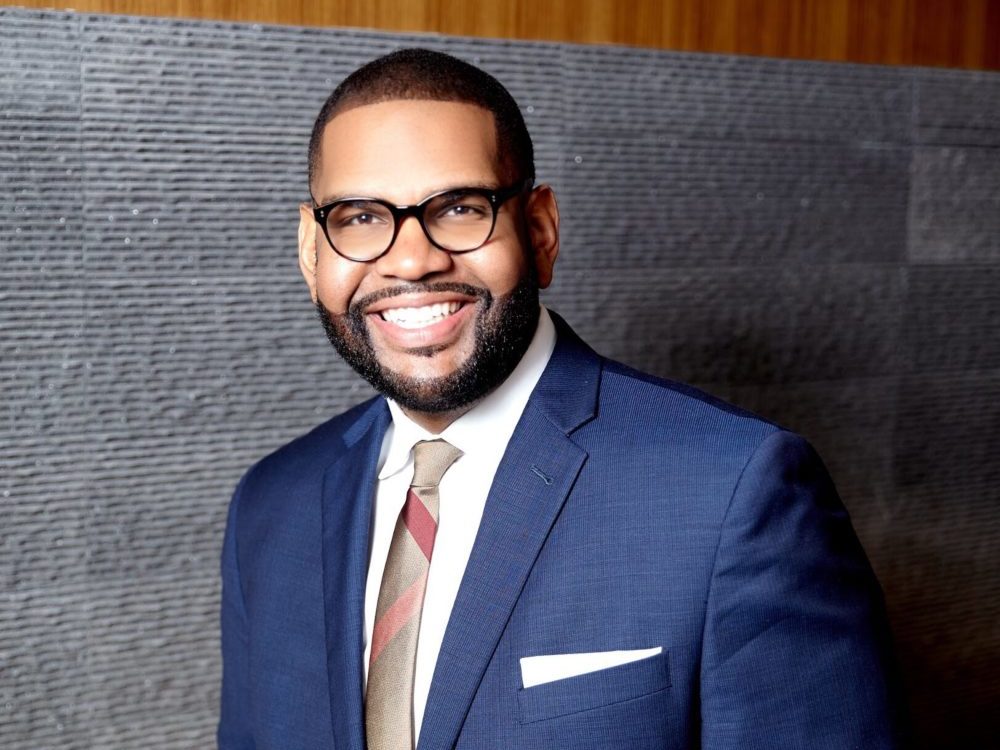 The realm of possibility is oftentimes limited for young black boys living in forgotten communities. Many are too consumed with the everyday struggle of survival to dream of making history—unless, of course, they possess an extraordinary athletic or musical talent. Maurice A. Stinnett, however, beat the odds and made NBA history without a stellar jump shot or layup.

“I grew up in poverty in a little city called Springfield, Ohio, [in] a single-parent home. My mother dropped out of high school and I didn’t know my biological father until two or three years ago,” Stinnett told Black Enterprise. “Typically, for African American boys, sports are a way out and they usually see that as an opportunity to change their lives.” Stinnett, rather, “saw an opportunity to connect education to my passion for sports,” thanks to his mother and grandmother, who exposed him to books about successful people of color. “They were intentional about getting autobiographies of prominent black people. They would explain to me that, with a quality education and strong work ethic, I, too, could be successful like the people I was reading about.”

Stinnett carried those fundamental lessons into adulthood and went on to graduate with a Bachelor of Arts in Business from Central State University before earning a Master of Divinity from Princeton Theological Seminary. He also obtained both a Master of Education and Doctor of Education and Organizational Leadership from Columbia University. Today, the 35-year-old can add “history maker” to his impressive résumé.

Back in July, Stinnett became the first black man to be appointed as vice president of Diversity and Inclusion at an NBA team with BSE Global. The company—which was formerly known as Brooklyn Sports and Entertainment Global—develops and operates state-of-the-art venues and manages premier sports franchises, including the NBA’s Brooklyn Nets, NHL’s New York Islanders, and the Barclays Center. Besides Stinnett, there are just two other positions like this at the NBA team level, both held by African American women: Gail O’Bannon, the vice president of Diversity and Inclusion for the Dallas Mavericks, and Atlanta Hawks Chief Diversity and Inclusion Officer Nzinga Shaw, who became the NBA’s first-ever diversity chief in 2014.

As the inaugural vice president for Diversity, Inclusion and Culture for BSE Global, Stinnett is responsible for creating innovative programming tailored for inclusion and cultural competence. He also provides leadership and support across multiple BSE’s brands. Since stepping into the role, he has established BSE Global’s Diversity, Inclusion and Cultural Engagement (D.I.C.E.) Council At-Large. Its mission is to cultivate a work environment that fosters upward mobility, opportunities for advancement, and an even playing field for all employees. Ultimately, it “will ensure that we have the best practices regarding diversity and inclusion at the forefront of what we’re doing.”

Through the council, he is establishing a variety of business resources groups for African Americans, Hispanics, women, people with disabilities, and other minority workers. Another area of focus for the council is to “create policy that impacts the organization as a whole,” he says. “Policy that speaks to women that are pregnant,” for example, which “supports wives and mothers who aspire to be corporate leaders.” The council will also focus on “creating partnerships with HBCUs to make sure that we have a strong pipeline of diverse talent that is coming into this industry,” he says.

Prior to his appointment at BSE Global, Stinnett served as vice president of Engagement and Chief Diversity Officer at Cleveland State University, where he helped resolve a crisis at the institution that received national attention after an unidentified person(s) posted fliers around campus of a man hanging from a noose with a derogatory slur against LGBTQ people. “This caused a great amount of distress to the student population and the community at large,” he said. The Cleveland State University president then fanned the flames of discord when he seemingly defended the hateful messages as free speech. “Unfortunately, the first response that came out from the president’s office was inadequate. It was not sensitive. It was not well thought out and it caused more harm than it did good,” said Stinnett. “My response was to say ‘we’re sorry for that inadequate response. We’re sorry for not addressing the pain and the hurt of the community and we apologize and we denounce those flyers.’” He also facilitated a meeting between LGBTQ leaders in Cleveland and students to discuss a game plan for moving forward following the incident.

Before joining CSU, Stinnett’s served as dean of Students at Central State University and as the senior director of Community Engagement and Education at CentroNia, a multicultural, bilingual education nonprofit based in Washington, DC. He also worked as the chairman for the World Leadership Program, a White House initiative under the Obama administration that sought to spark learning and dialogue between graduate students and universities in the Middle East and the U.S.

Though most of his professional experience stems from education and the nonprofit sector, Stinnett says his transition into corporate America hasn’t been tough. It revolves around “understanding how to connect diversity and inclusion to the bottom line.” He added, “when you get diversity and inclusion right, you actually increase your profitability.”

Editor’s Note: The headline and text in this article were updated on September 13, 2018, to clarify that Maurice A. Stinnett’s appointment at BSE Globals is at the NBA team level, not the NBA league. In 2015, the NBA appointed Oris Stuart as its first Chief Diversity & Inclusion Officer to oversee the league’s diversity strategies for all NBA properties.