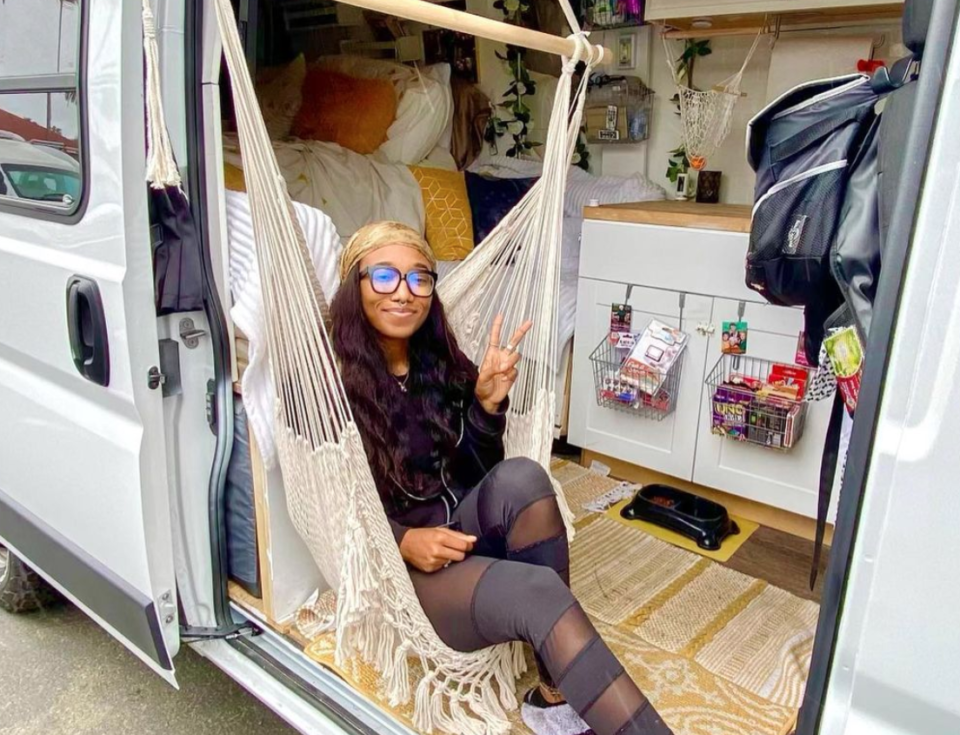 Last December, Jasmine Wilson packed her bags and decided to live the good life as a UX (user-experience) designer in her van.

She got laid off at her first job as a UX Designer and ended up with three six-figure remote jobs at companies located in Austin, Texas. Wilson negotiated a total salary of over $300,000, according to pay stubs and offer letters verified by Business Insider.

Now, the 28-year-old techie is living the van life. She’s on a mission to visit every National Park that’s drivable in her van while she takes her UX design skills to the next level.

“I chose van life because I enjoy traveling and being stuck in one place for too long isn’t what I enjoy,” Wilson tweeted. “There isn’t one way to live life, I do what I want and what works for me, it may not work for you and that’s fine. I would just rather work at a beach than in an office.”

I think this is a good time for an intro.
Hey, I’m Jasmine. I’m a Sr Product Designer and currently working at a few tech companies and I make 6 figures+ at each of them… that’s how my 9-5 makes me $300k+ a year.
How do I live rent free?
I’m a vanlifer, by choice.
Simple. pic.twitter.com/TjKc30H83L

Wilson has always been a creative and tech junkie. After graduating college, she pursued the best of both worlds: UX Design.

With no experience or formal education in UX Design, Wilson relied on YouTube and blogs to learn the ropes. She spent an entire summer watching tutorials to develop her portfolio. By the end of the summer, she landed her first full-time role in UX Design at a company in San Francisco.

“I didn’t have direct experience,” says Wilson during an interview with Black Enterprise. “But I have done 3D modeling, robotics, web design, coding, and marketing. Those are assets. Knowing what sets you apart from other candidates is key. I negotiated my salary because I knew my value.”

Wilson interviewed for at least 10 positions and noted how strenuous the process could be.

“One job can consist of six separate interviews, panel, and a design challenge. You have panels where you have to present your portfolio. You may even have to critique apps for an existing company. I was intentional about the interviews I decided to participate in.”

Wilson wasn’t intimidated by the interviews because she was clear about the strengths she brought to the table. She earned two degrees from Arizona State University — one in digital-culture arts and one in graphic information technology. Throughout college, she worked as an AppleCare At-Home Advisor. Wilson helped people fix their computers and phones without ever seeing their devices. She turned this experience into multiple six-figure job opportunities.

“My experiences helped me to go into interviews ‘human centered’. That’s important in UX Design. You have to understand people and have soft skills. This helped me explain my processes and decisions during the interview process.”

Within a year of landing her first position, she was able to land more positions in UX Design.

“I couldn’t decide between two companies so I decided to test both,” Wilson shared. “It worked because the companies provided a good work-life balance. Each job has set meetings every week. If there is a one on one meeting, I suggest a time. All my calendars are all in one place so it’s easy for me to see when I’m free. I work for startups and mid-size companies and you’re not required to be in meetings all day.”

Living the Van Life As a UX Designer

Becoming a UX Designer has given Wilson the flexibility and freedom to live life on her terms.

After the world was unexpectedly hit with a global pandemic, Wilson knew it was time to make her dreams a reality. She set out to do everything she’s always wanted to do — including launching an app and traveling across the country in a van.

Wilson’s story is inspiring an entire generation of individuals to ‘just do it’. Even her work colleagues are impressed by her travels, asking every meeting where she is located so they can partake in her adventures. Wilson doesn’t know how long she will be living the van life but there’s one thing she does know for sure: she’s living in her truth and walking in her purpose right now.

“You never know what’s going to happen next,” says Wilson. “You should do all the things you want to do now. That’s how I’m living life. I had an app before that no one ever knew about because I was too scared to drop it. This year, I launched the app and I’m doing the van life. I just decided to go for it. There’s no telling how much time we have. You have to discover your truth and live it regardless of what anyone thinks about it.”

FacebookTwitterYoutube
← Simone Biles Withdraws From Floor Competition at Tokyo Olympics As She Battles “The Twisties” ← Game Changers: 8 Black Apps and Developers You Should Know #NationalBlackBusinessMonth
×