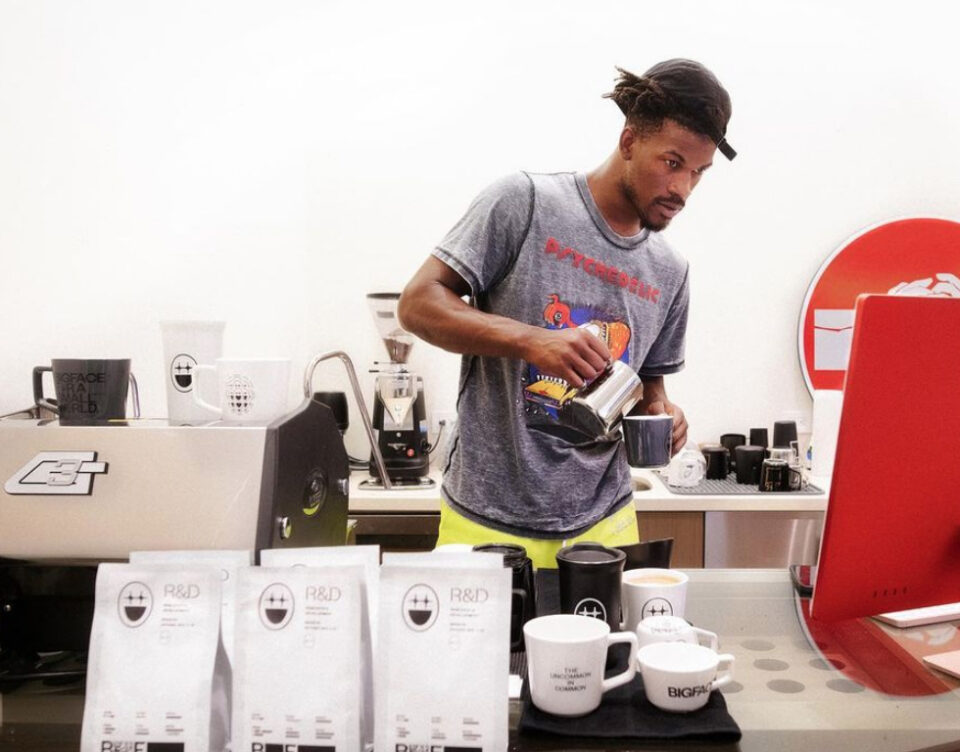 Jimmy Butler (Instagram)
Not impressed with the coffee choices at hand as the National Basketball Association (NBA) headed into the bubble in Orlando, Florida, in 2020, Jimmy Butler devised his own “Big Face Coffee.”

But what jokingly began as offering overpriced cups of coffee for $20 has led the Miami Heat star to launch a coffee brand of his own in a business worth $465.9 billion in 2020,  the Global Coffee Market reports.

After the season, Butler got serious by filing trademarks for Big Face and formally started his coffee company, CNBC reported. He announced on Oct. 1 that he joined the creator program of e-commerce giant Shopify to boost his Big Face coffee brand. The program reportedly enables entrepreneurial athletes to keep all profits by not withholding fees or equity stakes.

“I wake up in the morning excited to train and go work out,” Butler told CNBC. “Then I want to hurry up and get home so I can practice my bartending,” he said, talking about making coffee drinks. His initial plans call for selling branded products in Shopify like coffee mugs and NFTs. Later, he plans to sell the beans.

Butler explained he traveled to coffee farms, including in Costa Rica, to study the business. He said his discussions with farmers were “special,” He wants to use Big Face to “tell the story behind the beans and the farmers and their families. The time, the effort, the energy put into a cup of coffee.”

The epiphany came when the NBA star went to Orlando to save its season last year. Butler saw a void at the secluded Disney campus because he didn’t consider the coffee options to be good. He used his espresso machine and coffee beans from El Salvador to sell coffee for $20 per cup.

Butler discovered that coffee-lovers confined to the campus were willing to buy a superior coffee. Plus, it allowed him to capture a dominant share of the roughly $2,000 per diem provided to players. He sold options, including the so-called “red-eye,” which is coffee merged with a shot of espresso, and macchiatos, cappuccinos, and lattes. Big Face also won bids for coffee beans in the Cup of Excellence auction last August. The purchase totaled over $65,000 for over 1,000 pounds of premium El Salvador coffee.

Butler said the bubble business experience provided a challenge away from basketball. “It’s just the competitor in me,” he stated.

Partnering with Butler allows Shopify to blend a well-known figure into its e-commerce platform and use Butler’s name, image, and likeness for promotions.

Yet, making money with his new coffee is not Butler’s main motivation. He has reportedly made over $144 million in his NBA career, said: “It’s not about that for me. I think basketball has been a great source of income for me and my family.” He added he’s in the business just to make and talk over coffee.