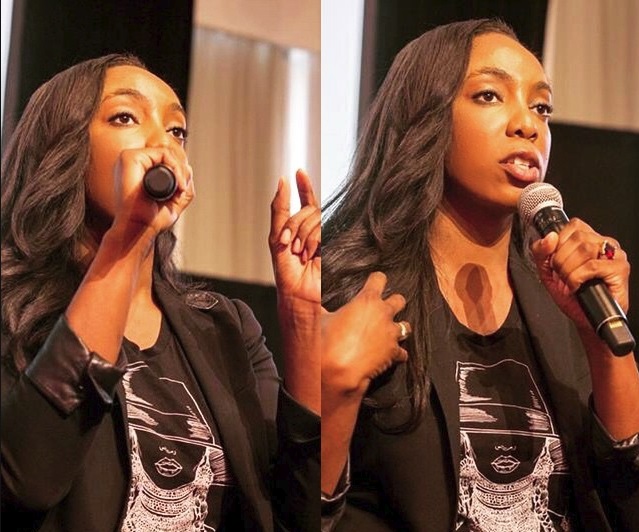 Since the age of 19, innovator and entrepreneur Jessica O. Mathews has been on a path of disruption. That was when she created the SOCCKET, a portable generator in the form of a soccer ball. As you play with it, the ball stores and generates electricity which can then power up an attachable reading lamp or cellphone. At the age of 22, she became the co-founder and CEO of Uncharted Play Inc., where she currently drives the creative vision of an award-winning social enterprise with a mission to disarm social ills by inspiring people to lead playful lives. Under her leadership, Uncharted Play’s other innovation is THE PULSE, an energy harnessing jump rope.

These days Mathews is on a mission to disrupt Harlem. In fact she plans on opening up a tech lab in the New York City neighborhood. “Disruption is never quite. Disruption is never calm. Disruption is never polite,” Mathews recently told a crowd at the Harlem Business Alliance’s Disrupt Harlem one-day business innovation summit.  She advised all burgeoning innovators and entrepreneurs to disrupt something in their respective fields. “Not just think about it. But to actually change entirely the way people think about this thing, entirely the way people think something should be,” she said. Her company’s SOCCKET ball is democratizing energy around the world and as she believes, it will be the future of sustainable energy access.

Mathews is no stranger to BLACK ENTERPRISE. In 2013, she received BE’s Innovator of the Year Award for using SOCCKET to bring power to rural, off-grid areas of Africa, Latin America, and the United States. The company was founded in 2011, but over the last year and a half it has really started to take off. Last year, Uncharted Play distributed more than 50,000 SOCCKETs around the world and has placed its products in the hands of over a quarter million people.

The 27-year-old Harvard M.B.A. alum also teamed up with Toyota to introduce Uncharted Play’s “Think Out of Bounds” curriculum. With SOCCKET at the centerpiece of the curriculum taught to local school children in Brazil, youth are learning how to invent with limited resources; how to do build prototypes. “We are training an army of young disruptors,” said Mathews, who is the daughter of Nigerian parents and saw the need for a sustainable renewable power source while visiting family and friends in the African country. It was dangerous whenever the power went out because people would use kerosene lamps, Mathews explained. “They were used to it and didn’t see it as a deadly situation. No one thought of an innovation to solve this problem.” That is until Mathews discovered a way to combine people’s passion for playing soccer with a mechanism that harnesses kinetic energy as a power source. “Light is life,” that is the motto. “Kinetic energy is energy in motion. Kinetic energy is all around it. Literally every time you move there is energy there,” added Mathews. 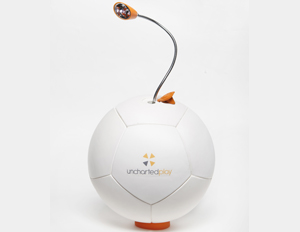 Ultimately, Uncharted Play is designing products for a global community and is continuously looking to introduce impactful products while the company continues to grow, pivot and scale. In the works are three items: one is a modular piece that can be integrated into the supply chain of any model like the wheels on a baby carriage. The second is foam or cushion that can go into piece of furniture like a bed or a sofa, so that when you are sitting up and down you are creating energy. The third is wearable tech–taking conductive fibers and interlacing them with magnetic fibers to make real clothing, putting them in areas where there is touch like between one’s legs, so while you are walking you are creating energy, which means you could charge a smartphone in your pants pocket.

All of this may be five or more years in the making, but Uncharted Play’s current play and sports products are the proof of concept that introduces the idea of harnessing energy from the motion all around us. Its proprietary technology, M.O.R.E. (motion-based, off-grid renewable energy), comes in four different energy-harvesting methods and can be inserted into almost anything in motion â€‹to provide renewable, sustainable power. Right now, this power can be used for small appliances and smart devices. Mathews’ envisions a world entirely powered through motion in the near future.

“This is disruptive, because one of the things that really affect the way people live their live is energy access. We are constantly on the move. We are constantly on the go. We constantly hunger for power.” As Mathews sees it, “a world in motion should be powered by motion, and when you combine Uncharted Play’s technology with wireless transmission and new super-batteries, charging will be constant and sustainable, making the idea of a dead cellphone a thing of the past.”