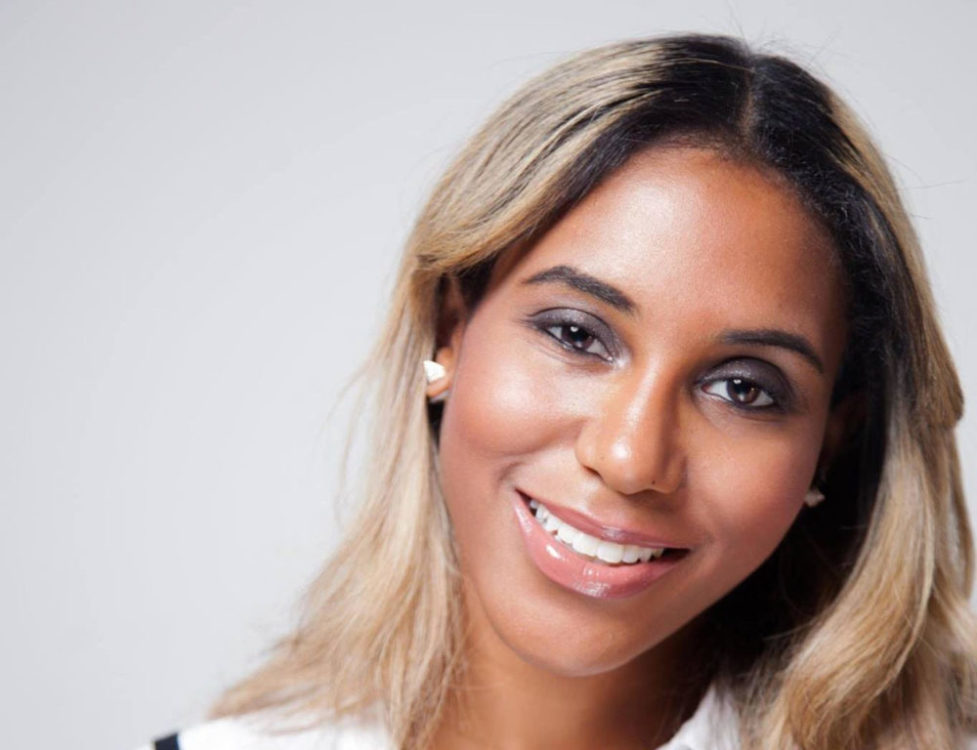 Alana Blaylock, a northern New Jersey native, has been turning many heads in the entertainment industry lately; and with great reason. At just 29 years-old, she has made a name for herself as a successful journalist, documentarian, writer, and entrepreneur. Having had the pleasure of working with NBA mega-star Lebron James, among others in the docuseries Best Shot, Blaylock has now added Emmy Award Winner to her ever-growing list of accomplishments.

It is safe to say she has earned her seat at the table. When asked what that means for her she replied:

“I found a path that I felt passionate about pursuing and strove to become distinguished in my field. Along the way, through various career experiences, I put the pieces together to build the table.”

BLACK ENTERPRISE was pleased to learn Blaylock, not only has a seat at the table, she is trying to make space for others as well.

“I would like to see more documentaries about black women made. I’ve produced docuseries on black males and it would be great to have the opportunity to shine a light on the African American female experience.” She went on to advise that she’d love to executive produce a documentary that she creates herself in the future. “I’d also love to be in a position where I can give more women and people of color opportunities behind the scenes. Until then, I’m taking it day by day and continuing to build out my platform and expand my reach.”

Blaylock wears many hats. As one would expect, it varies daily. The demands of her day are constantly changing.

“I’ll wake up at 7a.m., read the news and eat a quality breakfast. If I’m on a shoot, I’ll head to set and perform my responsibilities for the day which could involve prepping talent, performing interviews, directing my cinematographer, and making sure logistics are going according to plan. If I’m editing a project, I’ll be sitting in meetings with the production team weaving a storyline together. When I’m developing a series, I’m usually on calls with my collaborators coming up with ideas.”

Alana Blaylock is certainly a busy lady, but also understands the importance of downtime.

“If time allows for it, in the evening I’ll make my way to a meditative workout and meet up with a friend for dinner.” While touching on her battle with anxiety she shared, “I struggle with anxiety and have found ways to calm myself. Exercising, meditating, being surrounded by friends, and having a regular sleep pattern are essential for keeping calm. Practicing positive self-talk and keeping a positive mindset are key as well.”

She notes there is frequent rejection in the entertainment industry and some years are better than others due to the unpredictability of the business.

“I’ve been frustrated and have wanted to throw in the towel when going through a rough patch, but I’ve been around long enough to know that tough times don’t last,” she reflects. “It’s in our darkest moments that we find revelation. Knowing that, I don’t sweat when things don’t go my way because I know that there’s something meant to be waiting for me on the other side.”

On Working With Lebron

Blaylock first saw the job opportunity for the Best Shot docuseries online and sent her resume to the hiring manager. They liked her credits (which include content for networks like CNN, HBO, NBC News, National Geographic, Amazon, and YouTube Red) and gave her a call. The rest, as they say, is history.

Lebron James is known for his moves on the court, but according to Blaylock, he’s also a great teammate off the court.

“Lebron James is an incredible man who I’m proud to call my executive producer. The projects he signs onto showcase the African American experience in a brilliant way and show the nuances in our identities. It felt outstanding to work on a series of his of that magnitude.” Blaylock said.

But it’s not just James Blaylock enjoys working with. She looks for the good all around her and gains something from everyone she encounters on projects. She stated that many of the participants she meets on her series positively affect her and that each project holds a very special place in her heart.

Let’s Talk About That Emmy!

Blaylock was “happily surprised” when she won her Emmy:

“When you are making a television show, you set out to do a good job and to create content that will benefit the audience. Winning an award is something you dream of, but often times don’t know how achievable it is. When I won my Emmy, I felt very proud of my team and myself. We put a lot of hard work into that series and to be recognized for that felt wonderful.”

She keeps the Emmy right where she can see it daily as a reminder to herself to dig deep as she has no limits.

How She Got to Where She Is Today

Alana Blaylock has tenacity. There were no shortcuts to her success — her persistence and consistent great work has gotten her to where she is today.

“In the entertainment industry, nothing can replace dedication and drive.” Blaylock stated when she first started it was all about proving her worth. So much so she didn’t share her age initially; to prevent distraction from her work.

“Early on in my career, I was private about my age because I knew people wouldn’t take me as seriously when I was fresh out of college. When people called me “a baby” or “the attractive one” because of my age, it diminished the quality of my work and their perception of my abilities. I’ve had to keep my head held high and not take those individuals too seriously, and ultimately move forward with confidence.”

She believes her ability to adapt in different environments while remaining authentic has allowed her to stand out and succeed in her career over time.

“I think it’s important to be able to relate to your participants while staying true to self. Being able to navigate a situation is paramount and I’ve honed that skill over the years.” said Blaylock

While she didn’t break into the industry through networking, it certainly plays a role for her today.

“I enjoy when I have the opportunity to work with like-minded individuals, so I find that networking is essential. When I can contribute to a project that I’ve developed with other millennials, that makes me feel proud.”

When asked if she had any tips on networking for introverts, Blaylock suggested taking an improv class as it can help take participants out of their shells.