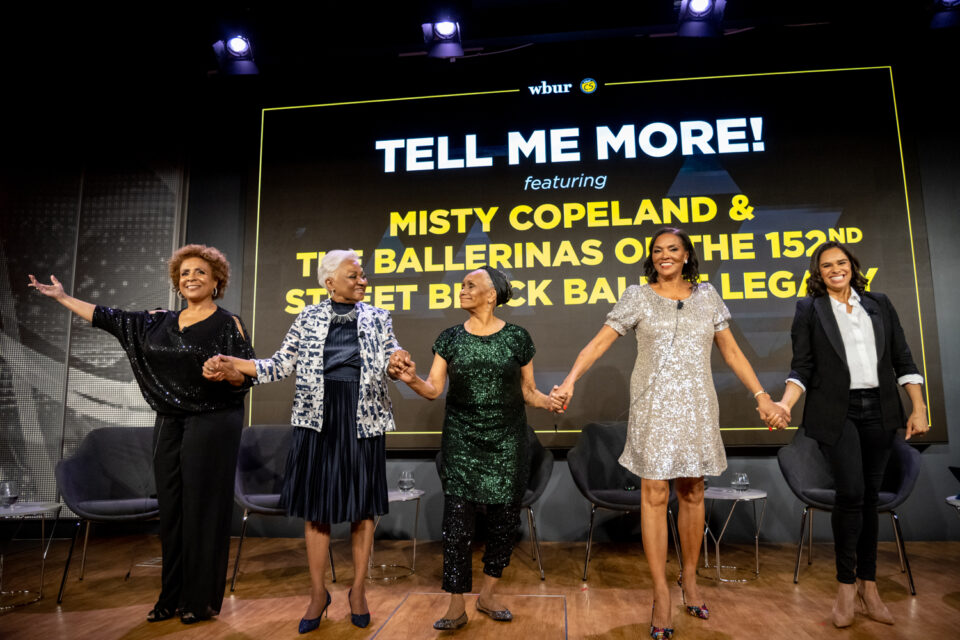 (Left to right) Karlya Shelton-Benjamin, Gayle McKinney-Griffith, Sheila Rohan, and Lydia Abarca-Mitchell of the 152nd Street Black Ballet Legacy, and Misty Copeland, the first Black principal dancer of the American Ballet Theatre, prepare to take a bow on WBUR’s CitySpace stage in Boston. This was the first time the ballerinas had met as part WBUR’s Tell Me More! event series. (Photo Courtesy: lizlinder.com)

WBUR CitySpace at The Lavine Broadcast Center presented Misty Copeland, the first Black female principal dancer with the prestigious American Ballet Theatre and author of “Black Ballerinas: My Journey to Our Legacy” in a conversation with trailblazing Black ballerinas and founding members of the Dance Theatre of Harlem, now of the 152nd Street Black Ballet Legacy, on December 1.

Throughout her career, Copeland paved the way for many dancers as she broke barriers and overcame the realities of racism in dance. In her recent book, “Black Ballerinas,” she aims to retell the history of Black ballet dancers and spotlight the foundational legacy of those who came before her.

In this iteration of “Tell Me More!,” Copeland joined — for the first time ever — four pioneering Black ballerinas, Lydia Abarca-Mitchell, Sheila Rohan, Gayle McKinney-Griffith and Karlya Shelton-Benjamin, who made history domestically and internationally in the 60s and 70s as part of the Dance Theatre of Harlem.

“It is wonderful to give these women their due and celebrate their legacy and all they have done for Black ballet dancers who have come after,” said Amy Macdonald, director of WBUR CitySpace.

WBUR arts and culture reporter Cristela Guerra moderated the conversation exploring Copeland’s extraordinary journey to becoming a principal dancer at the American Ballet Theatre, while paying homage to the Black ballerinas who made history in their own right. This event celebrates the meeting of two generations of ballerinas and the legacy created by women of color in the art of ballet. They discussed roadblocks for Black dancers both past and present and share their respective journeys to prominence, while honoring those who helped performers of color achieve greatness unburdened by ignorance.

“I am honored and excited to meet the incredible women of the 152nd Street Black Ballet Legacy. To be able to sit down with Lydia Abarca-Mitchell, Sheila Rohan, Gayle McKinney-Griffith and Karlya Shelton-Benjamin is exactly why this book is so special to me,” Copeland said. “I want to be a part of making sure that the contributions of Black women in ballet are recognized, celebrated and most importantly, remembered for the historical record.”

Despite the obstacles in their way, Abarca-Mitchell, Rohan, McKinney-Griffith and Shelton-Benjamin made history as world-renowned dancers while overcoming the prejudices of their classical art. The women’s efforts to reclaim their role in dance history was chronicled recently by The New York Times.

Abarca-Mitchell, the first Black Prima ballerina of a major company and of Dance Theatre of Harlem, was the first ballerina of color to grace the cover of Dance Magazine. She was the beacon of hope and a true changemaker that transformed the scope and possibility of what a ballerina could and should look like for the masses and for people of color. All four legacy dancers performed for royalty, including Her Majesty Queen Elizabeth The Queen Mother, U.S. Presidents, and had as devoted fans major celebrities, notably Mick Jagger, Michael Jackson, Sidney Poitier, Cicely Tyson, Lena Horne, and Leontyne Price.

“I look forward to joining Misty Copeland in conversation about our shared experiences as trailblazing dancers of color. Meeting with Misty highlights and magnifies the work of all Dance Theatre of Harlem’s founding members. I am excited to share our respective journeys, while embracing and supporting Misty moving forward. I know our ancestors are rejoicing!,” said Abarca-Mitchell, the first Black Prima ballerina.

The event was presented as part of WBUR CitySpace’s “Tell Me More!” series, which pairs fascinating leaders in their respective fields for conversations about their journeys, inspirations and life lessons.

Lydia Abarca-Mitchell went from Harlem projects, to banking to ballet superstar, mesmerizing the ballet world, audiences and critics, while defying the odds of those who thought a Black ballerina just could not rival her white counterparts. She paved the way for other ballet dancers of color while creating a reality that a Black ballerina can reach Prima status.

Sheila Rohan, soon to be 80, comes from artistic royalty as the sister of the founder of the Nanette Bearden Contemporary Dance Theatre, where she was ballet mistress and soloist, and sister- in- law of famed artist, Romare Bearden. Sheila worked with Gordon Parks, and taught classes for Alvin Ailey School of Dance and master classes in Japan. She currently serves on various boards in the artistic world, including the Romare Bearden Foundation.

Gayle McKinney-Griffith, left the prestigious Juilliard School, in order to join the Dance Theatre of Harlem where she became its first ballet mistress. She then worked with choreographer Louis Johnson on many projects including the movie “The Wiz,” and performed extensively in film and television. McKinney-Griffith taught ballet in Germany where she also served as co-founder of an independent company based in Berlin. Currently residing in Connecticut, McKinney-Griffith serves on the ballet faculty of the Dance Extension and as a guest ballet teacher at Connecticut College.

Karlya Shelton-Benjamin, the first Black ballerina for the Colorado Concert Ballet, now Colorado Ballet, was the first Black dancer to represent the U.S. in the prestigious Prix de Lausanne competition and performances at the White House for President Ronald Reagan and First Lady Nancy Reagan. She continues to coach esteemed young formidable dancers of color today. It was Shelton-Benjamin’s pen pal relationship decades ago with Lisa Nkonoki (then age 12) that resulted in Nkonoki now serving as manager helping to reimagine their groundbreaking historical contributions and dance careers through appearances, endorsements and a  speaking tour.

These women, along with Marcia Sells, (Chief Diversity Officer, Metropolitan Opera) came together in May 2020 to form the 152nd Street Black Ballet Legacy, an independent organization that collectively and accurately seeks to preserve, educate, and inspire, giving voice to the essence of Black ballet, and aspiring dancers of color.