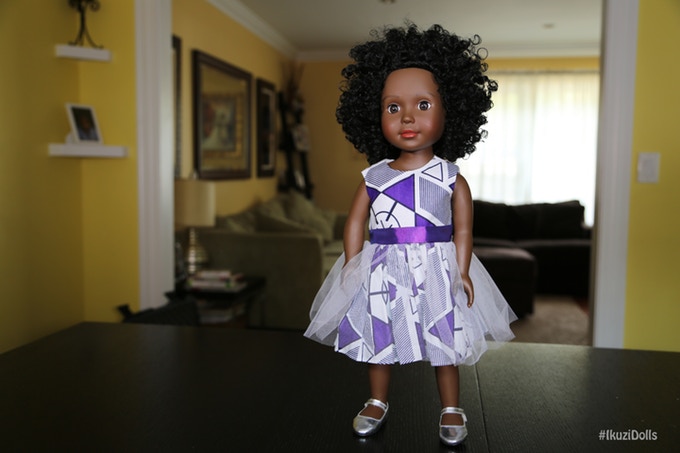 Ozi Okaro started Ikuzi Dolls in the early days of 2015. The e-commerce business, she said, was to fill a gap for girls of color who didn’t have access to dolls that look like them. Her online-based business, Ikuzi Dolls, is a line of dolls that is sensitive to diversity and the many different ways a little girl can look, Okaro said.

In the fall of that year, she launched an online crowdfunding campaign to raise money for the production of inventory.

It failed spectacularly. The online campaign, which ran for about four weeks, only yielded $6,000 of the intended $36,000.

“I was going in a little blind,” Okaro told ROI-NJ. “Afterwards, I realized you have to build up a following and really get people rooting for you. I didn’t have that yet.”

A few weeks later, she would turn to family and friends for support. Okaro said she raised $25,000 in a matter of three weeks with a bulk of the cash coming from her own family savings.

“It’s funny how people come together for you when they believe in you,” Okaro told Black Enterprise.

Her big break, however, would come in the spring of 2017 when O Magazine came calling. The publication had been searching online for dolls featuring girls of color and had stumbled upon her website.

“I got an email from an editor from O Magazine through the website,” Okaro said. “She said she was doing a piece on race and they were looking for girls of color and thought they were beautiful.”

“We started seeing an increase in orders,” she said. “Nobody knew about us before the feature and that put a spotlight on us.”

Although Black Enterprise can not independently verify Ikuzi Dolls’ numbers, Okaro said revenues have doubled every year since she launched.

“Getting out there like this is allowing me to grow with what little financing I’ve been able to put into it,” she said. “I only really started this about two and a half years ago, so I’ve been blessed to have that exposure this early in the game.”

Okaro’s journey to launching an e-commerce business was one of a coincidence of sorts. She earned a degree in Computer Science and Statistics from the University of Toronto and worked in the tech industry for years as a systems analyst coding and building websites. Having worked in the industry for a while, Okaro decided to transition from tech by enrolling at Columbia Business School where she earned a degree in Marketing Management. She took jobs at Giorgio Armani, then Victoria’s Secret, before returning to her roots and accepting a position at Toys ‘R’ Us as manager of global e-commerce.

She would then take five years off to raise her kids. It was during this period that Okaro said the idea of the business came to her.

“It was more than a little frustrating; we could only ever find dolls with one shade of brown,” she said. “One of my daughters has dark brown skin and the other has light brown skin. I couldn’t find dolls for each of them individually.”

The word “Ikuzi” means “to teach” in Igbo, a language spoken by an ethnic group in Nigeria. Okaro said all of her dolls come dressed in an African print dress.

“It’s deliberate, because we want black children to celebrate and be proud of their African culture and heritage,” Okaro said.

Although the startup is still in its early stages, Okaro is optimistic that a new wave of social consciousness will drive growth to her business.

“There’s an increasing awareness of the need to celebrate ourselves—embracing natural hair, our skin tone and more,” she said. “That’s hopefully something we can ride as a business. But, on a social level, it’s so important for little black boys and girls to be proud of who they are, not ashamed of it.”