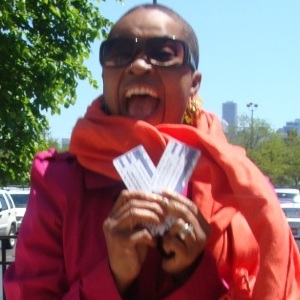 A room filled with 14,000 ultimate fans and A-list celebrities felt intimate, personal, hypnotic, and authentically ordained. Fans traveled far and near to be a part of the magical day: The final taping of Oprah Winfrey‘s talk show in Chicago on Tuesday. From Belgium, South Dakota, Seattle, New Jersey, Baltimore, Atlanta and Italy–folks hugged, gasped and cheered like family celebrating history. I was one of those lucky people, having scored a pair of coveted tickets just weeks before.

The moment Oprah Winfrey announced her farewell season, I immediately wrote in my journal: “Must attend the taping.” I entered the lottery on Oprah.com and thought nothing more of it–until I was notified via email just days later telling me that I scored 6th row-center seats for the final taping at Chicago’s United Center. This was truly one of my wildest dreams fulfilled!

The farewell taping was a two-hour tribute to Oprah peppered with love from celebrities, mentors, mentees and everyday people, and with the underlying theme of God’s anointing and appointing Oprah to greatness.

Brand Oprah was moved with emotion, especially when close friend Tyler Perry took the stage and said, “With God on Oprah, she was destined for greatness.â€ The tone of the show became somewhat of a revival, a homage to whence we came. Aretha Franklin followed with a stirring performance of “Amazing Grace,â€ leaving not a dry eye in the room. The Queen of Soul got the spirit, and told Oprah to “continue to keep God first.” Aretha started dancing and the audience and celebrities started jamming–all that was missing was the collection plate.

It was at that moment Oprah said, “I am done, can’t take no more.â€ But that wasn’t it, Usher came out and ended the phenomenal taping with “O Happy Days,â€ and the stadium was filled with jubilation, love, grace and completion.

For many, the Oprah Winfrey Show is where we witnessed the evolution of a Black woman who became a mega-brand; she battled with weight, family drama, racism and friendship, and still, she gave so purely and inspired us all to be better and want more for our own lives.

Although, there were no cars, makeovers or uber giveaways at the farewell taping, the audience received the greatest gift–a chance to be a part of history up-close and personal with the most powerful woman on earth.

Thank you, Oprah Winfrey, for 25 years of pure inspiration and aspiration. Looking forward to your next chapter on OWN.