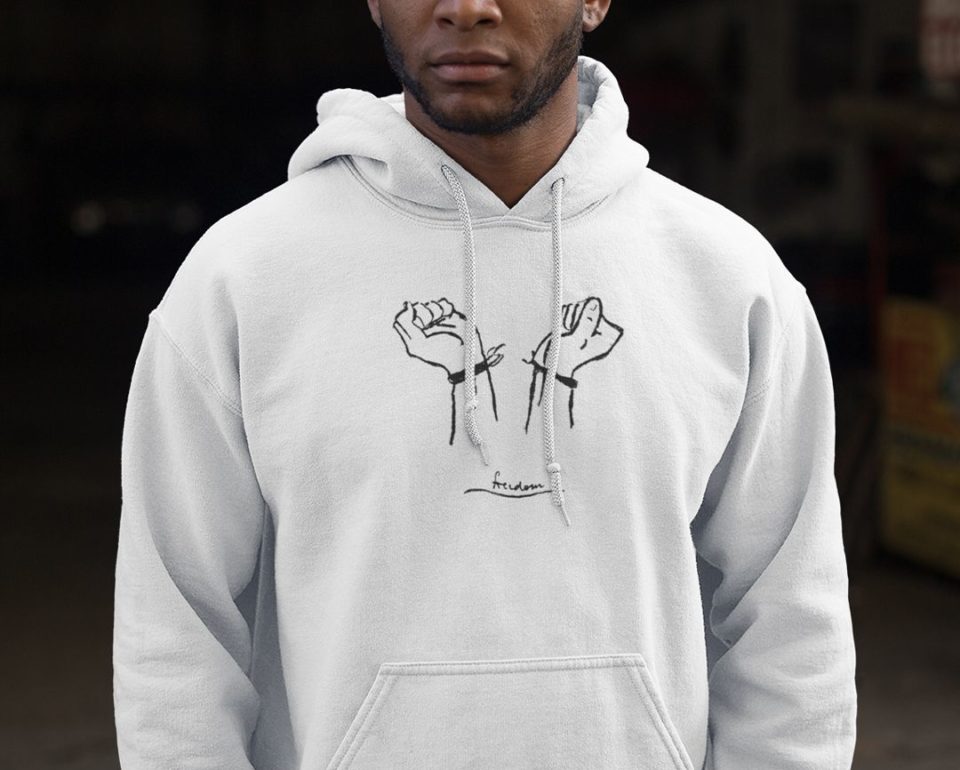 The House of Mandela’s ‘Freedom’ Collection, which honors the light, legacy, and fight of South African anti-apartheid revolutionary statesman and philanthropist, Nelson Mandela, drops ahead of Mandela Day, July 18.

In partnership with Represent.com, the collection will include interpretations “of two original, charcoal drawings from Madiba’s Struggle Series, including ‘Struggle’ and ‘Freedom’,” according to a press release. Mandela sketched a series of five humble images in 2001 that shed light on the intricate and difficult chapters of his storied life. Once completed, Mandela wrote:

“These sketches are not so much about my life as they are about my own country. I drew hands because they are powerful instruments, hands can hurt or heal, punish or uplift. They can also be bound, but a quest for righteousness can never be repressed. In time, we broke open the shackles of injustice, we joined hands across social divides and national boundaries, between continents and over oceans. And now we look to the future, knowing that even if age makes us wiser guides, it is the youth that remind us of love, of trust, and the value of life.” Nelson Mandela 2001.

The apparel collection represents “the constant battle to be strong and stay true to oneself in the face of adversity,” which was “a theme as relevant today as it was during Mr. Mandela’s own fight for justice,” according to the announcement.

Additionally, each design is inclusive of a print of Mandela’s signature.

The apparel line includes pendants, t-shirts, hoodies, and jackets. It will serve to bring “awareness about social and racial injustices” which is a goal set forth for the collection.

“Over the years we’ve had the pleasure of working with some of the biggest and brightest in the world of entertainment, and it’s an incredible honor to work alongside the Mandela family on an ongoing project that brings to life the original artwork of such an inspiring, and prolific figure,” Represent’s COO Dan Rosenberg said.

The apparel launch precedes Mandela Day, which takes place annually on July 18. Per the Mandela Day website, “the essence of” it is to “take action, inspire change, and make every day a Mandela Day.”

The spirit of Mandela Day offers a call of action for individuals to be active citizens within their prospective communities.

Although South Africa’s first Black president and anti-apartheid activist, Nelson Mandela, passed away in 2013, The House of Mandela is an initiative that is intended to keep the principles that he stood for alive. According to the website, it is “an African family dedicated to the preservation of African history, culture and family.” Maintaining South African’s legacy through Nelson Mandela’s memory is underway through The House of Mandela and a “new apparel partnership with Represent,” per a press release.

As the world reflects on Nelson Mandela’s legacy, we give thanks for his life, his leadership and his devotion to connecting humanity to humanitarian causes.
Learn more on what you can for #MandelaDay next Sunday, July 18th: https://t.co/v9McEz8nvZ pic.twitter.com/pJDYaGfGk8

Click here to view The House of Mandela ‘Freedom’ Collection.