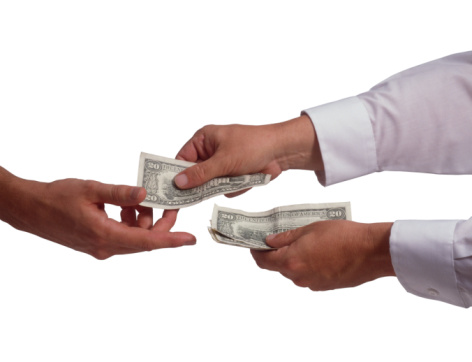 One of the challenges facing many people–especially those considered to be better off than their family and/or peers in terms of education, income or employment–is the misplaced need to always say yes when people ask for financial help or favors. If this is you, you lend money to friends and relatives even though you know they won’t pay you back. You are the one who always pays for the movie tickets, picks up the tab at dinner, pays for gas, etc., because it’s assumed that you “have it like that.”

Many relatively successful people suffer from a kind of survivors guilt, Â which makes us feel obligated to give, pay and lend even when we can’t afford it. We literally give until it hurts, and then give some more. And unfortunately, such people are usually surrounded by family and friends, including parents and children, all too willing to take advantage.

One of the most important mental adjustments we must make as we begin to change our relationship with money and take responsibility for our financial health is to learn to just say no to chronic takers. Not “No, and…” or “No, but….” or “Maybe.” Just “No.” If you want to explain yourself, do it out of love, not obligation.

There is nothing wrong with helping friends and relatives during tough times, commensurate with the abundance you’ve been blessed with. However, you should give willingly, not out of obligation. And it is absolutely wrong for people to use your hard-earned resources as their emergency fund, or to treat you as a living ATM. Allowing them to do so leads to you putting your own financial stability at risk, often with no one to turn to in your time of need.

Never lend money that you cannot afford to give away. Even then, never lend without getting the borrower to sign a written agreement to repay the loan. This policy alone will reduce the number of loan requests you’ll have to deal with, especially if you make it clear that you won’t lend additional money until and unless outstanding loans are repaid, and that you’ll sue for your money if you have to.

Never co-sign on a loan, a car note, or other financial obligation, especially if you can’t afford to make the payments if the person you are co-signing for could later decide that they can’t or won’t. That goes double if that person is a family member, triple if the person is a romantic interest. Love has nothing to do with it. How many television judge shows do you have to watch before you realize that this is a recipe for disaster?

Never be pressured into spending out of guilt or to prove your love. Anyone who would make such demands, including children, parents, siblings, or romantic interests, does not care as much about you (at least not in that moment) as they do about what you can do for them. If money is what it takes to buy their love, you’ll never have enough.

There’s a difference between helping someone and carrying them. In fact, your constant help may be causing them to become even more weak and dependent, which is bad for them and you. Resist chronic takers who would exploit your generosity. Never let the G in your giving stand for guilt. As a wise person once lovingly told me: You can lean on me. But you can’t lay on me.

FacebookTwitterYoutube
← Just Hush Up: 5 Good Reasons It’s Best to Keep Personal Opinions to Yourself in the Workplace ← The Many Business Ventures of Shaquille O’Neal
×