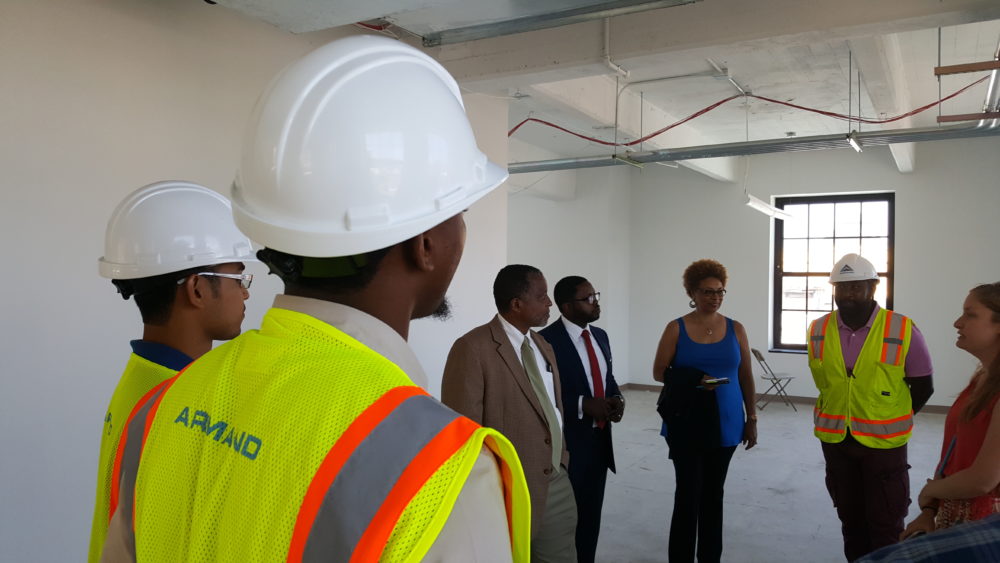 Phillip J. Thompson the Deputy Mayor for Strategic Policy Initiatives and Jonnel Doris, Senior Advisor and Director of the NYC Mayor’s Office of M/WBEs on site with NYC M/WBE Barbara Armand, CEO and founder of Armand Corporation, renovating a section of the South Brooklyn Marine Army Terminal in Brooklyn.

Simultaneously, the city expanded its first loan program in February 2018 to allow eligible M/WBEs to now apply for low-interest loans at 3% up to $1 million, an increase from $500,000 when the program was launched in March 2017.

Jonnel Doris, senior adviser and director of the New York City Mayor’s Office of Minority and Women-Owned Business Enterprise (M/WBE) spoke about the city doubling the size of the loan program and how M/WBEs, like all businesses, need working capital to thrive.

“M/WBEs have challenges in the marketplace getting loans, so we instituted this program in getting the resources they need to compete successfully for city contracts,” he says.

The loan program is available to firms that are certified M/WBEs or in the process of M/WBE certification, as well as small entrepreneurs who are competing for city contracts that can’t get financing from conventional sources.  Another contributing factor for the gain is a state law passed in 2017, allowing M/WBEs to be awarded contracts up to $150,000 without having to go through a lengthy competitive bidding process to provide the city goods and services.

The city has certified 7,000 businesses in its M/WBE program with a goal certifying 9,000 by the end of this year. Black businesses provide the city with a broad range of services in four industries that consists of goods, construction, professional, and standard services. The standard services category includes janitorial/maintenance as well as automobiles and automotive equipment.

Mayor de Blasio’s office reported in October 2018 the city has awarded over $10 billion to minority and women-owned business enterprises since 2015, hitting the milestone this year. The spending means the nation’s largest city is ahead of schedule of reaching its goal of awarding $20 billion to those firms by 2025.

“To become the fairest big city in America, we need to take steps that allow everyone – regardless of race, gender or ethnicity – to participate in our economy,” Mayor Bill de Blasio announced at the time. “While this is a clear sign of progress, we still have a lot of work to do to continue creating a fairer and more inclusive city.”

The city’s top-performing agencies for awarding M/WBE contracts since 2015 have been the Department of Design and Construction with over $1 billion; Department of Parks and Recreation at $455 million; and Department of Information Technology and Telecommunications at $449 million.

But the city’s contracting activities have not been a cake walk. Mayor de Blasio has taken some bold actions after critics maintained the city was not doing enough to award contracts and boost spending with M/WBE businesses.

Critics bashed de Blasio’s administration for setting unpretentious goals for contracting with those firms. Mayor de Blasio pledged to allot $16 billion in minority contracting over a decade when he took office in 2014.

In October 2018, New York Controller Scott Stringer gave the city a D+ for the fourth straight year on his annual report card grading the government for its contracting work with women and minority-owned businesses, the New York Daily News reported.

Out of a $19.3 billion contracting budget in the fiscal year 2018, just $1 billion was spent in contracts to MWBEs, Stringer’s office said. And while the city has boosted its spending with the firms, more than 80% of the city’s MWBEs are not receiving any business from the city.

Doris from the NYC Mayor’s Office of M/WBEs responded.  “We disagree with the Comptroller’s report on the basis that it is inaccurate as it seems to include common sense exemptions like sole source contacts and contracts won by nonprofits which are not businesses and are controlled by boards. That said M/WBE advocates are doing great work in pushing for improvements to the program. In fact, many of them joined us in advocacy to the state legislature that led to the new higher discretionary award amount for NYC M/WBEs.”