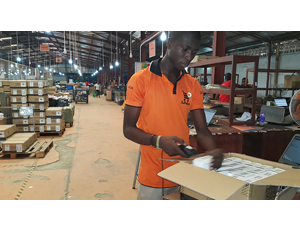 [Related: Join Black Women “Getting in Formationâ€ to Advance Nutrition and Agriculture for International Women’s Day]

With a valuation of over $1 billion, AIG is Africa’s first ‘tech unicorn.’ AIG is the parent company of e-commerce platform Jumia that includes over 71 companies in over 8 different verticals, including food delivery, retail, real estate and travel.

AIG is backed by Rocket Internet, a German-based Internet company. With this backing, AIG has been able to provide many goods and services to Africans in even the most remote regions. In addition, the AIG platform has created a lush environment for creating and nurturing African entrepreneurs.

An example of one such entrepreneur, is Bankole Cardoso, the founder of Easy Taxi, Nigeria. Easy Taxi is a rival of Uber’s and is the world’s most downloaded taxi app, with more than 20 million users in 420 cities across 30 countries.

Jumia said it intends to use the funds to support its continued growth, and to execute on attractive development opportunities in Africa, along with AIG’s other e-commerce platforms, reports the Premium Times.

AIG investors see the African continent as a prime area for e-commerce growth. From TechCrunch:

Unlike some of Rocket Internet’s vertical plays, Jumia covers fashion, electronics and more. The idea is to put a tent pole down in Africa’s emerging online commerce early on, and then reap the rewards as increased Internet access and growing middle classes increase demand for e-commerce. That’s the same blueprint Rocket Internet companies employ in Latin America, Asia and other places, but Africa is a more extreme testbed.

Jules Frebault, of the special situations group at Goldman Sachs, London, said in a statement, “We are impressed by AIG’s pan-African operations and execution capabilities, and believe the combination of strategic partners and management’s demonstrated expertise uniquely position the company’s ecosystem to play a leading role in the development of Africa’s online economy.â€

African technology innovation has been capturing a lot of attention, as of late. VC4Africa, a startup funding platform, reported last year that invested capital for African startups doubled since last year to $26.9 million. The average amount of investment also increased, from $130,000 to more than $200,000 in the last year.

The organization cited three key factors for the growing interest in African tech investment: an increased interest from members of the African diaspora to invest in startups in countries of their origin; the increase in angel investors; and a widespread appetite for cross-border investing in Africa.

The continent also holds 15% of the world’s population–a sizable consumer base that any business (and its investors) would covet.