Why I Have No Interest In Watching Mad Men, Pan Am or The Playboy Club 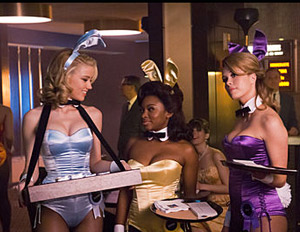 When I was a kid, I refused to watch Happy Days. I was 13 years old when the television comedy, focused on White teenaged friends and their families in 1950s Milwaukee, first aired on ABC. By the time the hit show went off the air in 1984, I was 24. During that time, I never watched a complete episode of the show, nor have I watched it since–not even reruns in syndication. Why watch a show that not only has nothing to do with my world, but has in fact rendered me invisible?

My problem with the series started with the title, and its “America in the good old days” premise. I found it disturbing. It even made me a little angry. Even at 13, I knew that what constituted happy days for many White Americans were anything but for me and mine, and Black America in general. Even today, it bothers me that my mother loved the show (and it’s spinoffs, Laverne & Shirley and Joanie & Chachi) and watched it religiously, which is why I ever saw any of it at all. (Ironically, I’ve come to respect and even admire several of the actors on these shows, especially Henry Winkler and Ron Howard, forever immortalized as Arthur “Fonzie” Fonzarelli and Richie Cunningham, respectively.)

As I transitioned from teenager to young man, becoming a journalist and student activist at Rutgers University in New Brunswick, N.J., along the way, I became even more aware and repelled by how Happy Days pretended that the overt racial violence and Jim Crow discrimination that was alive and well in the 1950s either never happened or just wasn’t important. Of course, the cast was all White virtually through its entire decade-long run. In fact, the only Black actor to play a role of any significance at all on the show was Jack Baker, who played Bill “Sticks” Downy, a brother the Fonz hires to play drums in Richie’s band. Ironically, that piece of trivia was barely noticed in the 1970s, as Black actors were rarely hired as regular cast members on “White” shows regardless of the period they were set in.

Fast forward to 2011. It’s been just a few weeks since FOX aired the 63rd Primetime Emmy Awards, a celebration so bereft of African Americans that it could easily be transported to the 1950s America of Happy Days and no one would even blink. (Okay, gay female host Jane Lynch may have given them a clue that something was amiss.) I mean, both Paul Robeson and Marion Anderson would have refused to perform at that worldwide broadcast of the television industry’s colossal failure at achieving the diversity and racial equality that Dr. Martin Luther King Jr. fought and died for decades ago. (Or did he? If it didn’t happen on Happy Days, did it really happen?)

I hope I’ve given you some idea why I was never compelled to watch the critically acclaimed Mad Men, despite the fact that it is a four-time winner of the Emmy Award for Outstanding Drama Series and that many of my friends (yes, most of whom are Black) absolutely love the show, which focuses on a fictional 1960s ad agency. It’s also why I have zero interest, at least so far, in the new shows Pan Am, ABC’s series about flight attendants in the 1960s, or NBC’s The Playboy Club, set in 1963. The good old days of Mad Men, Pan Am and The Playboy Club all send a familiar message to Black actors: no positions available. But leave your resume, just in case some token roles open up.