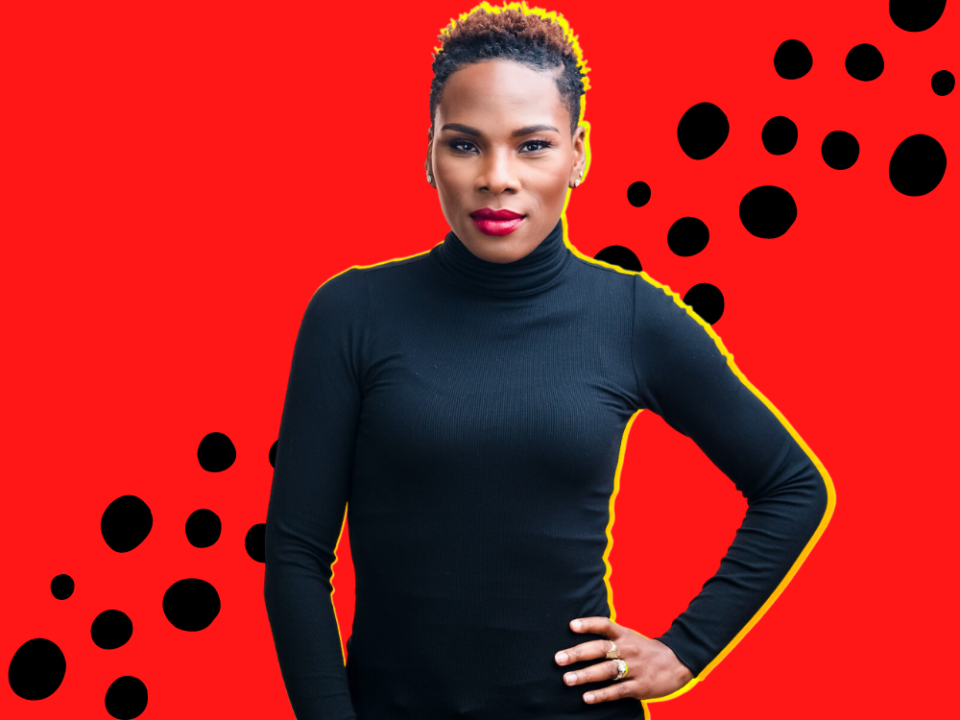 If laughter while getting your learn on with witty Black culture references is your vibe, Luvvie Ajayi Jones is your vibe-dealer and author. Her first book I’m Judging You: The Do-Better Manual became a New York Times best-seller for a reason. The Nigerian-born author has a unique gift with words, giving us Beyoncé-level performances on a page. Whenever you read her work, you’re hit with Rihanna-level savagery mixed with Maya Angelou-level wisdom. In other words, you’re bound to get read while you read, and enjoy every single second of it. This week Ajayi Jones has dropped her second book, Professional Troublemaker: The Fear-fighter Manual and it is her best work to-date.

Professional Troublemaker has even had Queen Issa Rae’s stamp of approval. Rae said, “As an oft-scared chickenhead, who cares too much about what others think, it’s so comforting to be guided through my own crippling fear and self-doubt by one of the bravest, most incisively honest, hysterical voices I know. This book was so real, relatable and so much of it had me belly laughing. This is the essential manual for anybody who is ready to take that leap of faith to bet on the best, uninhibited, whole version of themselves.”

Start Somewhere and Own That Thing You Do

Ajayi Jones moved to Chicago from Nigeria at the age of 9 and has been blogging since college. “I was in college and I never stopped. I basically fell in love with writing outside of the classroom and then my blog just kept getting more and more eyes on it.”

While she has been writing for 18 years, for the longest time, she didn’t consider herself a writer. Once she stepped into that powerful title, she stepped out of her own way, and the opportunity floodgates opened.

The author considers herself “an accidental success” sharing, “There was no strategy in the beginning … it was me ultimately doing what felt real. It was me doing what felt authentic and compelling. And I just kept on doing it. I finally ran out of excuses to not call myself a writer. I ran out of reasons to say ‘Hey, this title feels too big’ and for me it was the moment the Lord was waiting for, the universe was waiting for. All the things I was afraid of, God moved out the way once I actually said I am a writer.”

The Professional Troublemaker author says imposter syndrome is to blame. “I think imposter syndrome is real and we will let it convince us that we’re not worth a title, an opportunity, or a raise and it will stop us from owning our gifts.” Since Ajayi Jones stopped doubting herself and began owning her gifts she has won awards, been recognized by Oprah, has given a TED Talk which has more than 5 million views and even received the latest Ivy Park gift box—in other words, she is unstoppable. 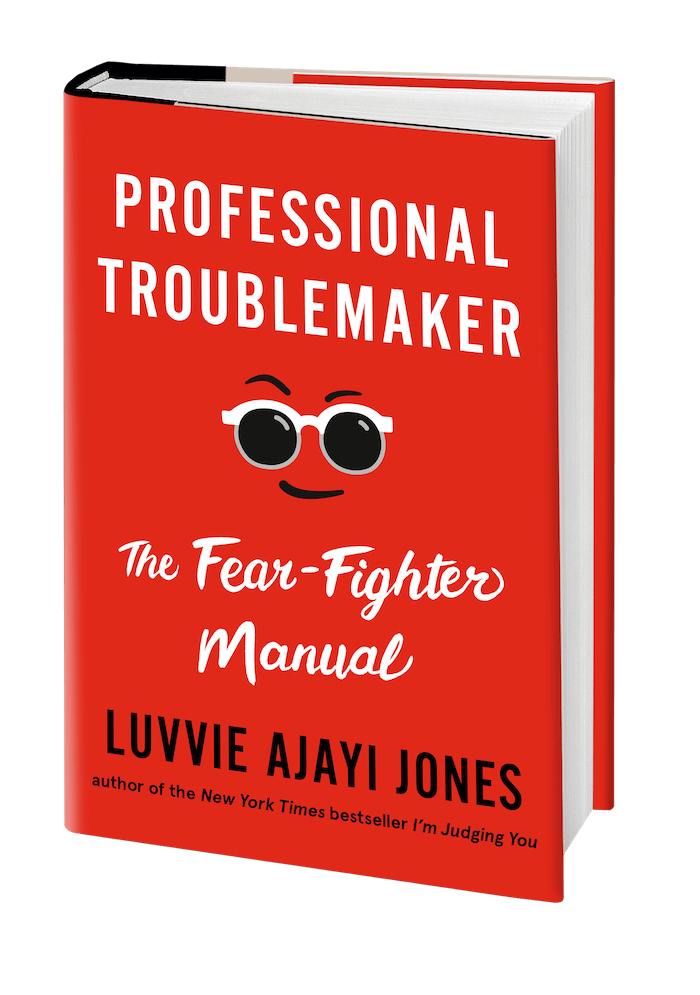 Ajayi Jones says that we all deal with fear. A “professional troublemaker,” however, doesn’t allow that fear to talk them out of making the moves they need to make or saying the things they need to say to create real change. She realized that in the moments she does the things that scare her, she wins and in the moments that she has shied away out of fear, she doesn’t grow.

Ajayi Jones isn’t just talking the talk though—she has waked the walk, over and over again, doing things that scare her for the greater good. Her now famous TED Talk almost didn’t happen. She declined the opportunity twice out of fear. “I was afraid that I wasn’t ready,” she recalled. Had they not asked her to do it a third time and she not had a powerful conversation with a friend who did not let her say no, she believes she would’ve turned it down again.

The title of the TED Talk you ask? The title was “Get Comfortable Being Uncomfortable.” And that one move she made while scared has transformed so many lives. “That talk has had such a deep impact on people. I’ve gotten thousands of messages over the years about that talk from people who said what it made them do and how much it gave them courage in moments when they really needed it.” This got her thinking about how often we “say no to yes opportunities because of fear.” That is a habit Ajayi Jones is hoping to break with her new book Professional Troublemaker.

Fear impacts us all. “Fear is such a universal problem and the problem is that we end up tying a lot of shame to it. We end up feeling bad because we’re afraid and I’m like, don’t feel bad because you’re afraid. That part is the natural part … but when we are afraid, we should not stop there. We need to move forward anyway.”  Ajayi Jones believes that when we opt out of doing things because we’re fearful of the worst-case scenarios, we end up opting out of the best-case scenarios.

The New York Times best-selling author wants to make it clear that some fear keeps us safe, “like the fear that prevents us from putting our hands in fire,” but the fear evoked by imposter syndrome is different and what we need to move through to become our greatest selves. She shared, “I’ve seen how my life has really transformed in the moments I’m petrified but something is pushing me toward this thing … [I think] ‘you know what, I might as well just do it’ and I’ll do it afraid.”

“I think to be fearless is to commit to not doing less because of your fear.”

The lesson here is that fear isn’t the problem. You allowing it to stop you from doing the things you want to do can be, though, and that’s why you need this fear-fighter manual.

Who Needs This Book?

No, but seriously, we’ve all dealt with fear and can benefit from having a guide to conquering it gracefully. If you’re looking to finally be able to ditch imposter syndrome and move through fear, you need to grab Ajayi Jones’ new book Professional Troublemaker: The Fear-fighter Manual. She takes you by the hand affirming your feels while making you feel unstoppable with every page, giving practical advice and laugh-out-loud stories to keep you wanting more.

“[Being fearless] doesn’t mean you’re not afraid … we’re supposed to move in this world afraid. The difference is that when we let the fear be the first factor in the decisions that we make, we won’t do anything outside of our comfort zone. We won’t do anything that’s actually audacious. We’re not going to do the things we’re supposed to do that’ll bring us results we want and then we’ll find ourselves stuck. I just want people to understand, you’re going to be scared and that’s cool.”

Her goals for this book alone are a reason to grab. “My goal is that somebody reads this book and is transformed by it. I really want this book to help somebody else live a really big audacious life. My real mission is to get a million people to read this book and do something new, different, bigger because of it.”

Her editor, after reading the book decided to ask for a raise and not only did she get the raise, she got promoted. It’s time to get your own glow up.

Grab Professional Troublemaker at your local bookstores or on Amazon. You can keep up with Ajayi Jones’ virtual book tour and musings on Instagram @Luvvie