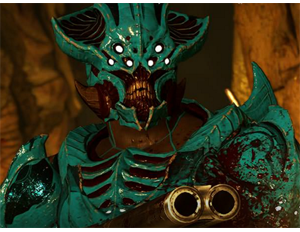 Like many Generation-Xers, one of my fondest and earliest memories of PC-video gaming was playing DOOM.

It was nothing similar to what many of us who were weaned off of Atari or Intellivision consoles were used to. The game play was first person shooter and there were levels, cheats, and a “Godâ€ mode which made an awesome game.

DOOM was released way back in 1993 by id Software. There were several updated versions and variations that followed (such as Wolfenstein and Quake).

A couple of weekends ago, the beta opened to test. I tried the beta hanging on to past glories of slaying demons, finding character-enhancing potions, and finishing the game without resorting to cheats.

Excited to test, I played on a PC on the Steam platform.

Here are my thoughts on the beta:

– If you are expecting old DOOM, you will be disappointed. It’s more like a futuristic, in-hell Call of Duty. There are still elements of the DOOM of yesteryear, including demons, power-ups, and big guns.

– I found the graphics a little too dark and not sharp. However, it’s in beta and I don’t have a great video card.

– Shooting was a little slow.

– It was tricky to play with a mouse and keyboard; the experience is probably best with a controller.

– There are lots of great weaponry.

-There are customizations and modules (but I didn’t try them).

– You were only able to play when the online servers are up, the timetable for that was not clear. Sometimes the game would load, and other times it wouldn’t.

– Seems like a lot of adults were playing (probably wistful Gen-Xers like me). There were not much of the immature hijinks as on other multiplayer games.

I wanted to try it on Xbox before the beta closed (it was available on PS4, as well) but I didn’t get the chance.

Although the beta was not reminiscent of the DOOM of my younger years, I still pre-ordered the game. As per PC Games N.Â Doom will be available on SteamÂ or through Bethesda’sÂ list of retailers. There will be standard and collector’s editions. Both get: