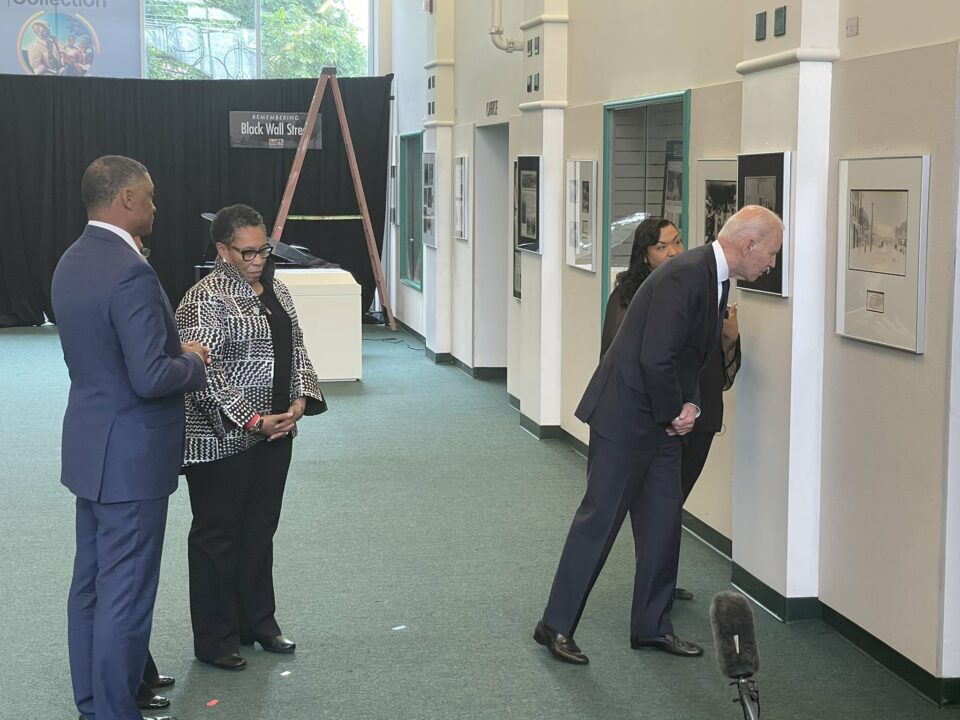 President Joe Biden looks at a photograph of Black Wall Street while taking a tour of an exhibit about the Tulsa Race Massacre at the Greenwood Cultural Center. (Image: Twitter)

President Joe Biden marked the 101st anniversary of the Tulsa Race Massacre by commemorating the hundreds of Black men and women killed in one of the country’s worst incidents of racial violence.

“This was not a riot; it was a massacre,” President Biden said in a statement Wednesday. “As many as 300 Black Americans were killed, and nearly 10,000 were left destitute. Homes, businesses, and churches were burned. A generation of Black wealth was extinguished.”

According to the White House, Biden is the first president to visit the site since the 1921incident in which a white mob descended on the town of Greenwood, a thriving Black community nicknamed Black Wall Street, and destroyed its 35 city blocks and killed hundreds of its 10,000 residents.

According to a 2001 report from an Oklahoma commission to study the riot, Greenwood residents filed numerous lawsuits over the matter equaling $1.8 million ($29 million today). The city rejected all but one lawsuit. A white shop owner was compensated for guns taken from his store.

Bloomberg reports two of Greenwood’s wealthiest Black men at the time, O.W. Gurley and J.B Stradford, lost more than $300,000 combined in the riot. The commission estimates the financial toll of the Tulsa Race Massacre is more than $200 million worth of Black property in today’s dollars.

In addition to Biden visiting the site, he also touted two expanded efforts to help communities like Greenwood build wealth—an aggressive effort to combat racial discrimination in housing and a bold commitment to increase the share of federal contracts going to small disadvantaged businesses, including Black- and brown-owned small businesses, by 50% by 2025.

“We cannot bury pain and trauma forever,” Biden said in a statement. “As I said in Tulsa, great nations do not hide from their histories. We are a great nation, and by reckoning with and remedying the injustices of the past, America will become greater still.”