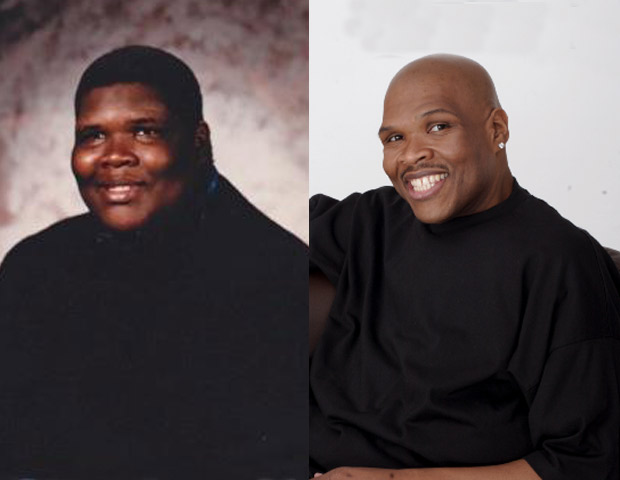 Before and after: Big Boy's weight loss

It wasn’t until world-renowned radio host Kurt “Big Boy” Alexander almost died that he finally understood just how serious his weight problem had actually become. The Los Angeles-based personality and author of the new book An XL Life: Staying Big at Half the Size (Cash Money Content) says his wake-up call came following serious health complications stemming from a Duodenal Switch–an extreme gastric reduction surgery–he’d undergone in September 2010 to shed more than 200 lbs. from his once 500+ lbs. frame.

“I had to fight for my life a couple of times [after the surgery],” admits Big Boy. “I was in the intensive care unit for 10 days. I had to be fed through a feeding tube, have multiple blood transfusions… It was awful. That’s why I tell people that surgery [for weight loss] should always be your last option–if at all.”

Big Boy says while he didn’t turn to weight-loss surgery as a first resort, he now wishes he’d worked harder to take the weight off on his own. Back in 2002 he was able to shed a considerable amount of weight following an on-air challenge by longtime friend and superstar actor Will Smith, who’d offered to donate $1,000 for every pound Big Boy lost to the charity of his choice. “I was able to drop more than 111-pounds through diet and exercise, explains the media titan, who admits the health-conscious path was short-lived. “The first thing I did after I weighed in and got that $111,000 check was ride straight from the radio station to this Mexican restaurant to get some chicken nachos. My mind still wasn’t right about my eating habits.”

The repercussions of Big Boy’s bad eating were immediate–and serious. “I could feel all that new weight in my back,” he says, admitting he gained all 111-pounds back and then some. “My legs started getting numb and the one time I was walking through the Burbank airport and I got short of breath and I had to stop walking. That had never happened to me before. It scared me.”

Despite witnessing other people in his life–including his mom–fall victim to obesity, it wasn’t until his health was at risk that Big Boy finally understood he was literally eating himself into an early grave. “I’ve had a series of ‘aha’ moments about my weight over the years,” he shares. “For starters my mom passed at the age of 57. She had high blood pressure, congestive heart failure, diabetes–all these weight-related issues.

“Plus, friends of mine were passing away who weighed less than me,” Big Boy continues, referring to the late rap star Christopher “Big Pun” Rios, who passed away in 2000–even after dropping 100 pounds. “I remember being on the phone with him, saying ‘Man, we’ve got to get it together.’ After he died, I started to think: Do I have more years behind me than I have in front of me? That’s one hell of a question.”

Fortunately, for Big Boy, the answer was a resounding no. In the past few years the married father of two has committed himself to keeping the weight off–with the help of pick-up basketball games, martial arts, weight loss support groups, mentoring from his doctor and a nutritionist. “I realized through writing this book that food–like in many African-American families–was a source of comfort [for me],â€ he says. “Now I still love food but I know more about nutrition, portion size and exercise, and I’m passing these new food habits on to my kids.”

Big Boy hopes that, following the death of even more famous Black men who have long struggled with weight, including Gerald Levert and more recently rapper Dwight “Heavy D” Myers, his story will also serve as motivation for brothers to take better care of themselves. “We don’t go to the doctor enough,” says Big Boy, who recently shot a TV pilot and signed a development deal with VH1. “There’s no buddy-system around us taking care of our health. Cats will say, ‘Let’s go to the strip club,’ before they’ll say, ‘Let’s sign up to get prostrate exams,’ and even though that sounds crazy, it’s necessary… Not smoking, maintaining a healthy weight,
making sure everything is working right and all of your tests are up to date will save your life.”