RECAP: Beats By Dre Premieres 'The Game Before The Game' - Black Enterprise 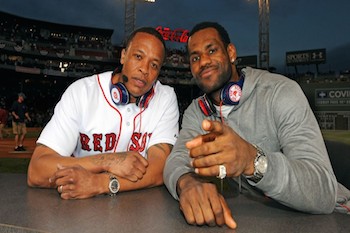 On Wednesday night, I attended an exclusive premiere of Â “The Game Before The Game” at New York City’s famed Bryant Park Hotel.

Starring the world’s most explosive and charismatic footballers, Beats Electronics and Beats by Dre spotlighted the pre-game rituals of these elite players.

I didn’t know what to expect when I first arrived at the place. After attending countless events at the famed locale, movers and shakers were all over the place waiting in anticipation for the latest news from Apple’s newest employees. For those who were too busy reading that Michael Jackson, Inc. book, the “House of Steve Jobs” purchased Beats for a cool $3 billion dollars; Jimmy Iovine quit working as an Interscope employee; and Dr. Dre finally has enough money to put out “Detox.”

The headphone maker and streaming music service had the night jumping with food and drinks. It was easy enough to resist, as my attention was solely focused on what Beats wanted to show us. Could it be those wireless Bluetooth ear buds that I’ve always hoped for? Was it a new headphone colorway collaboration with one of my favorite artists? Only Beats President Luke Wood could answer my burning questions, and he was too busy chatting it up with New York Red Bulls striker (and 2010 World Cup winner) Thierry Daniel Henry.

Finally, the Beats team was ready to show off what we all had been waiting for. EVP of Marketing at Beats by Dre, Omar Johnson, took over duties to inform all in attendance that the company was debuting a new viral feature titled “The Game Before The Game.” Showcasing “the power and emotion of winning,” Beats was promising an experience mired in authenticity.

Directed by music video auteur Nabil Elderkin (Kanye West’s “Welcome to Heartbreak,” Frank Ocean’s “Novacane”), and starring FC Barcelona’s Neymar Da Silva Santos Jr. – Beats played its hand for the upcoming 2014 World Cup. The short is one of several versions that will begin to hit markets all around the world starting Thursday (June 5), and feature the likes of Mario Goetze, Luis Suarez, and a few special guest appearances.

The video also promoted its new, revamped Solo2 model ($200), which is currently available in stores. As the lights dimmed in the area where we’d watched the premiere, the focus shifted to Da Silva SantosÂ and a phone call with his father as he prepares to be victorious before a big game. Neymar Da Silva Santos Sr., a football force himself, offers words of wisdom, inspiration, and confidence, as other athletes and personalities go through their own pre-game rituals.

“The Game Before The Game” also featured superstars such as Serena Williams, Lil Wayne, and LeBron James getting ready for the big moment. It was exhilarating, full of a football fan’s own superstitions, routines, prayers, and sheer excitement about the event to come. Johnson later noted that the following Beats vignettes will roll out in more than nine countries and in five different languages with each version highlighting moments authentic to the country in which it airs.

I walked away with a feeling of heightened anticipation for this year’s World Cup. As the event ended, I strolled outside where inside Bryant Park, the New York Rangers game was playing on a big screen. I asked myself how I would have pre-gamed for this event if I had the Solo2. And as the crowd roared, I realized that all I have to do is stay authentic to myself and those close to me to achieve a champion’s success.

You can witness “The Game Before The Game” short and check out posters of the featured athletes on the following pages.