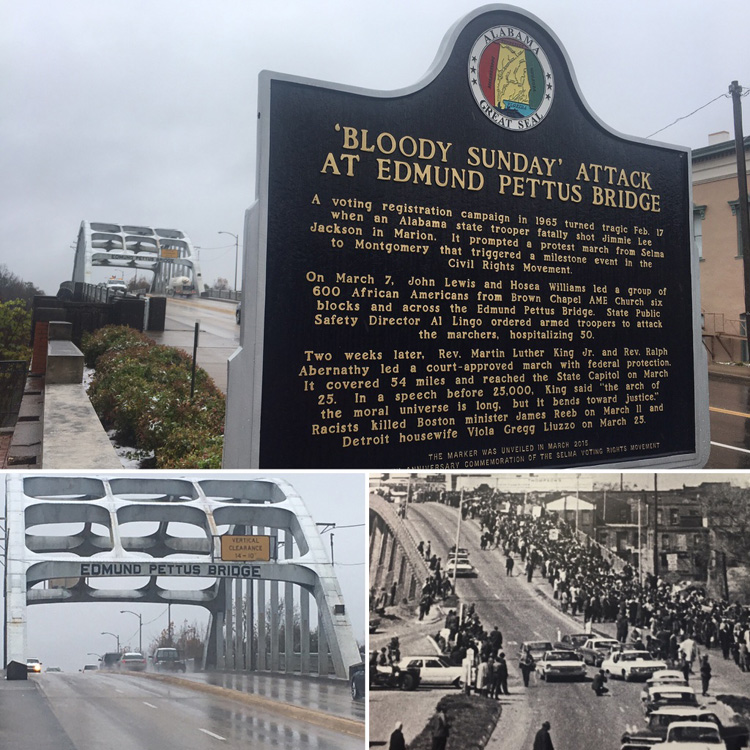 Last February, Toyota conducted a Black History Tour. As a child of the 1960s, and witness to riots in Baltimore after the assassination of Dr. Martin Luther King, Jr., I was super excited to attend to learn more about our history, and was joined by several journalist and blogger peers.

The mission was simple yet precise: Visit historical sites in the Northeast corridor and travel from site to site in the latest 2017 Toyota cars and compact SUVs.

Stops included: Madame C.J. Walker’s estate in New York State; Harlem in New York City; historic churches and sites in Philadelphia; and finally—the drive back to my home area of suburban Washington, D.C., to visit the newest jewel among the incredible collection of Smithsonian Museums: the National Museum of African American History and Culture (NMAAHC).

The trip was truly life-changing, especially learning about the history of our struggle in Philadelphia, and of course visiting the first-rate, superbly curated NMAAHC. During our multi-hour visit there, I was at an exhibit showing Revolutionary War hero James Armistead.

I froze.  My father’s name was James Armstead. Was this one of my ancestors who held a surname that evolved into mine? As I choked up with tears and pride for the way he fought to be free, I realized that my story was one of tens of thousands that others might have experienced visiting the museum that covers our history from pre-slavery to today.

In December, Toyota hosted yet another Black History Tour. The mission this time was to drive 2018 Toyotas from historical sites in Atlanta to the even deeper South, with additional stops in Montgomery and Selma, Alabama; Meridian, Mississippi; and finally Jackson, Mississippi, to witness the inauguration of another stirring display of our history, the Mississippi Civil Rights Museum.

In Atlanta, we experienced a bus tour of the Martin Luther King National Site, where an eternal flame burns in his memory; saw the Ebenezer Baptist Church where Dr. King often preached, viewed his statue on the ground of the Georgia State capitol building, and learned much from our tour guide, Tom Houck, who from 1965–1971 worked with the NAACP, SCLC, and other civil rights groups across the nation.

Houck was also a personal assistant and driver for Dr. King from 1966 until his assassination in Memphis, Tennessee. As a white American, Houck had many stories to tell about being branded a “nigger lover,” often at great personal peril.

After the Atlanta portion of the trip, we hit the road to Alabama (in an all-new 2018 Camry XLE with red leather)!

After several hours on the road, my drive partner, Tami Reed of TalkingwithTami.com, and I approached Montgomery, Alabama. This was during the time when a nominee for U.S. Senator of Alabama was being accused of sexual misconduct. To say it was a tense time in the state is an understatement, as war lines were political and racial.

My mind raced as we entered Montgomery, as Alabama has a terrible legacy of denying civil rights to African Americans. I remember Governor George Wallace blocking the doors of schools to thwart integration.

I remember brutal “Commissioner of Public Safety” Bull Connor, ordering police to attack peaceful protestors with high-pressure fire hoses and police dogs, while protecting Klansmen and any others who sought to espouse white supremacy.

The bombing of the “Freedom Riders” bus and the 16th Street Baptist Church bombing that took the lives of four little girls came to mind. Dr. King once called Birmingham a “symbol of hardcore resistance to integration.” All of this swirled and stirred up clouds of emotion within me.

And then I smiled when we pulled up to the Dexter Parsonage Museum, which chronicles the history of the Dexter Avenue Baptist Church. Visitors can tour the home next door where Dr. King and his wife Coretta raised their family while he was an Associate Pastor at the church.

The Parsonage, built in 1912, has been restored to its appearance when Dr. King and his family lived there. Much of the furniture was actually used by Dr. King, and it’s now a part of the National Register of Historic Places. While on the front porch of the Parsonage, we were alerted to look at the differences in the two front windows on the porch. The reason one looked newer is due to the ugly fact that his home was firebombed by Ku Klux Klan supremacists and was a constant target for hate.

From The Dexter Personage Museum tour, we drove on to the Dexter Avenue Baptist Church.

Dr. King served the church from 1954 until 1959, part of a long, distinguished line of pastors at this historic place of worship, located just one block from the once hate-filled State House. The church is now a World Heritage Site.

When we arrived, it was early evening, and the choir was practicing for Sunday services. Guess who got to sing with the choir? All of us on the tour! After meeting current pastor Rev. Cromwell A. Handy, Tour Director Wanda Battle gave us a tour of the church museum. Adorning a complete wall in the museum was an incredible mural of our history, from slavery to martyrdom.

Incidentally, our accommodations in Montgomery at the Renaissance Hotel were along a street that was once famous for its slave warehouses. Just by chance I noticed the signs while having breakfast at the hotel’s restaurant.

So now it was time once again to raise the emotional stakes, as we were about to drive from Montgomery to Selma, Alabama. It was the same route (from Selma to Montgomery) that freedom marchers took to show a watching nation that freedom in the Deep South was far from free.

Mother Nature threw a serious curveball during this leg of our journey, as a major storm blanketed the South in snow and ice. No worries, as our Camry’s advanced traction control systems and some common sense behind the wheel got us through.

We arrived in icy Selma in time to visit the National Voting Rights Museum, which took a close look at another side of the story. Many died for the right to vote, and the museum houses an actual period voting machine, which was beyond the reach and dreams of many in Alabama.

The National Voting Rights Museum is at the base of the infamous Edmund Pettus bridge, where Selma to Montgomery marchers were met with tear gas, water cannons, police dogs, and batons to keep them from continuing their equality march. This sad episode of American history played out on a national stage, as broadcast networks aired the carnage of what was to be named “Bloody Sunday” on televisions across the country.

Next, we headed to Jackson for the opening of two adjacent museums, one dedicated to the Civil Rights struggle in Mississippi. There was some controversy with this event. President Trump had accepted an invitation to attend, leading to a boycott of the opening by many of those who led the way during the struggle, including Congressman Lewis.

On that very cold morning of Saturday, Dec. 9, 2017, we assembled to watch history. Many luminaries spoke at the grand-opening ceremony, none more powerful and poignant than Myrlie Evers, the widow of civil rights martyr Medgar Evers, who was gunned down in his Mississippi driveway more the 50 years ago. Trump took a private tour and left the museum, giving meaningful remarks to those assembled before his departure.

There were several displays that really made me emotional. The first was a list of names of those lynched in Mississippi from the early 1900s to about 1970. There were so many panels of names, and these were very tall panels, I wondered whether some names had been repeated. They were not repeated. 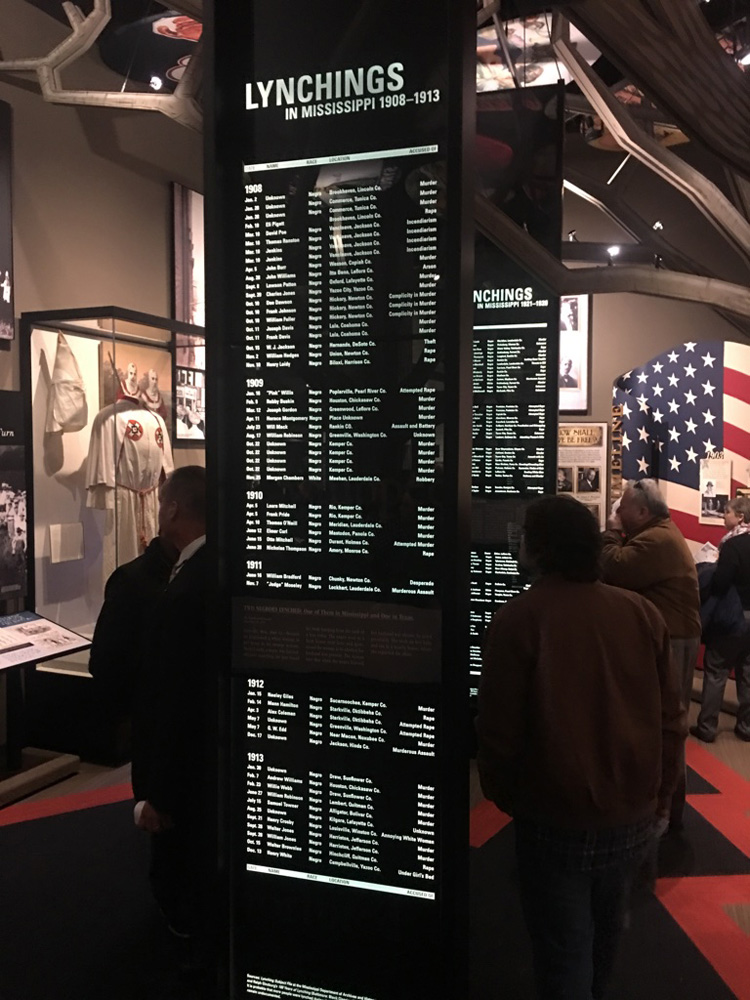 I viewed a display which included the photos of two young white people who sat with “coloreds” during a lunch counter sit-in, a common form of peaceful protest during those turbulent times. They were subsequently harassed, with condiments poured on their heads, and arrested. “I look so young in that picture,” said the diminutive woman standing beside me. “Is that you?” I asked her. She responded, “yes,” as she began to tell me her story of courage. Joan Trumpauer was one of scores of white activists who played significant roles in the struggle. 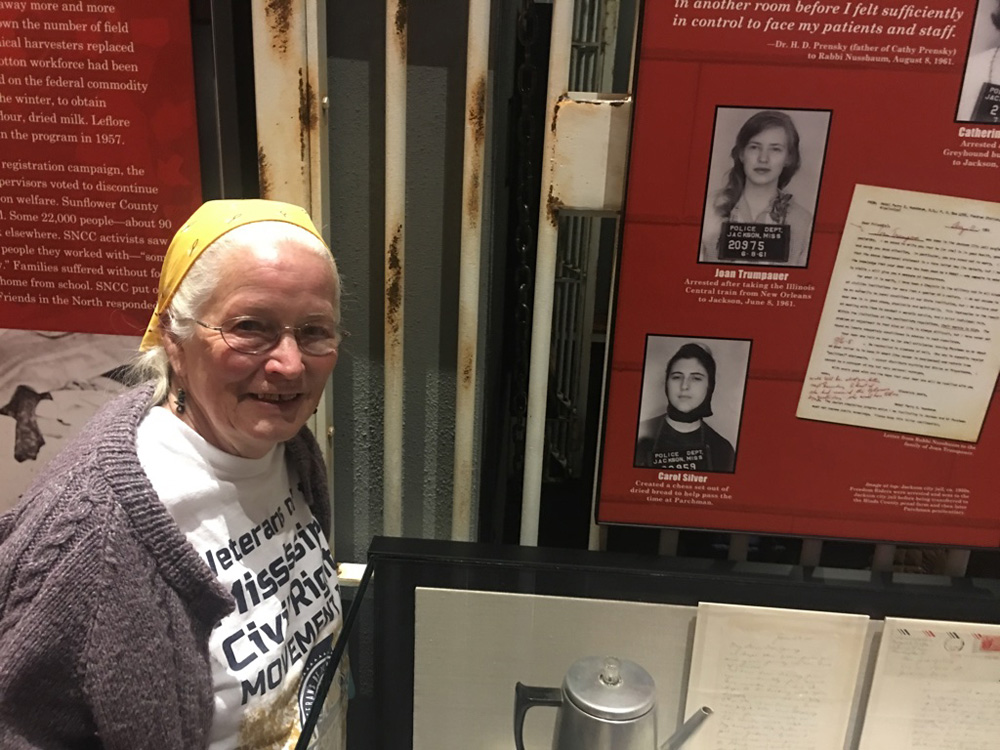 By the way, at each stop during our tour, a check was presented by Toyota.

The company is deeply committed to making an economic presence through plants and executive offices here in the U.S., and a social presence through the scores of programs, events, and facilities they’ve sponsored. And Toyota has demonstrated this commitment through these two amazing tours.