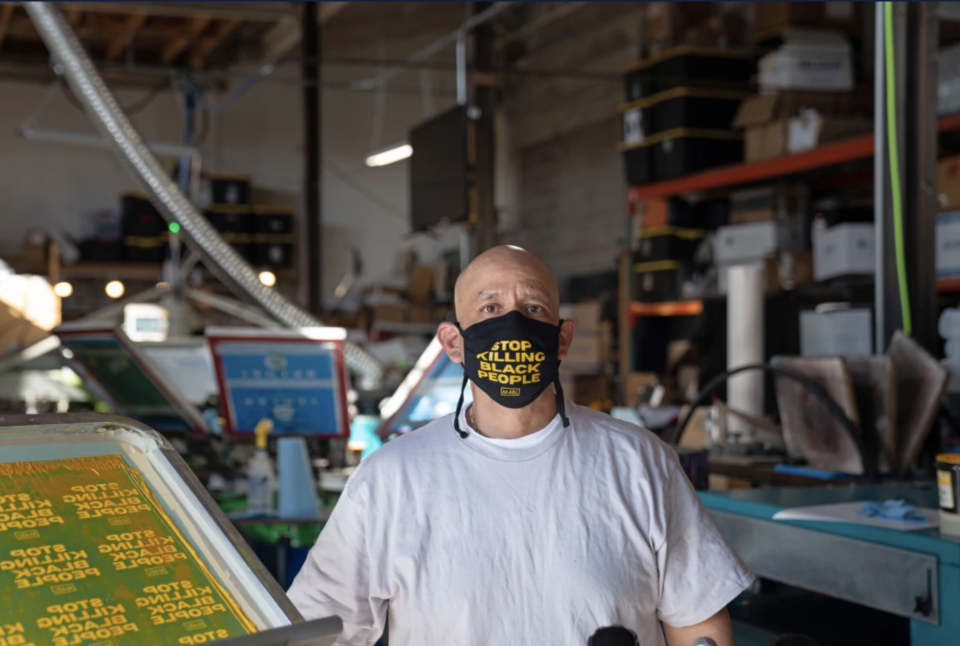 René Quiñonez wears the Black Lives Matter masks his company made for the May 2020 protestors. Image Source: J. Justin Wilson / Institute for Justice

A screen-printing company in Oakland, California, filed a lawsuit against the United States Postal Service after he shipped Black Lives Matter masks for demonstrators during Covid-19 during protests after the murder of George Floyd May 2020, were allegedly snatched by the agency, NBC News reports.

The cloth masks had the words “Stop killing Black people” and “Defund police” printed on them and were purchased by the Movement for Black Lives (M4BL). The shipment was headed to D.C., St. Louis, New York City, and Minneapolis, the state where Floyd was killed by a police officer Derek Chauvin. The four boxes had about 500 masks, each labeled as “Seized by law enforcement,” causing more than 24 hours in delay for the arrival packages, according to NBC.

René Quiñonez, the owner of Movement Ink, who manufactured the masks for Institute for Justice, a nonprofit law firm, said to NBC News his small family business has experienced the ripple effect due to the seizure.

“For us as an organization, as a company, and as part of our community, our intent was to support the many activities that were going on across the country,” Quiñonez said to NBC News.

Rep. Barbara Lee issued a letter in June 2020. The Postal Service claims that Quiñonez’s parcels “were detained solely because the external physical characteristics of the parcels were consistent with parcels in other non-related instances that were confirmed to contain nonmailable matter, specifically controlled substances, NBC News reports

Quiñonez is suing the U.S. Postal Service and U.S. Postal Inspection Service officials for allegedly violating his constitutional rights under the Fourth Amendment when they erroneously seized the boxes of masks without probable cause, a warrant, or reasonable suspicion, according to Revolt.

Quiñonez wants to bring light to his situation and hopes Americans become concerned that the government can take their masks containing their political beliefs.

“The fact that our government can just seize private property — either because of just general suspicion or because they know its political commentary — that’s a scary reality that we live in,” Quiñonez said, according to NBC News.