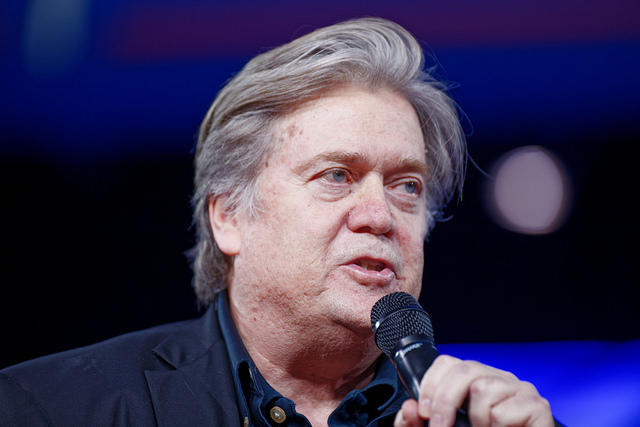 “Illegal immigration and trade deals are two sides of the same coin. It suppresses the wages of workers,” he said at the Minority Entrepreneurs Conference.

Bannon, who worked on Trump’s presidential campaign before being appointed to serve in his administration, was invited to be the keynote speaker of the event, which was organized by Black Americans for a Better Future, a conservative SuperPAC that aims to empower African American entrepreneurs.

During his speech, Bannon talked about helping entrepreneurs of color by granting them access to capital for and eliminating unfair competition. He also discussed Trump’s push to bring manufacturing jobs back to the U.S. and pursue economic nationalism.

According to the PAC’s founder, GOP strategist Raynard Jackson, Bannon connected with the attendees and received a positive response.

“He speaks in a language that we understand,” Jackson told Black Enterprise. “He, himself, is a small business owner, so he understands the government regulations necessary to set up a business. He also understands public policy. He understands the frustration of an entrepreneur who may be trying to do business with a federal agency.”

Although immigrants have strengthened our economy and society, Raynard said he agrees with Bannon’s anti-immigrant sentiment, arguing that “30 million people in this country illegally [are] competing with blacks who have low skills or no skills for jobs.” He added that companies and business owners who exploit undocumented workers for cheap labor, however, should be punished, including President Trump, who paid undocumented workers as little as $4 for a demolition project. “No president is above the law,” said Jackson. “If he, himself, violated the law, he should be punished.”

When asked about the shortage of African Americans in senior positions in the Trump administration, Bannon called the situation “inexcusable.” Raynard says he is working with the president to resolve this issue. “What we got to hire is real black Republicans, no more Democrats or phony black Republicans,” he said promising that there will be more African Americans in the Trump administration in 2018.

Despite multiple accusations from women who’ve accused Judge Roy Moore of sexual assault and child abuse, Bannon endorsed his run for a Senate seat in Alabama. “This country needs somebody to fight for them. I fought for Trump and I’ve fought for Judge Moore,” he said before the crowd erupted in applause.

Jackson agreed, arguing that the victims’ claims are baseless. “There have been no charges against him legally. There has not been a criminal complaint filed against Roy Moore, ever,” he said. “Women do not have a right to be believed. They have a right to trial by a jury of their peers, but if they don’t have any evidence, these guys should not be convicted in a court of public opinion. They must be tried in a court of law.”