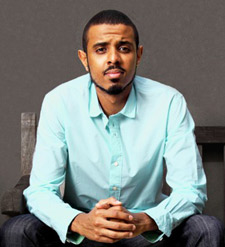 Addisu put more stock in his dreams than the market

Anteneh “Anthemâ€ Addisu, 25, loved working on Wall Street. Making close to $150,000 a year, the Duke University graduate was among a handful of Black men living the fast paced, Manhattan life of a Wall Street trader. During his first year in finance, Addisu’s take-home pay helped care for his mother, who’d been laid off while he was in his senior year of college. But a prestigious job, six-figure salary, and the accomplished joy of being able to support his family wasn’t enough. Addisu wanted to be a rapper. So he approached his mentor, DG, with plans to quit his career and pursue dreams of working in hip-hop. “He didn’t take kindly to that,â€ says Addisu, with a chuckle. “In hindsight it did sound foolish. [DG] said, ‘Do you have any music?’ I said, ‘No.’ He made a deal and said he’d finance a demo and if it wasn’t good, I’d commit to focus on my career.â€

The demo, filled with Addisu’s smooth-yet-persistent and eloquent vocals about the realities of life, impressed DG so much that he decided to partner up with the aspiring artist and make a hefty financial investment into his rap career. “He was the person whose word I respected. When you make a believer out of a naysayer, that was all I needed,â€ says Addisu, who performs under the name Anthem. “He’s kinda my Quincy Jones, in a sense, of my development as a rapper.â€

Despite the surprising support, Addisu’s radical career shift didn’t happen overnight. Continuing to work 12-hour days on Wall Street, he headed home at night and locked himself in a studio to manifest his musical aspirations. “Weekends I didn’t go out,â€ he recalls. “When you work for your dreams, it’s tough to waste time.â€

That focus has been rewarded. In the summer of 2009, Addisu left the world of finance for a full time career as an MC. Since then, he’s performed shows in DC, California, and opened for critically acclaimed rap acts like B.O.B. and Lupe Fiasco. This spring, he’ll perform at the South by Southwest Music Conference, while dropping his first mixtape Manhattan Music, Vol. 1, hosted by 50 Cent‘s DJ Whoo Kid. A documentary, about his grassroots marketing and promotions hustle as a rapper, is also in the works.

“I wouldn’t rest my hat on my own talent. My transition has been successful because of organization,â€ Addisu says. “When you pursue a dream, you’re effectively a start up business. You gotta be organized, but you should never keep a dream to yourself. And never wait on a cue from the world that you’re in the right place. You should just move and act.â€

Check out these related links…

In the News: Comcast and NBC Make History