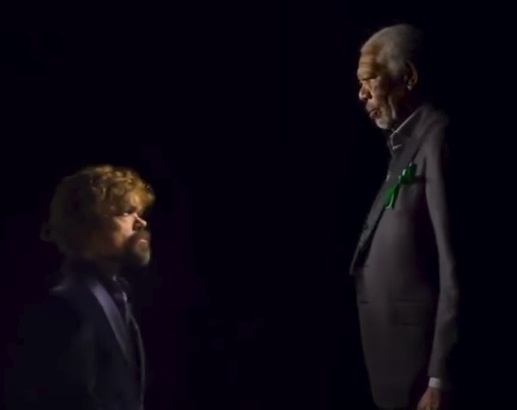 Tiffany Haddish won’t be the only African American starring in Super Bowl commercials airing on Sunday when the Philadelphia Eagles take on the New England Patriots.

PepsiCo, revered for its viral and entertaining Super Bowl commercials, is stepping up its game this year by bringing together Hollywood veteran Morgan Freeman and hip-hop legends Missy Elliott and Busta Rhymes to feature in a joint ad campaign for Mountain Dew and Doritos. And, former American Idol star Todrick Hall will appear in an ad for M&M’s alongside actor Danny DeVito.

In a 30-second teaser uploaded on YouTube by Doritos on Jan. 17, Freeman can be seen facing off against Game of Thrones star Peter Dinklage in a rap battle. Another video uploaded a week later shows Elliott and Busta Rhymes coaching Freeman and Dinklage as they prepare for their cameos.

This won’t be Elliott’s first time in the Super Bowl spotlight. In 2015, she thrilled fans with her surprise half-time performance alongside Katy Perry at Super Bowl XLIX.

“First of all, when you got [Peter Dinklage] and [Morgan Freeman] with [Busta Rhymes] who is turning that down?,” Elliot, 46, told Billboard. “I wanted to be a part of this history right here. That was an epic moment, hearing those names together.”

Other companies, including M&M’s, have released their commercials on social media ahead of the Super Bowl LII game to connect with new generations of fans. M&M’s decision to tap Hall for a Super Bowl ad was based on his huge social media following.

Hall gained global attention competing on American Idol in 2010, reaching the semi-finals. He has since gone on to become a YouTube personality and has appeared as a judge on RuPaul’s Drag Race.

“We often collaborate with social influencers to create and share branded M&M’s content in their own colorful and fun way,” M&M’s spokesperson Allison Miazga-Bedrick said in a statement. “This time, we flipped our approach and surprised Todrick Hall’s fans with an unexpected appearance in our Super Bowl LII commercial.”

For the first time in seven years, Groupon will be airing its own Super Bowl commercial after tapping Haddish to be their spokesperson. She came about the gig after she shared her personal Groupon story on Jimmy Kimmel Live!

While it was a major win for Haddish, it’s also a major move for the discount e-commerce marketplace. A 2015 study released by Nielsen reported that African American households earning $75,000 or more are growing rapidly. The report also said black America might be represented by 75 million people in the United States, about 20% of the U.S. population.

Super Bowl LII will take place at the U.S. Bank Stadium in Minneapolis on Sunday, Feb. 4. Kickoff is scheduled for 6:30 p.m. ET.