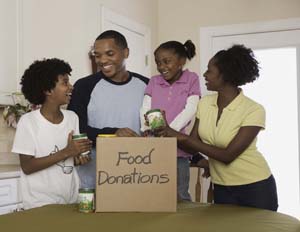 When it comes to making a donation, writing a check is so last century. Social media is making it possible for users to contribute right from their Facebook timeline or Twitter stream. Cheryl Contee, partner at Fission Strategy, specializes in helping non-profit organizations and foundations use social media to create social good.

At the 2012 SXSW Interactive Festival, her panel “21st Century Giving: Social Philanthropy’s Rise,” featured speakers from both sides of the “giving” coin: philanthropic organizations who have incorporated social media into their donating and reporting process and representatives from social media mainstay’s like Twitter and YouTube–platforms that make giving on social media easier.

“My inspiration for putting together the ’21st Century Giving’ panel comes from what I see online with how powerful an individual can be in collective action with others; that wasn’t possible before social media,” said Contee. “I wanted to talk about the things that are happening now, but also inspire the audience to think broadly about what can happen as the tools come online for people to not only move messages around the world but also move money around the world.”

Wondering how social media can enhance your giving process? Here are 4 tips from the experts:

Make Giving Fun. Robert Wolfe, co-founder of Crowdrise, Â a social networking site for fundraisers, is obsessed with finding new ways to make fundraising enjoyable. “Even though [they] may seem at odds with each other, we want to make people self-interested when giving back,â€ Wolfe said. “There are some incredibly serious causes on Crowdrise, but you can still have fun on Crowdrise.â€

The online fundraising site incorporates comedy into the giving process. “One day we sent an email out. It read: ‘We have a completely new way to donate. We are now accepting donations in the nude,'” laughed Wolfe. “[Humor] is not typically acceptable in the charity space but we are trying to make it fun.â€ For those that want to donate anonymously, but still get the public acclaim, Crowdrise has set up a program that will leak your actions even if you’ve chosen to donate “anonymously.”

Use Video. If you have a global campaign, YouTube is a great match since 70% of YouTube views come from outside of the U.S., explained Ramya Raghavan, the nonprofits and activism manager at Google/YouTube. Also, YouTube now has a graph on videos that reports the location, age, and gender of whoever is watching the video. Raghavan says you can use this tool as you think about your donor campaign.

“Video is relatively resource heavy,â€ she said. “Nonprofits struggle to make good videos.â€ Look to the YouTube community to give, not in the classic sense, but with the volunteering of time. Many in the community are willing to make videos on behalf of nonprofits.

Engage your donors. Engage your audience by incorporating giving into their normal routine. For example, Crowdrise has implemented an awards’ system whereÂ  donors earn a crest after giving when you purchase a cup of coffee. “People are obsessed with getting these crests. Even celebrities. It incentivizes people to participate. It’s like a points program, too. People can redeem points with malaria nets.”

The UNitade program in Cameroon has raised millions of dollars through micro-giving. “The way that they are raising funds is innovative,” remarked Michaelyn Elder, director of online communications for the United Nations Foundation. They incorporate a small tax of a dollar every time you buy a plane ticket. The money is used to buy HIV medication for pregnant women. Using this method over 5-10 years, they have eradicated the transmission of HIV from mother to child.

Use Apps. Finally, don’t forget to use third-party applications like Twitpay, Micropay and HelpAttack!, which make donating easier. “They [third-party apps] work in different ways, but essentially the idea is the same,” said Claire Diaz Ortiz, who works in the social innovation department at Twitter, Inc. “They help individuals donate to their favorite causes from within the Twitter [and Facebook] platforms.â€