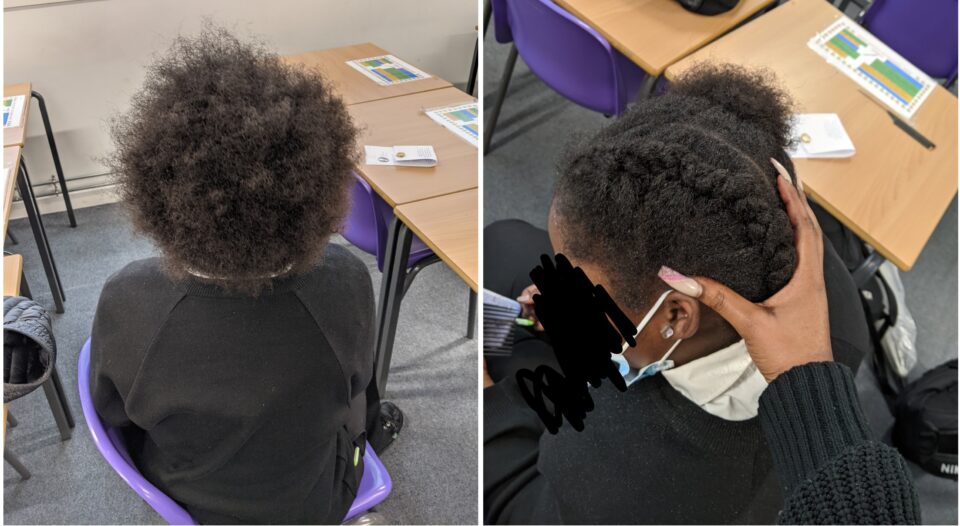 Last month, British teacher Vanessa Sefa shared a post about the support she provided to one of her students to inspire more Black teachers to join the UK’s education system.

Sefa says that on Oct. 1, the first day of Black History Month in the UK, one of her 12-year-old students came into her classroom at The Archbishop Lanfranc Academy distraught. Her hair had gotten wet and started to shrink.

“In under 15m & with the wrong tools I got the girl out with 2 rushed cornrows,” Sefa shared in a tweet. “Being black & that age, hair can mean so much. This is one of the many reasons we need more #Blackteachers #BHM.”

According to ABC News, the student, Purity Agyeman, lost her mother at the age of 9 and is being raised by her father. As a result, she told Sefa she doesn’t really know how to properly care for her hair on her own.

“With tears in her eyes, she expressed that she wasn’t going to go around school like this all day and would rather go home,” said Sefa. “Her hair had started to shrink and consequently tangle up as a result of the friction from her hood and the rain battering it. Purity explained the situation, took off her hood and asked me if I could braid her hair.”

Sefa told ABC that she empathized with Agyeman because she recognizes that hair plays an important part of self-identity for anyone; but is also aware of the added cultural and sometimes political connotations that are tied to the way Black women and girls wear their hair.

“Due to these multi-layered narratives, Black people are often hyperaware of what their hair says about them,” she explained.

“This aside, Purity is entering her teens, some of her most formative years. Even if I thought she looked fine, I wasn’t going to turn her away, pat her on the back and tell her she looked fine when her self-confidence was temporarily fragile. It wasn’t my place, and a pep talk isn’t what she asked for. I doubt anyone would want that response instead of actual help, if your outfit or makeup, for example, had been ruined by rain.”

According to Wikipedia, the Academy is located in the South London district of Croydon, where only 11% of the population is Black. Overall, GOV.UK’s 2021 Ethnicity Facts and Figures reported that less than 3% of teachers in the UK are Black.

In light of these statistics, Sefa hopes that her post will encourage more Black people to consider careers in education. Not just because of the optics of representation, but also to offer students of color more balanced and nuanced perspectives.