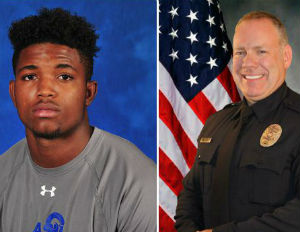 According to reports, an Arlington, Texas, police officer who killed an unarmed college black teen was fired Tuesday. Officer Brad Miller made mistakes that, the city’s police chief reported, caused a deadly confrontation that put him and other officers in danger.

The officer had pursued 19-year-old Christian Taylor through the broken glass doors of a car dealership showroom after being called to the scene of a suspected burglary early Friday morning, but did not tellÂ his supervising officer, Johnson told news media.

Instead of following protocol and helping to set up a perimeter around the showroom, Miller confronted Taylor and ordered him to get down on the ground, Johnson added. Taylor did not comply. Instead, he began “actively advancing toward Officer Miller,” Johnson said.

Miller’s field training officer, who had followed Miller into the showroom, drew a taser but would soon find that Miller had drawn his service weapon and shot Taylor. Miller fired his gun three more times after that leading to the teen’s death.

This news comes just days after the anniversary of the death of Michael Brown, an unarmed Ferguson, Mo. teen who was fatally shot by Officer Darren Wilson. Wilson would be cleared of wrongdoing, but has reportedly said he is now “unemployable,” due to the backlash of the case.