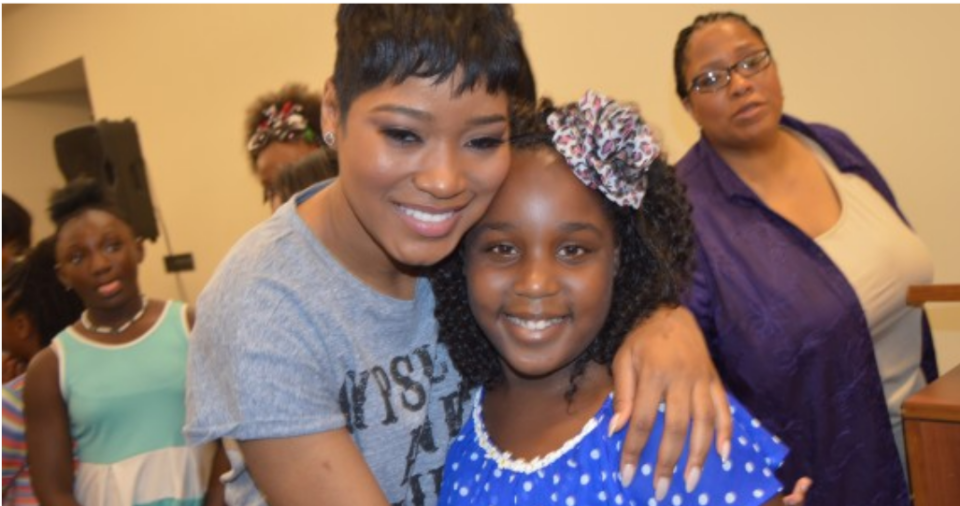 Note: This is a commentary and does not reflect the views of BLACK ENTERPRISE

One thing is certain: Keke Palmer IS an incomparable talent who has BEEN a star.

But the road to blockbuster success has been a bumpy one, albeit one the seasoned Nope actress has still navigated with precision.

Case in point: Palmer has made history as the youngest talk show host ever, tackled the emotional labor of being the first Black woman to star in her own show on Nickelodeon, and has been the youngest and first Black Cinderella on Broadway. Two snaps for this win and a face palm to the haters who are trying to hold her at bay when she’s been that girl bringing the whole table to brunch with Hollywood bigwigs.

A Twitter user recently questioned the mainstream popularity of Palmer, who stars in Jordan Peele‘s latest hit film Nope, and Zendaya, who has won an Emmy for her work on HBO’s drama series Euphoria. Many contrasted the success of the two actresses based on colorism.

Folks were basically trying to say Zendaya’s lighter skin has skipped her to the top of the A-list, suggesting that Palmer hasn’t been afforded the same type of top opportunities. That couldn’t be further from the truth.

But Palmer quickly cleared the air, noting her achievements and longevity in the game to those who may have been unaware that she has opened doors for girls of color and BEEN making her mark:

A great example of colorism is to believe I can be compared to anyone. I’m the youngest talk show host ever. The first Black woman to star in her own show on Nickelodeon, & the youngest & first Black Cinderella on broadway. I’m an incomparable talent. Baby, THIS, is Keke Palmer.

But no one reaches the pinnacle of success without bruises and this conversation reminded me that Keke has in fact opened up about the pain of experiencing colorism in her career.

Seven years ago my daughter met Keke in 2015 at a conference and asked her about her experiences in Hollywood given her brown skin color. See, my daughter who is the CEO of BrownGirlMagic.com, was once an aspiring actress. Her question moved Keke so much that she was brought to tears talking about it.

Check out the video:

It was truly a pivotal moment because clearly colorism has been an issue that has affected Keke in the past. She also once told the Hollywood Confidential Panel that when she was about 5-years-old she wished to have light skin. It bothers me too because a beautiful and talented brown girl is often overlooked because people are stuck on color rather than allowing an actress’ talent to speak for itself.

When Mikaela asked Keke that question, Keke truly filled her soul by letting her know that her talents have nothing to do with decisions that are made because of what’s on the outside.”

Folks truly need to do their research and let Keke live in this moment of monumental success with Nope hitting number one at the box office, earning $44 million in a weekend. It’s not just because it’s a Jordan Peele joint, it’s because Keke has been a young woman who we love, support, and wrap our arms around with understanding. She’s Akeelah. She’s been our little sister, our daughter who we’ve watched over and wanted to protect from rappers, and now she’s a phenomenal woman who we have watched grow, glow and walk in her greatness.

Colorism has been pervasive in Hollywood and cannot go unchecked. I get that. But as opportunities open up for darker-skinned people of color in roles like history-making Black Panther and with more Black directors taking the helm, we must ask ourselves if we (Black folks) are the ones being the keeper of colorism.

Why is it so difficult to let go of stereotypes when it comes to our own people? Why are we causing unnecessary conversations and pitting accomplished Black women against each other with color triggers for no reason? We know colorism has been an issue, but at what point are we acknowledging its existence versus constantly leaning into it? Where’s the line?

Imagine how Keke felt having to once again address this issue out of nowhere when the focus should have been on her current piece of work.

We have to stop perpetuating this colorism convo and stop stirring the pot. It’s the fact that everybody runs with it and makes it a national conversation during her film’s opening weekend when she should be shining. Keke has done the work. She’s suffered to soar and get to where she’s comfortable in her own skin and yet y’all bring this up yet again.

Let’s learn not to be the playground bully giving uncalled-for lip service and let’s protect Black women like we always profess we’re supposed to do.