The Coalition of Schools Educating Boys of Color 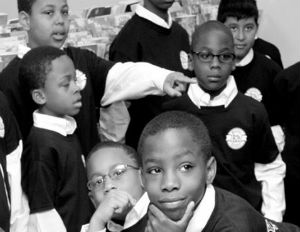 How many successful organizations begin because of a letter?

Ron Walker, executive director of the Coalition of Schools Educating Boys of Color, says the seed of his organization was planted by a letter he received in 1986 from a former honor student of his–now behind bars for murder at Frackville State Penitentiary in Frackville, Pennsylvania.

Although Kevin Johnson maintained his innocence, he had no chance of parole. After seeing his former teacherÂ on BET, Johnson wanted to get in touch with Walker. Walker eventually received a call from the prison’s school principal, because Johnson wanted him to speak at itsÂ GED graduation ceremony. Walker, though living in Boston and nearing retirement, immediately agreed.

As expected, seeing Johnson again wasÂ emotional. But, the words of the valedictorian that day spoke especially deeply to Walker; “Although I’m incarcerated, I’m now free because I’m educated.â€ It struck Walker that perhaps retirement wasn’t looming as closely on the horizon as he thought–he might have more to give.

With virtually no money or staff, the idea forÂ COSEBOC was born; an organization that providing the best available professional development to school teachers and leaders educating boys and young men of color. Ten years later, COSEBOC is now holding its tenthÂ annual Gathering of Leaders for its national membership and K-12 school leaders, May 18-May 21 in New York City.

The gathering includes informative workshops on cultural pedagogy, trauma, the school-to-prison pipeline, rites of passage, and more. It will also include influential speakers, tours of historical sites and successful schools in New York City, and a recognition event to applaud a decade of providing professional development in the field.

And what of Kevin Johnson? Walker says he recently received a letter from him saying that his accuser has recanted her entire story, paving the way for aÂ post-conviction release hearing. “There’s a lot of reason to believe that he will get out after all these years,â€ Walker says.

For more information about COSEBOC and the annual gathering, visit its website.