'The Dress' is Being Used to Fight Domestic Violence 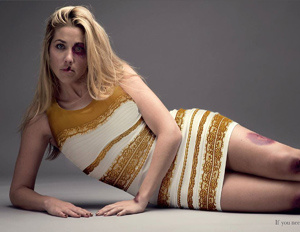 A photo of a dress went viral on the Web in February after social media users swore it to be black and blue, while others argued that it was white and gold. The debate even took on a whole new life via a Twitter hash tag,Â  #TheDress,Â causing quite the divide as #teamblackandblue and #teamwhiteandgold debated over the true color of the dress. The Salvation Army in South Africa has bridged the gap, however, between the two opposing worlds in a new domestic violence campaign.

The now viral PSA photo features a woman wearing the dress, in gold and white, with the words “Why Is It So Hard To See Black And Blue?”. It continues to read, “The only illusion is if you think it was her choice. One in 6 women are victims of abuse. Stop abuse against women.” The most awakening part of the photo is the woman, who is severely bruised on her eyes, mouth, wrist and legs.

Salvation Army SA has taken the message toÂ Twitter and their varying social media platforms with hopes of encouraging people to help end domestic violence. In preparation for International Women’s Day that took place on March 8th, they tweeted, “It’s #InternationalWomensDay on Sunday. We care for abused/trafficked women worldwide. Help us help them. #TheDress.”

This is one of several recent public stands against domestic violence. During the Super Bowl, the NFL aired a number of commercials and PSAs to get the nation’s attention. One was based on a real 911 call in which an abused woman called the helpline to “order a pizza” because her abuser was in the room with her. The commercial was part of the league’s larger “No More” campaign.