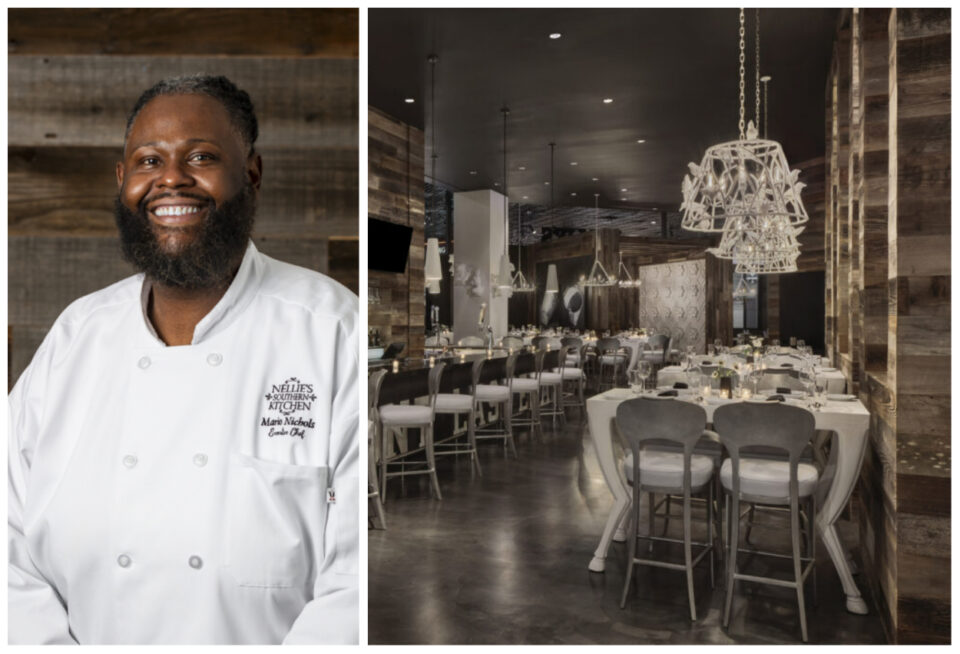 Las Vegas is known for its casinos, live shows, exotic nightlife, and world-class restaurants like Spago by Wolfgang Puck and Din Tai Fung at the ARIA Resort & Casino. Now, visitors have one more reason to flock to the City of Sin: authentic Southern-style cuisine.

In June, Denise and Kevin Jonas Sr., the parents of the multiplatinum musical trio the Jonas Brothers, celebrated the grand opening of Nellie’s Southern Kitchen at MGM Grand. Their famous sons, Kevin II, Joe, and Nick Jonas, were in attendance, along with their youngest son, Franklin, and two of the couple’s grandchildren. The ceremony welcomed guests to a seat at the Jonas family table with live music, generous hospitality, a folkloric aesthetic, and, of course, Southern comfort food.

The 11,000-sq-ft restaurant comes six years after Jonas Sr. opened the original Nellie’s restaurant in his hometown of Belmont, North Carolina, as an ode to his late grandmother Nellie.

“This is a world hub. People come from all over the world, and we wanted to introduce Nellie’s style of Southern cooking,” Jonas Sr. tells BLACK ENTERPRISE. The Jonas Brothers had a five-night residency at the MGM Grand in June, giving more of a reason to open a new location in Vegas. “It just seemed like the right home,” Jonas Sr. adds.

Jonas Sr. says his grandmother’s cooking, particularly her homemade biscuits, inspired him to open the first restaurant. “Throughout my travels around the world, one of the things I loved was coming home, and my grandmother would have a pot of chicken and dumplings prepared for me,” he recalls.

Now, he hopes to impart that same sense of warmth and love through his grandmother’s cooking to patrons in Vegas. “I walked up to a table that was eating chicken and dumplings [at Nellie’s in North Carolina],” he said. “I saw the look on their faces. And I said, ‘How was your meal?’ And this lady turned around and said, ‘I feel like my grandmother just gave me a hug.’ And I was like that will forever be my goal for this restaurant.”

“When I first met the Jonas family and heard about Grandma Nellie, I immediately noticed their passion for great food, having fun, and caring for others,” Nichols said in a statement. “Nellie’s Southern Kitchen reminds me of cooking with my parents and grandparents, growing up singing songs while making incredible food passed down from generation to generation.”

Nichols’ love for cooking developed as a child when he made fried chicken and collard greens with his family on Sundays. Although he loved helping in the kitchen, he never imagined working in culinary arts. “I don’t know if I ever really thought that I would be doing this professionally. It was just a hobby right out of high school,” he tells BE.

His interest in the craft piqued while he was working in the dish room for a restaurant that catered for the Charlotte Hornets before the NBA team moved to New Orleans. That’s when he asked his boss at that time to give him a shot in the kitchen. “He finally gave me an opportunity to cater [one of the team’s private] jets. And when I got up on that jet, and I saw the NBA players, it was just like one of those things [that affirmed that] this is what I want to do.”

Nichols’ culinary journey continued in North Carolina, where he operated a barbecue pit at Sweetwater Bar & Grill and rose through the ranks to become executive chef, developing original menu items, including his award-winning shrimp and grits.

In 2015, Chef Nichols opened his own restaurant, Grits N Greens, in Lowell, North Carolina, which flourished under his leadership as executive chef and managing partner. When the COVID pandemic hit in 2020, Grits N Greens provided food for more than 2,000 first responders while maintaining operations. Later that year, the chef opened Smith’s Soul Food and Bistro in North Carolina, which instilled a culture of good music, a great ambiance, and excellent service.

While Nichols was making a name for himself in North Carolina, he grabbed the attention of Jonas Sr., who developed an affinity for his cooking and magnetic personality. After several visits to his restaurant, he knew Nichols was the ideal person to lead the future of Nellie’s Southern Kitchen. Jonas Sr. tapped Nichols as Nellie’s Southern Kitchen executive chef in Belmont in September 2021. In this role, Chef Nichols both enhanced 100-year-old recipes handed down from Grandma Nellie and added his own flavor to the menu. Within a year, Jonas Sr. convinced Nichols to move west to run the kitchen at the second Nellie’s location. Nichols admits that leaving his home state was tough, but he was up for the challenge. “I’m ready to make my mark in Vegas,” he says.

At the new Nellie’s restaurant, Nichols has added his own spin to the menu while maintaining Nellie’s traditional recipes. One of the meals he added is his signature Southern egg roll, which consists of barbecue chicken, collard greens, and mac and cheese. The menu also includes his Nashville’s hot lobster and waffle specialty and his award-winning shrimp and fried grits dish, which was honored as “Best Entrée” at the NYC Autumn Food Festival.

“They’re fried grits cakes with a Cajun cream sauce. Those are a must-try if you come to Nellie’s.”

Nichols says customers can also expect a glass of sweet tea and “just a warm, good environment.” Ultimately, he aims to make all patrons feel like “they just left grandma’s house on Sunday,” he said. “It’s nothing like Southern hospitality. When you come into Nellie’s, we’d like to think everybody feels like they’re at home.”