Here's What You Missed at the Women of Power Summit 2019 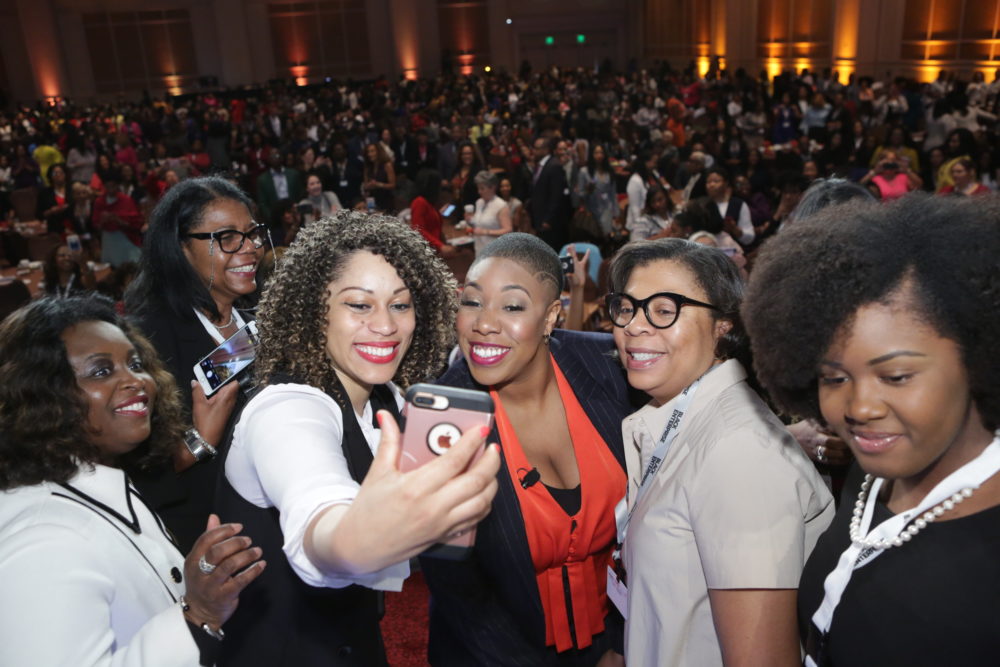 It’s hard to remain unbiased when you’re responsible for hosting the largest summit and celebration for professional black women. So, we’ll just go right ahead and say it. The 14th Annual Women of Power Summit hosted by ADP was incredible.

From the moment women stepped foot into The Mirage they were greeted warmly by members of the staff and volunteers during registration (hosted by Southwest Airlines). Women immediately began to network after receiving swag bags. Shortly after, attendees gathered at the Fashion Show Mall for the ultimate girls trip to Macy’s for a shopping excursion. They were treated to exclusive deals, free manicures, hair styling, and were teamed up with personal stylists thanks to Macy’s.

[CHECK OUT THE WOMEN OF POWER SUMMIT DAY 1 PHOTO GALLERY]

After hours of girl’s time on the strip, women reconvened at The Mirage for the Legacy Awards Reception hosted by Toyota. Monica W. Peterson, director of affiliate vehicle planning and pricing product planning & strategy for Toyota Motor North America, welcomed women to the reception and challenged women to get out of their comfort zones during the summit and level up! Earl “Butch” Graves Jr., president and CEO of Black Enterprise, also encouraged women to rejuvenate their purpose.

And may we say that the women looked stunning and showed out. Which was to be expected in anticipation of the 14th Annual Legacy Awards Gala hosted by PepsiCo. After all, who wouldn’t want to get fancy for an evening with Chaka Khan; Cynthia Marshall, CEO of the Dallas Mavericks; Vashti Murphy McKenzie, the presiding prelate of the 10th District AME Church; and Pulitzer Prize-winning author Alice Walker?

The awards gala was hosted by Caroline Clarke, chief brand officer of Women of Power. Clarke reminded women that they are royalty. “Keep calm and carry your head high—and always remember there’s a crown on it.”  She then led women to empower one another with affirmations and hugs.

Cynthia Marshall received the first award of the night and her words to the women were nothing short of inspiring. “Cry like a baby, fight like a girl, change the world like a woman.”

Alice Walker received the second honor for her literary genius and contributions to society as a change agent. She spoke passionately about black Americans’ journey in the states. “If we love ourselves and deeply feel that love and deeply live that love, we cannot be defeated,” she boldly exclaimed.

Chaka Khan received the third honor of the night and reminded women to be fearless and for one another. “Don’t ever stop reaching, loving, and inspiring. We are in this together!”

And the granddaughters of the late and phenomenal Barbara Graves presented Bishop Vashti Murphy McKenzie with the esteemed Barbara Graves Legacy Award. During her speech, she spoke about how faith has brought her thus far. “No one gets anywhere by themselves.”

Next was the Women of Power series Conversations That Count with Legacy Award honoree Bishop Vashti Murphy McKenzie.

“The nature of lane slaying means that everyone won’t be happy with you slaying in your lane,” she exclaimed. On stage, she dropped countless gems and at the end of her address, hundreds of women joined her on stage to dance to Alicia Keys’ “Girl on Fire.”

A Chat with Kamala Harris

Sen. Harris and Star Jones, president of the Professional Diversity Network, sat down lawyer-to-lawyer and spoke all things politics, race, and what’s to come on her political campaign as the first black woman to run for president in 50 years after Shirley Chisholm.

With all of the buzz around her history and former career as a prosecutor, she made it clear that she made a conscious decision based on how people of color were treated within the criminal justice system.

She reminded women that, “If we are not active, we cannot count on the right thing to happen.” And when it comes to the 2020 presidential elections, she says that she is ready to lead and that optimism is one of the words that define her campaign. “Optimism is about saying we can do this,” said Harris.

After a series of thought-provoking and inspiring conversations, it was time for a much-needed break sponsored by PepsiCo where the women powered up for the rest of their day.

[CHECK OUT THE WOMEN OF POWER SUMMIT DAY 2 PHOTO GALLERY]

During downtime, attendees explored the Power Showcase where ADP had an artist drawing caricatures; they tested Accenture’s newest innovations in the health, retail and sports industries; charged up their phones courtesy of AT&T; received hand massages courtesy of Cricket; got their makeup done by Estee Lauder and MAC; and explored the Macy’s accessory wall.

Women spoke with wellness experts and took selfies in front of the See-Your-Future inspirational wall presented by Prudential. And to top things off, Toyota hosted car karaoke and created a life-size Black Enterprise magazine in which women were able to take photos. Attendees also had their hair styled by professional stylists provided by Walmart. JPMorgan Chase hosted a series of financial planning sessions.

The incomparable Valerie Jarrett, senior distinguished fellow at the University of Chicago Law School and former senior adviser to President Obama opened up the first series of BE Conversations That Count hosted by Prudential.

Sanders and Jarrett had women on the edge of their seats as they spoke about the Obama administration; being friends with Michelle Obama; career; and life.

Her advice to Sanders and other women coming up in the ranks was, “The adventure is in the zig-zag.”

[CHECK OUT THE WOMEN OF POWER SUMMIT DAY 3 PHOTO GALLERY]

The series continued with a powerful conversation between Stacey Abrams, former Georgia gubernatorial candidate and founder of Fair Fight and Caroline Clarke, hosted by Dell.

Abrams was an open book about her success after her campaign where she gained more than she lost after the gubernatorial election.

“Don’t let anger undermine you, let it galvanize you,” she told women. And she spoke about being visible. The moment was filled with gems and standing ovations coupled with women shouting ‘Yes’ from the audience. “I’m a natural haired, heavyset black woman with rich mocha skin and a gap. You can’t miss me”

With over 1,000 attendees, a roster of wonderful speakers, and all of our sponsors—the event wrapped up with the critically acclaimed Michael Jackson ONE Cirque du Soleil show. And we went all out uniformly dressed in black and white. The ladies even topped off their ensembles with M.A.C.’s Ruby Woo lipstick courtesy of Estée Lauder.

We assured you that this year’s summit was going to be one for the books and we exceeded our own expectations! Just in case you were wondering, next year will be an extravaganza as we celebrate 15 years of Women of Power at The Mirage. Mark your calendar for March 3 – 8, 2020!